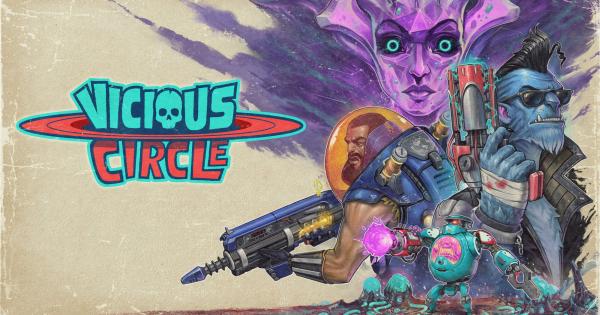 August 13th, 2019 marks the release of Vicious Circle, an asymmetrical "uncooperative shooter" from the group that brought you RWBY: Grimm Eclipse and Bendy and the Ink Machine.

Vicious Circle is the second game developed in-house by Rooster Teeth Games. It features five players fighting through five rounds of combat, with four players taking the role of mercenaries, and one taking the role of "Peggy Sue", a giant radioactive chicken. Mercenaries can team up and try to take down the big bad poultry, but the actual objective is to collect "nuggets" scattered around the map. The first mercenary player to get 75 nuggets to the evacuation zone wins. Or alternately, the chicken could destroy all the mercenaries and take the victory.

Another unique feature about the game is its respawn system. When a mercenary dies, they do not come back as the same character they started with. They play as a Lil Dipper, a small alien that can take over the body of any mercenary on the map, provided it can deal enough damage to it.

Many pieces of upcoming content are listed on the Steam page, including new maps and mercenaries. A "Battle Pass" will also be available in-game to reward cosmetics and more through seasonal play.

Game development blog Gamasutra also has an interesting post-mordem of the game with info from lead developer Casey Donnellan.

Vicious Circle is available on Steam now for $19.99. Check out the link below to get the game.