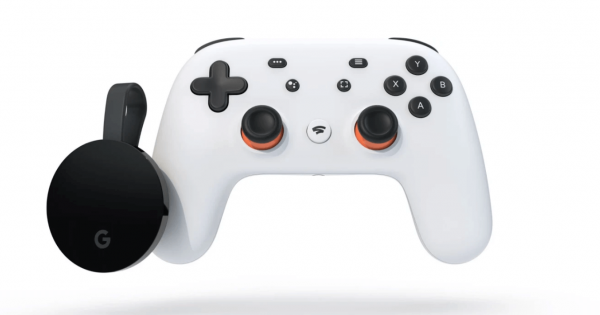 Today is launch day for Google's new game-streaming platform, Stadia, and most of the early access gaming sites are covering the release. To say the least, the responses have been pretty harsh from most.

After all, gamers have never been an accepting group. We just want our games to work perfectly, at 4k resolution 60 FPS, with every button on every controller working exactly as our years of twitch-based finger movements have grown accustomed, but also it needs to completely innovate or we won't know who you're selling it to and why we shouldn't just go pick up an existing PlayStation or Xbox console.

And yet when people keep asking me why I like Stadia, why I'm interested in it, I always respond like they just asked me why I believe the sun is hot, or why I think air is real.

So amidst all the negativity from various gaming websites discussing why they don't get Stadia, let me break down my primary arguments for why it doesn't matter.

There are, at present, 40,000 people on Reddit who follow Stadia, and while the occasional voice crops up with a negative response, for some reason they've been basking in positivity on that subreddit for quite some time now. And overwhelmingly, the voices on the subreddit keep pondering the same thing.

I don't get why people think we don't exist.

The "we" in this category refers to people who find Stadia extremely appealing. And the why isn't what you'd expect. It's not people who have Google products because they think Google is the best. They're not toting around Google Pixel 3s and Chromebooks and just can't wait to get the next hip item from the G-Store. And they're certainly not hardcore gamers.

They're like me. Casual. Many are parents, or married, or working more than one job, or have other various time limitations. They're cord cutters, Netflix watchers, Hulu streamers, who look fondly on those days in college or high school playing video games. They've been priced out of the market for a long time, and it's not for lack of capital, it's because of cost/benefit analysis. Some have dabbled with Steam, but most don't own a PC or Laptop that'll run anything really good. They care about tech, maybe have a brilliant flat screen TV, but that one was a real wrestling match with the budget and the cost benefit.

These are wanderers, sojourners, lost boys and girls who used to play games but no longer do so in any serious capacity. Because when faced with the decision of "Buy a PS4 and Final Fantasy or don't play Final Fantasy" -- they chose the latter.

They don't like gaming culture, they don't need 4k at 60FPS. They just want a low barrier to entry with high tech capacity and the ability to pick up and drop a game -- or shift to another screen -- to deal with their many competing priorities.

In short, gaming has to fit their lives for it to work. Not the other way around.

And this is what Google (and their business model) is counting on.

It's not free - at the moment. But actually, it will be. This is an open beta being released today. Most of the early adopters are people who want to try tech for the sake of tech, or who are in the gaming industry looking to see if it meets the specs - zero latency, 4k 60FPS, and "can my internet connection hack it". They're comparing Stadia to consoles as people who own consoles. They're comparing it to consoles as people willing to buy consoles. And predictably, they're left wondering why anyone would want this when they could have a perfectly good PlayStation or Xbox.

Only... Stadia is free starting 2020, zero subscription required. Premium just gives you game discounts and a free game a month. Founder's Edition was a capital strategy, an attempt to pull in initial investment and create buzz. But it is hands down a large-scale beta.

So long as Stadia survives, game purchases on Stadia survive without need for subscription. The model is far more Audible than it is Netflix. And Audible's working model is exceptionally robust.

The model won't be what stops Stadia from working.

But Streaming Isn't The Future of Gaming -- And the Offerings? 22 Games?

This is another argument I hear relatively often.

We currently have two full-scale test cases in which streaming was the future when no one wanted to believe it would be -- primarily because people either didn't think anyone would take kindly to not owning a physical object, and because the tech wasn't there yet.

People who were early adopters of Netflix didn't expect zero buffering, full surround sound, movie theater experiences. What they wanted was simple. Convenience. Which is all early streaming of videos had to offer. The Hulu model worked for the same reason. Free TV, on a computer, without downloads. Hulu used the model of licensing with some of the major networks and got what it was after. But most people don't remember that Netflix had an extremely hard road into streaming movies and TV shows. They didn't have the licensing like Hulu. Their first business model was physical DVD's. Shifting to making deals with networks was a real stretch. Shifting to convincing movie studios to let them stream movies was a real stretch. Their initial offerings were crap for streaming compared to what physical DVD rental places had, and compared to theaters. And no one cared.

Gaming enthusiasts seem stuck in this idea that's been drilled into them for years. People buy consoles for specific games. Get someone to want a game bad enough, release it exclusively on a console, win-win. But the entire portion of the Venn diagram full of gamers who just quit gaming, or didn't cave to market pressure, seems to be lost on them. They keep thinking the initial games matter because that's the predictive model that gaming has used for the last two decades.

But technology changes strategy. And for many, when given the opportunity to pay 600 for a console with a triple A exclusive title or to not play it, would prefer to just play something else. The something matters less. Again, either gaming fits into their life or it doesn't fit at all. It's not about money. It's about cost/benefit analysis. The cost of buying a gaming system exclusively for games does not outweigh the benefit of playing games. But the cost of a free platform and the price of a single game? These casuals won't buy 10 games in a year. They may not buy 3. And they're not buying a system to play 3 games a year.

So it doesn't need insane offerings. Heck, it doesn't even need to work like a full "gaming experience" with perfect gigabit internet and a perfect rig. It just needs to work within a degree of reasonability, and it just needs to improve over time.

In June, when Stadia was announced with a launch date of November, Sony partnered with Microsoft for the first time since the two were competitors. You don't do that when you aren't taking another company seriously as a threat.

The announcement came so suddenly that even the partnering Sony and Microsoft teams were surprised. And while any stalwart platform producer will toe the company line of "streaming isn't the future" until they have a comparable solution (like xCloud) -- and then they'll tell you why their solution is better than sliced bread -- the market moves and business decisions show quite clearly that they are both concerned for the future of platform gaming. At least enough so to partner with their largest competition for the last two decades in hopes that both don't become about as relevant as dinosaurs.

And while first to market isn't always the chief indicator of success in business -- often it can create a footrace that can't be won.

So in short, if Stadia succeeds, it'll be because a lot of people like me exist. People who play less than 10 games a year (and most, closer to the 3 range), and people who need a game system to fit into their lives, not the other way around. We don't need 4k at 60FPS. We don't need perfect response time or controllers set up in a way that maps well to our years of gaming experience. We haven't touched a console in years - maybe even the last 2-3 generations.

We need a convenient service that works with our lives. And that's why Stadia (or a similar service) will eventually win out.