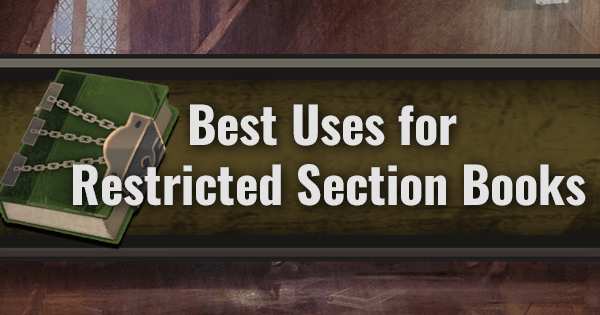 With Harry Potter Wizards Unite’s first event, Brilliant Event: Fantastic Flora and Fauna, but a few days away, non-beta players will finally have access to the coveted Restricted Section Books. Given how exclusive these books are and how important they are for Skill Tree progression, it is important to know which skills are the best to invest in. This guide details the best skills for your buck and the rationale behind them.

If you’re curious about the event itself, you can check out the Brilliant Event: Fantastic Flora and Fauna Guide.

Auror has the advantage of being the most powerful and straightforward Profession without any real need for Restricted Section Books. When it comes to your first 15 Restricted Section Books you have two options: increasing your Power through Dancing with Dummies or going for more Team Support by improving your Weakness and Confusion Hexes. If you can’t decide, let the numbers below chose for you.

In general, Precision (Crit Chance) and Critical Power scale poorly compared to straight Power gains. However, in the case of Dancing with Dummies (+35 Precision when foe is at 100% Stamina), you get enough Precision to make it worthwhile. Taking Dancing with Dummies makes First Strike (+50% Critical Power when foe is at 100% Stamina) even more worthwhile since you get that heavy, initial Precision gain to potentiate it. The table below spells out the general “Power” you can expect to gain from these skills.

Note: At the time of writing this article, Dancing with Dummies bugged. You will still get the +35% Precision, however it comes in after the enemies first attack, regardless of their hit points. Thank you u/hsun94 for figuring this out!

If you play with allies often and like to grind harder Fortress content, then advancing your Weakness and Confusion Hexes pays off pretty quickly. By grabbing the Improved Weakness Hex, not only will you be able to better protect yourself and allies, but you’ll gain access to +1 Starting Focus. This grants you an additional Focus to either debuff an extra opponent with or to send to your teams Professor to fuel their Charm and Hex usage.

In the early game the Magizoologist makes up for its lack of Power with its ubiquitous healing and revival skills. However, once this Profession gains access to Become the Beast (+40 Power when at +5 Focus), it transforms into an almighty brawler that also has ubiquitous healing and revival skills. Unfortunately, this amazing skill is gated behind 19 Restricted Section Books. As a result, your first 4 books need to go to Luna’s Stamina Charm to set up for it.

Given that Restricted Section Books are assumed to come in waves of 15, you may as well pick up 2 additional Skills while you wait. Picking up the Stamina Charm Maxima will open up an additional Starting Focus skill, which is important for maintaining +5 Focus for Become the Beast. The Improved Revive Charm will further boost your most important Team Play skill. The Improved Bravery Charm may also be considered if you find yourself up against Elite Foes often (+30% to Power is insanely good).

The Auror is the most powerful Profession in Wizards Unite, until of course you count in the Professor’s Deterioration Hex. Even with the recent 50% nerf to damage, the Deterioration Hex is arguably the most powerful skill in the game (second only to the Magizoologist’s Revive). Dealing an effective +10 damage per action stacks quickly enough over time. Doubling and later quadrupling this damage is even cooler.

The only other skill that competes with the Deterioration Hex is the skill Confidence. The skill itself isn’t all that impressive (+6% to defense is a joke for 15 Restricted Section Books), but the +2 Initial Focus it gates is. The boost it gives to your Charm and Hex frequency is quite appealing, but is ideally saved for after you have maxed out your Hex’s damage. However, if you solo play frequently and feel automatically accessing your Protection Charm at the start of a Fortress battle is worth passing up the Hex damage, Confidence could be a solid starting pick.

While of course experimenting with builds and skills is part of the fun in any game, Wizards Unite's lack of any Skill Tree redistribution makes it a moderately tiresome process to do so. The builds laid out above are by no means a do-or-die command, but merely a good starting point for anyone to play out their Profession with confidence until and unless they decide to make their own alterations. Now that you know, go ahead, get those Restricted Section Books, and get to Spell-slinging!

Have any questions or need clarification? Head on over to our Community and ask away, or just join in general discussion!