Day of the Dragons Guide 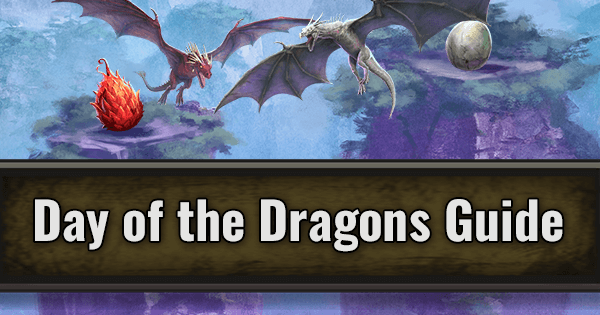 Dragons are coming to Wizards Unite! While attendees at the Wizards Unite Fan Festival (WUFF) already had their first encounters with Dragons, the rest of the world will encounter them for the first time on Saturday, September 7.

At WUFF, attendees were able to unlock a special Day of the Dragons worldwide event. Read on for details about this event, including which dragon to expect in your region.

Day of the Dragons is a three-hour special event featuring, well, Dragons. The times for the event are as follows:

The four new Dragons in Wizards Unite are region-locked Oddities, so each region will typically only have access to one Dragon. During Day of the Dragons, however, each region will be visited by a Dragon not native to that region.

Here are all the regions, which Dragon is native there, and which Dragon will be visiting on Day of the Dragons:

The visiting Dragon was decided over the weekend based on “votes” from players picking up and unlocking special Dragon Egg Portkeys corresponding with the four different species, as part of the WUFF Global Challenge.

Update September 5: It has now been confirmed that players will be able to encounter both their native dragon and the visiting dragon during the event hours.

During the 3-hour event, players will be able to claim a free store pack containing the following:

Even if you won't be able to play during the event, be sure to log in and claim the free gift, especially for players who are stuck needing Spell Books in order to continue progressing on their Profession Skill Tree.

The Wizards Unite team has also said that Foundables for the new Hogwarts School page, Moving Staircases II, will begin appearing on Day of the Dragons. These should continue to appear after the event.

Preparing for Day of the Dragons

There may be more details about the event coming later, but based on the current information so far, here are some basic tips to prepare:

Scout out your play area

Given the current bonuses, the single best way to maximise your rewards from Day of the Dragons is to just find the best play area available to you. Look for an area with frequent spawns and several Inns.

Several players have reported issues with landmarked areas blocking event spawns and Oddities spawns. While some of these issues seem to have been fixed now, if your best location is in, say, a park or other landmarked area, be sure to come up with a nearby back-up plan in case no Dragons are spawning there during the event.

While there aren’t many obvious perks to playing with a group on Day of the Dragons, events are one of the easiest times to find other players for times that there are perks for playing with others. If you’re still looking for a group, try checking out the official community map.

Since players will already be out, consider seeing who might be up for doing a few Fortress runs after the event finishes. Group Fortress runs are a great way to earn Challenge XP and red books, as well as Fortress-exclusive fragments and Wizarding XP.

If the Tonic for Trace Detection (found in game files but not yet available in-game) is released before Day of the Dragons, players will likely want to bring up to 6 of them.

This potion will function like a Dark Detector, except the Traces will only be visible for one player and appear by the player wherever they are, not just by an Inn.

Witches and wizards interested in Wizarding XP will also want to bring up to 6 Baruffio’s Brain Elixirs to maximise the bonus WXP available during the event.

Gold burning a hole in your pocket? Here are the best places to spend that gold for this event:

First and foremost, players should be sure to have enough Spell Energy, as Dragons will take 2-7 Spell Energy each without a Critical Hit, depending on your Power and which Dragon you’re facing. (Critical Hits will allow some players to defeat them in only one hit.)

If your best spawn area is low on Inns, you might consider investing in increased energy capacity before the event. This will help you start the event stocked up with more energy and avoid running out and needing to buy more during the event.

For this event, players may also wish to use some Dark Detectors. While some players have reported that Dark Detectors do not spawn Oddities, they will still provide more spawns and can attract some rarer Traces. This is an especially good option if your play area is high on Inns (to keep up with the increased Spell Energy needs), and you have a community with whom to share the rewards.

Update: the Wizards Unite team has now confirmed that Dragons may appear with Dark Detectors.

For players on a budget, we do not recommend spending any gold on premium items for this event. Players should be able to take advantage of the event pretty easily without spending any gold.

For those looking to complete their registry, Day of the Dragons will not provide a whole lot of progress. Depending on the availability of native dragons before and during the event (and on whether they collected enough Dragon Eggs during the Global Challenge), players in Asia, the Middle East and India and Oceania regions may be able to prestige Oddities III to bronze and place the stickers for the Chinese Fireball and Antipodean Opaleye again.

However, there is no indication if, when, or how Dragon Eggs might be released again, so it is unlikely that players will be able to prestige any further.

Overall, Day of the Dragons is (so far) a pretty straight forward event that won’t require much preparation to maximise benefit. Just show up, battle some Dragons, and have fun!

Of course, if and when more details are revealed for this event, the recommendations in this guide may change. Be sure to check back before the event in case anything has changed!