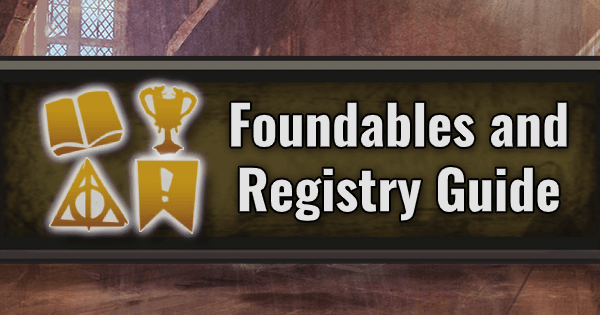 The Registry is a magical book that documents your progress in the game. Every Fragment you find and return is documented here as a record of your efforts. For many players, completing the Registry is one of the main goals in Wizards Unite.

Of course, completing the Registry is no easy task. To help you make sense of this vast tome and find all of the Fragments you need to fill in your Registry, we’ve put together this guide.

These Sections are then split into Families, shown in icons at the top in each section, and finally split into Pages, viewed by scrolling down within each Family. 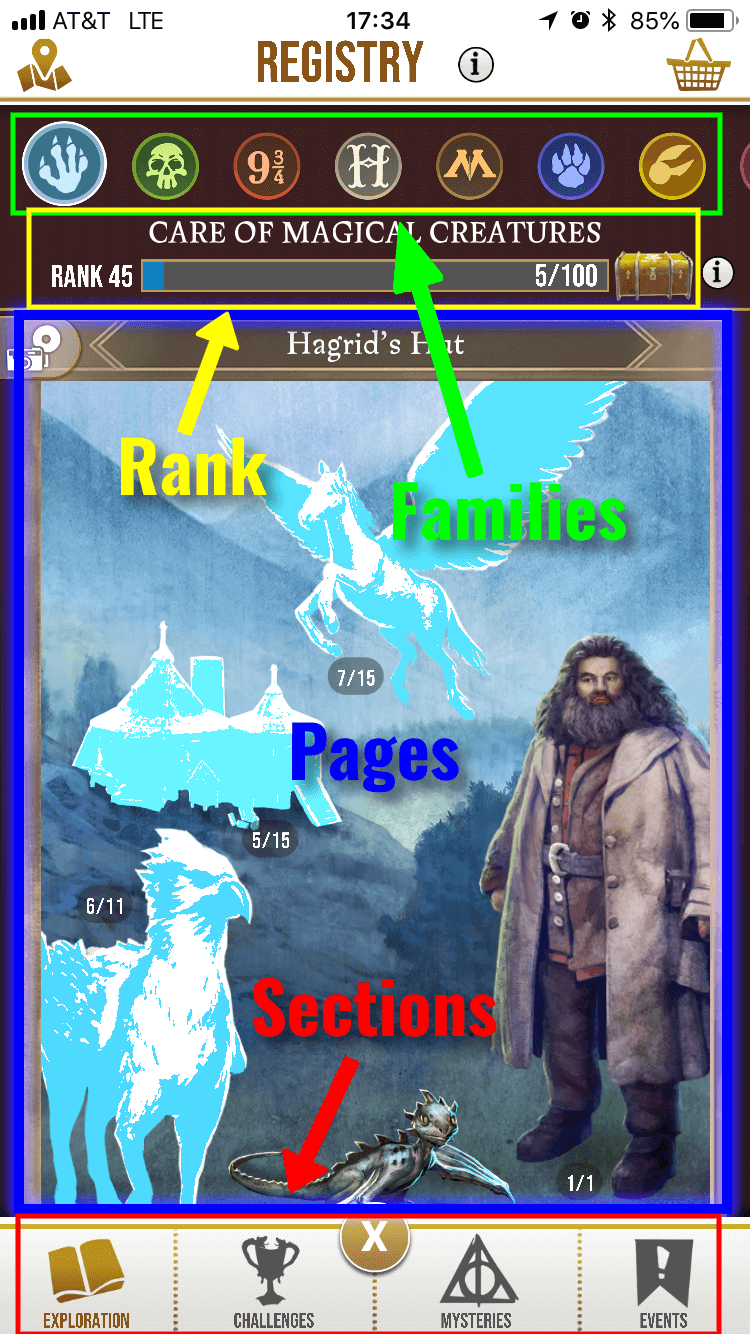 Most Sections or Families have an additional Rank mechanic, where players earn Treasure Trunks containing bonus rewards by collecting Rank Points (also know as Family XP, or FXP) for that Section or Family.

As you complete Trace Encounters, complete Wizarding Challenges in Fortresses, unlock Portkeys, and complete certain Special Assignments, you will collect Fragments and Rank Points. Once you collect all Fragments of a Foundable, you will be able to place the image for that Foundable in your Registry.

When you place all Foundables on a Page, you’ll be able to Prestige the Page, getting a new frame (vanilla, bronze, silver, gold) and the chance to fill in the page once more. 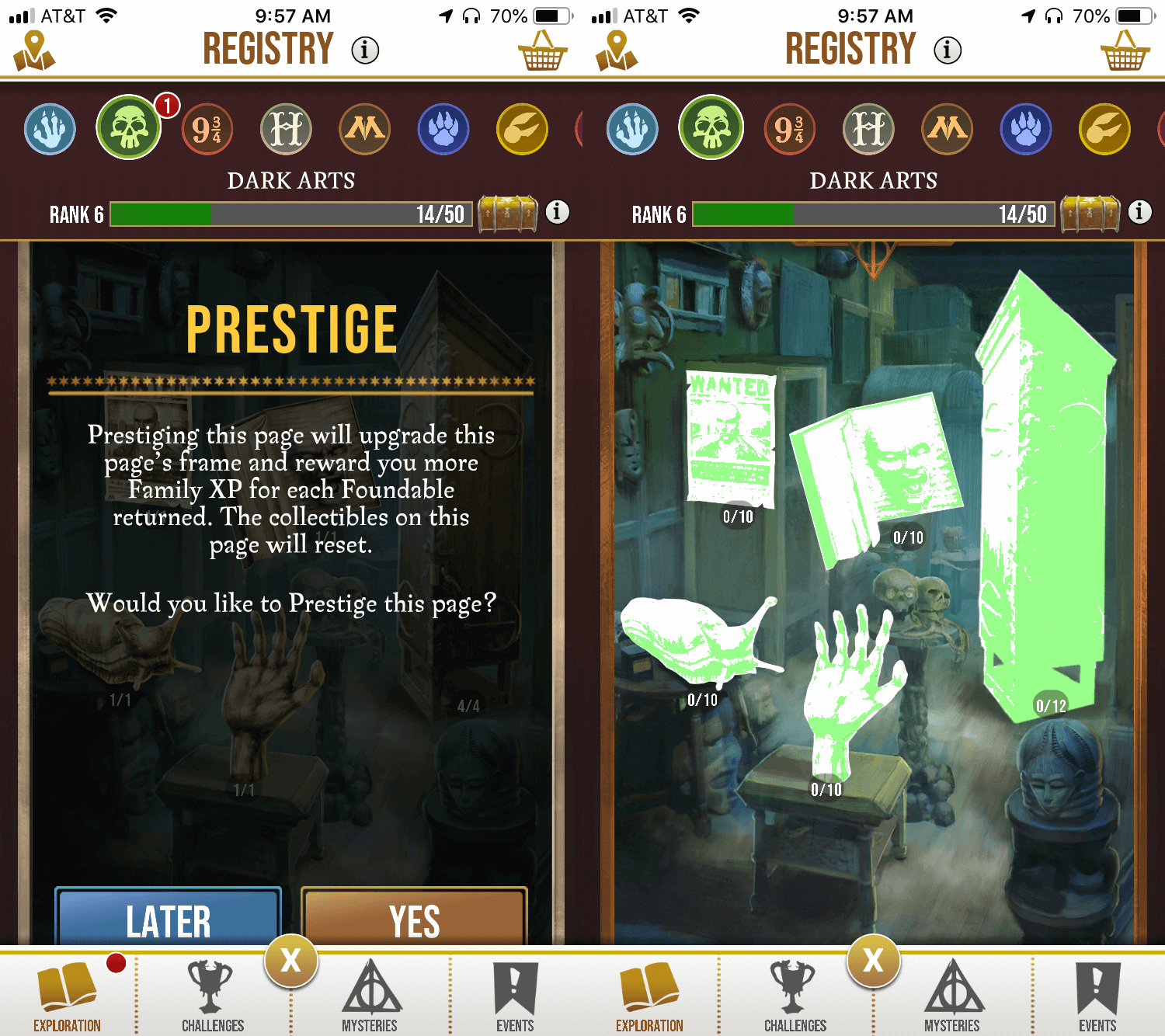 Each time you Prestige a Page, you’ll need to collect even more Fragments of each Foundable than you did the previous time.

While it can feel disheartening to see all your hard work disappear when you prestige, there is an end in sight! With enough time and effort, you’ll eventually have a completed gold Registry Page and finally get to spend more time with your remaining limbs. (Oh, wait, that was Professor Kettleburn, wasn’t it?) 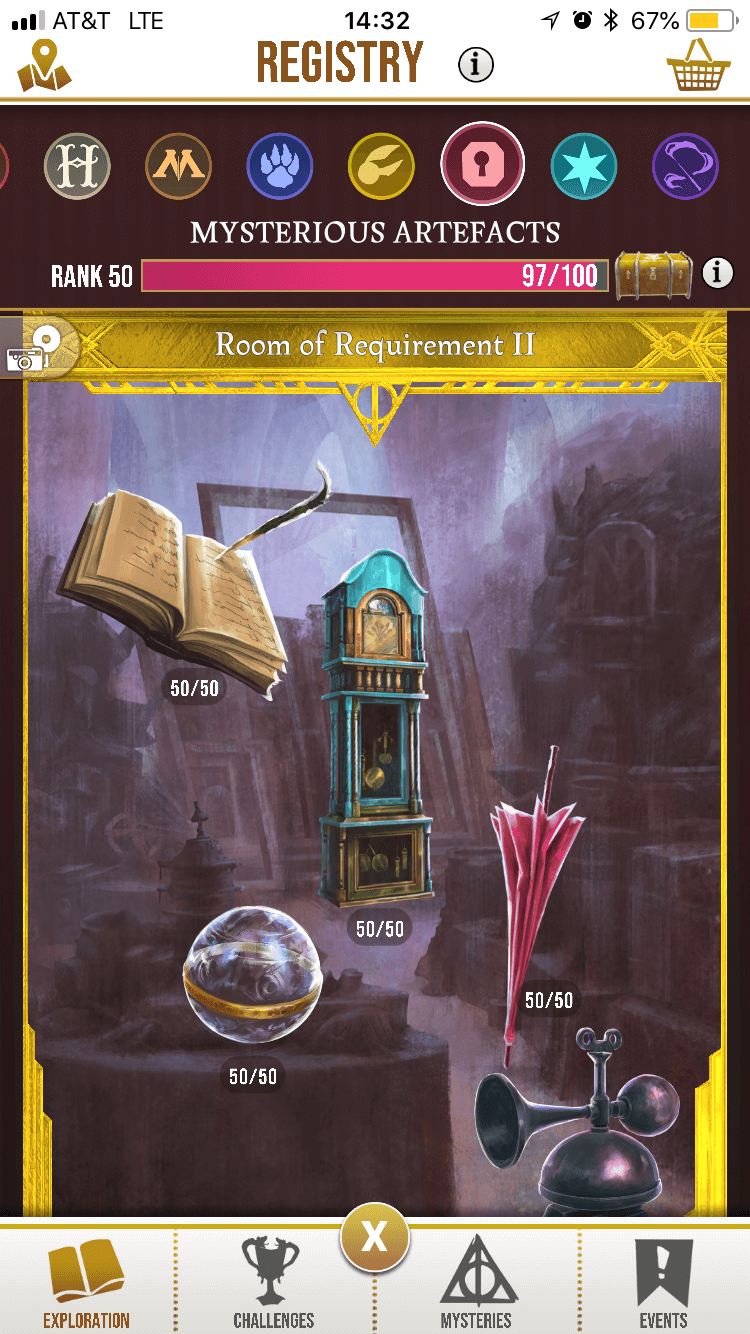 With the basics out of the way, let’s take a closer look at the four Sections of the Registry, shall we?

Each Family in Exploration has its own rank. Earn Family XP by collecting Fragments of that Family, and when you rank up, you’ll receive Scrolls and a Runestone matching that family.

The points needed for each Rank in Exploration caps at 100 points. Rank for all ten families caps at Rank 65. After this, players can continue to earn Rank up rewards (bonus Ranks), but their Rank will say “Rank 65*”.

The majority of these Foundables are available in Trace Encounters. They will show up on the map with the icon of the Family they belong to, as well as a beam if they are High (yellow), Severe (orange), or Emergency (red) threats.

Fragments of certain Exploration Foundables can also be found as rewards for completing Wizarding Challenges in Fortresses. These are not guaranteed, but, if awarded, will correspond to the Runestone used to enter the Chamber.

In other words, if you’re trying to collect Fragments of, say, Abraxan Winged Horse, use your Care of Magical Creatures Runestones on the toughest Fortresses you can handle and hope luck is on your side! 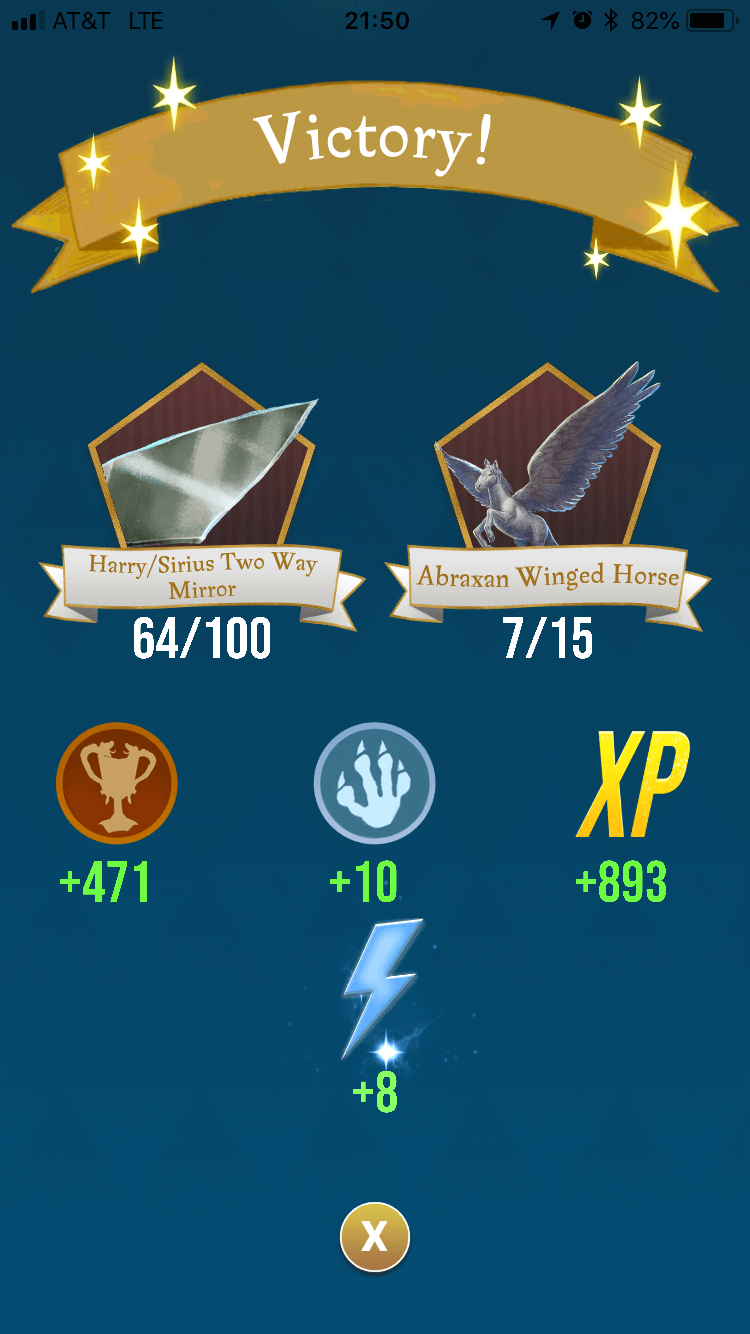 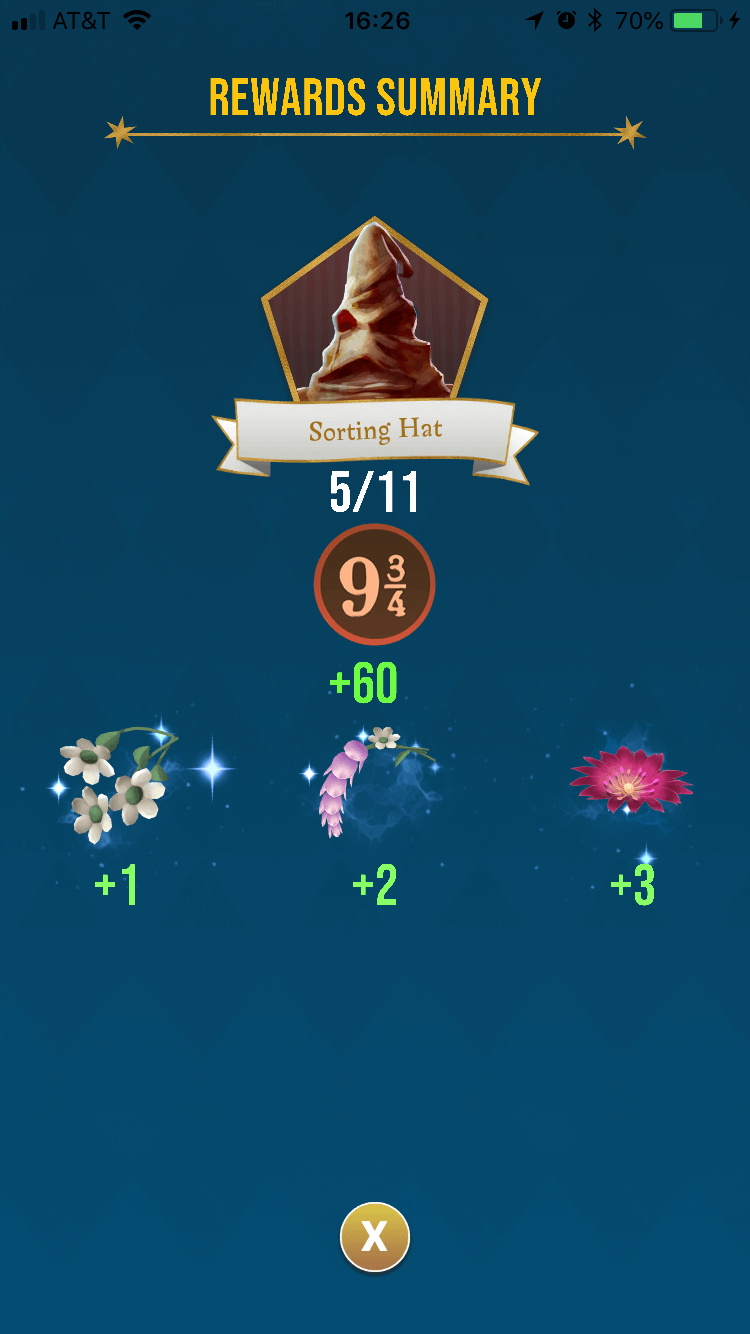 Before we leave the Exploration Section, we need to look at the, ahem, oddball Family in Exploration: Oddities.

Trace Encounters for Oddities, far more so than any other Exploration Family, are heavily dependent on time of day, climate, weather, and/or moon phase.

Werewolves, for example, are found almost exclusively at Night around full moon (typically 4-5 days centered around full moon). Check out the pages for each of those Foundables for tips on when and where they are typically found.

The Oddities family also contains the first and (so far) only region-exclusive Foundables: Dragons. Learn more about the Dragon pages here.

Finally, most importantly, Oddities found on the Map will attack you. This is the same combat system as in Fortresses with one key difference: Proficiency Power is not applied against Oddities. 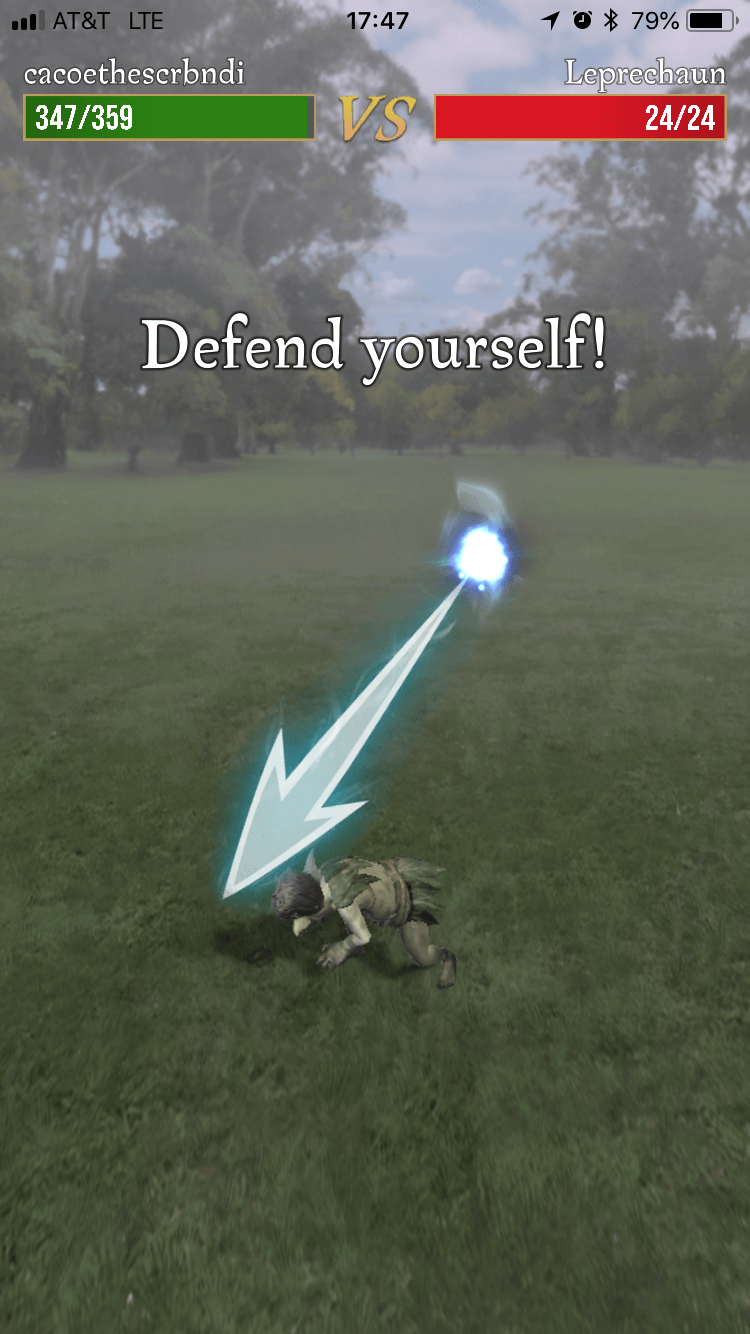 In Challenges, there are currently seven Families, two of which are for unreleased gameplay (called Adversaries), so they cannot be completed yet. Unlike Exploration, these families all share one rank, which is increased by Challenge XP (CXP). Ranking up here earns players Spell Books.

Challenge Ranks also are not capped at 100 CXP. Rather, the CXP needed to rank up increases with every Rank until max Rank, Rank 150, which requires 3770 CXP.

After this Rank, players can still rank up, but their Rank will say “Rank 150*”. No additional bonuses for reaching maximum Challenge Rank are currently available. 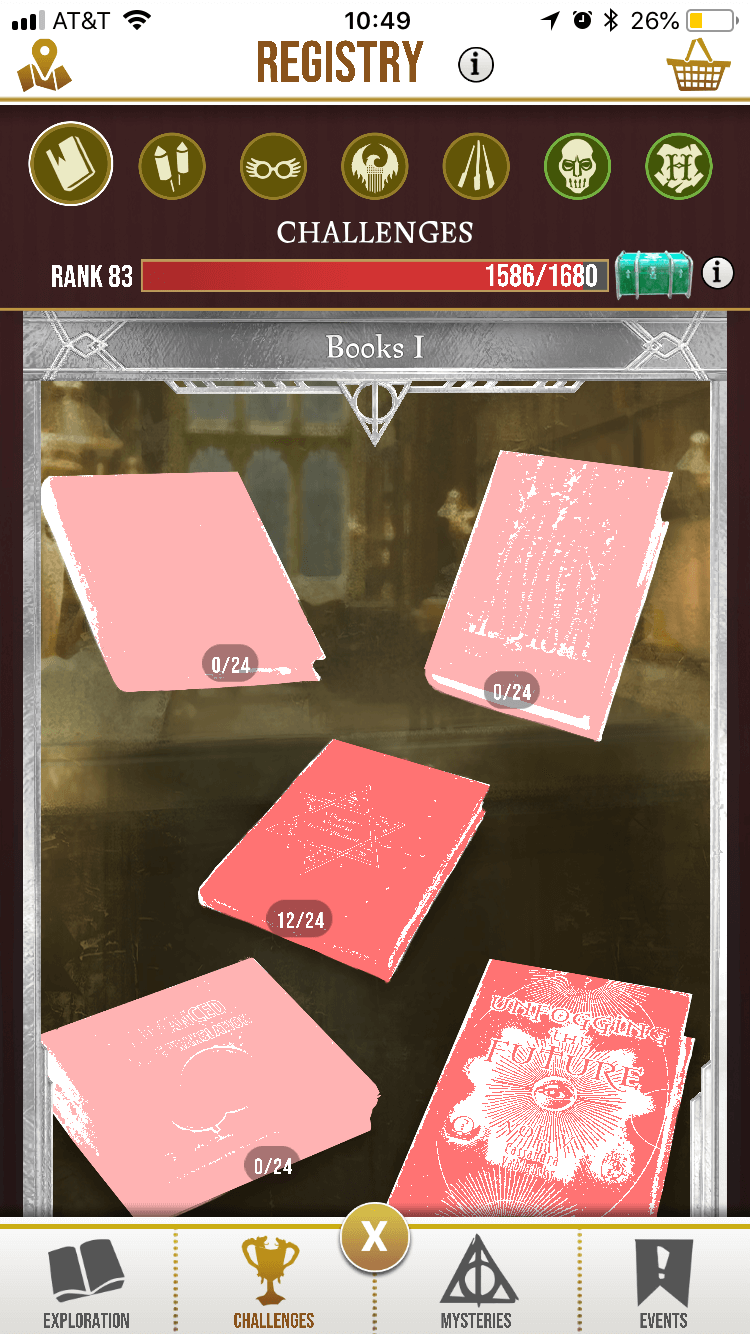 These Foundables and Challenge XP are typically found as rewards for completing Wizarding Challenges in Fortresses. They can also be found in Portkeys at times.

Each Family, Page, and even Foundable in Challenges roughly corresponds with certain Fortress Chambers. Very, very roughly, Books are typically found in Ruins Chambers, Joke Products in Tower, Symbols of the Wizarding World in Forest, and Magical Devices and Wands in Dark.

Of course, this is not exact, but the community has not yet gathered enough data to precisely say which Challenge Fragments drop from which Chambers at which rate. In any case, use it as a rough guide to help you find the ones you’re looking for.

However, the difference is not hugely significant in the long run, amounting to only about 20,000 CXP, which is roughly 4-7% of the CXP needed to complete a single Profession Skill Tree.

Keep in mind, too, that that value is based on Prestiging all 13 current Challenge Pages to gold, which most players won’t manage before collecting enough books to complete a Skill Tree anyway. Prestiging all three Books Pages to gold, for example, only earns 160 CXP less than not prestiging would.

Also, it is possible that rewards will be added for having gold pages in the future, or the CXP mechanics may be adjusted to make Prestiging Challenges Pages into more of a win-win situation like Exploration Pages currently are.

Either way, how you choose to play is up to you, so feel free Prestige if you want to work on completing the pages, or skip Prestiging if the CXP is more important to you.

So what about those last two Families with the posters of Death Eaters and other antagonists? These are not currently findable in the game. 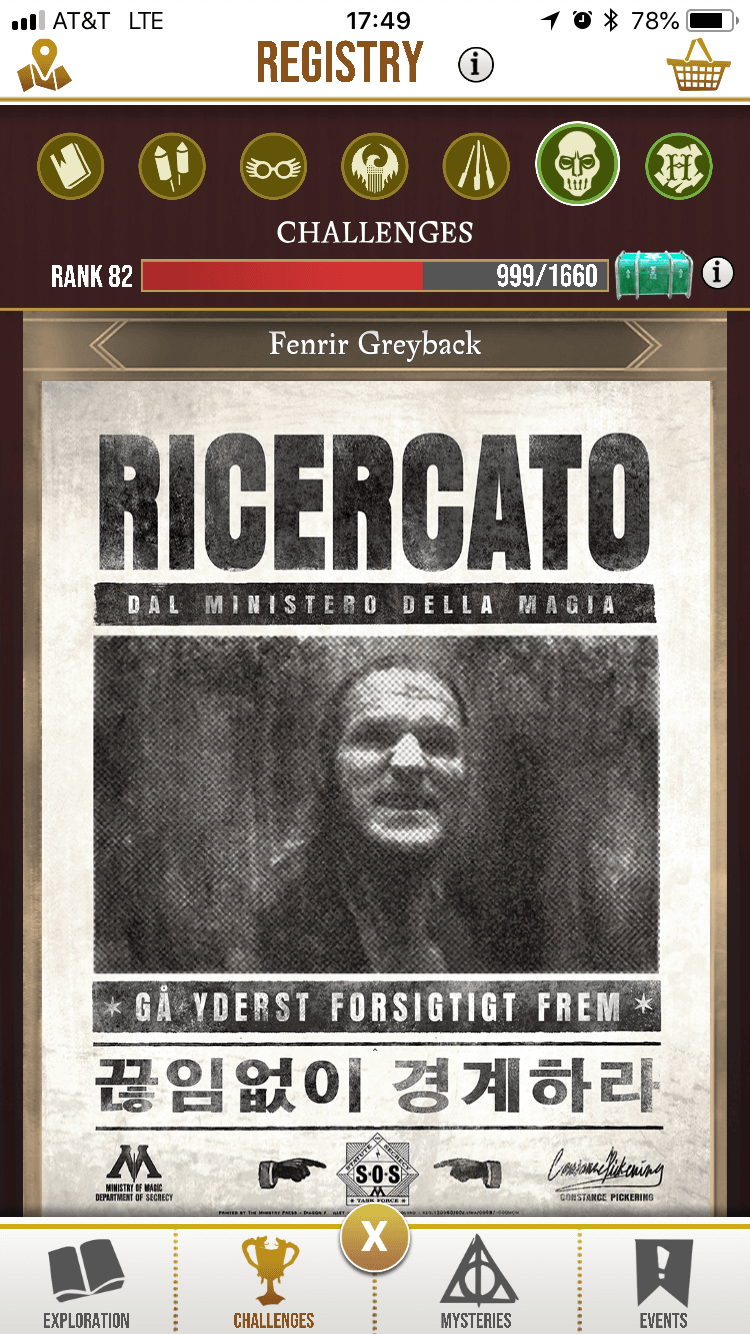 Based on what information is available, it seems that these are likely intended as part of an unreleased type of gameplay and may be limited to special events. Additional Adversaries Families and Pages have also been found in the code.

Next up, the Mysteries Section contains clues and details about the game’s overall story. There are currently three Chapters with more to come eventually. The Foundables on these pages are collected as random drops from Trace Encounters.

Placing these images will bring up a bit of dialog from characters in the game. If you missed what they said or just want to go back and reread, you can do so at any of the pages in Story Lore.

Finally, the Events section contains Foundables that appear only in, well, events. These are very similar to Exploration, though the Foundables for each page are typically only available for a week at a time.

To collect these Foundables, players will need to complete Trace Encounters (helpfully marked with a purple beam), unlock special event Portkeys, complete Wizarding Challenges using the corresponding event Runestones, and complete Special Assignments—all within the span of the event.

Ranks for Events work similarly to Exploration Ranks. Each Family has its own Rank, which maxes out at Rank 65*, where players can continue to earn Rewards.

Event Treasure Trunks, however, contain more scrolls, and Event Runestones so far are only available as level 1s.

In addition, the max Family XP needed to rank up was reduced to 40, rather than 100, with the Back to Hogwarts Brilliant Event. It is unknown at time of writing whether this will hold true for future Event Families too.

Be sure to look out for guides for each event to help you find all the Fragments you need to complete these pages!

More pages are added to the Registry regularly, so be sure to check your Registry often for new Pages. (Or just check back here on GamePress—we’ll be sure to keep you updated with any new releases.)