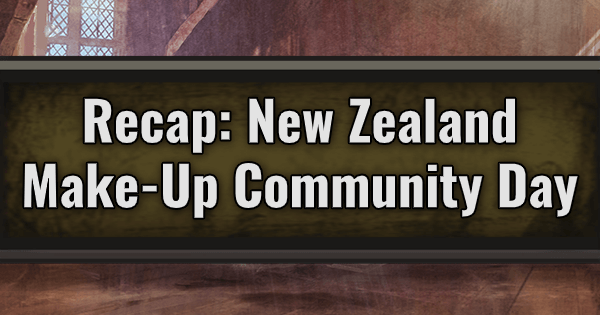 Last weekend, Community Day failed to start on time. Players in UTC+13 and UTC+12 timezones (New Zealand and other parts of Asia-Pacific) were unable to participate in most of October Community Day dues to the issue. None of the promised bonuses, including the Oddities family spawns, appeared during the first two hours of the event.

After fixing the issues for later timezones, @NianticHelp assured players that there would be a make-up Community Day for players in these timezones:

We are rescheduling #WizardsUnite Community Day for regions UTC+13 and UTC+12. We will announce the make-up October Community Day soon, please stay tuned. We apologize for the inconvenience.
All other regions (including UTC+11) will have Community Day at the scheduled time. https://t.co/WnQhDlGR2m

Niantic announced the new date and time about 48 hours before the make-up event:

Players in the UTC+13 and UTC+12 time zones will have a make up #WizardsUnite Community Day on Saturday, October 26th. Head to the Community for more details on this event: https://t.co/fqvNnTYtRy https://t.co/WnQhDlGR2m

Players specifically requested that the make-up come before the Harrowing Halloween event in order to collect Dark Arts Runestones to use for Halloween.

The makeup Community Day happened as scheduled and players did not report many issues. The only reported issue players found was that the spawn pool for Tonics for Trace Detection was not initially switched to match Community Day spawns.

Instead of the promised Doxies, Vampires and Werewolves, players were continuing to see the featured spawns from the Fighting Forces Brilliant Event. Fazes from the Wizards Unite team reported the issue as fixed roughly an hour and 45 minutes into the event.

Hopefully, witches and wizards in the affected timezones were able to return all the Oddities they wanted and stock up plenty of Dark Arts Runestones for the upcoming Halloween Event!