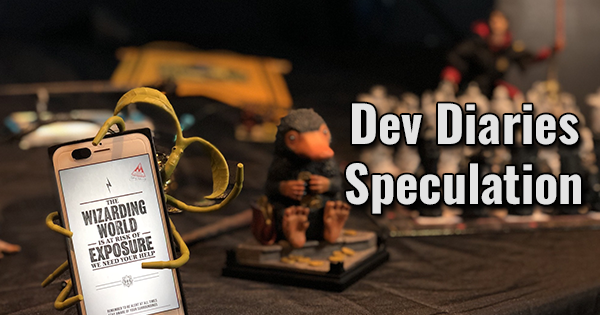 The Harry Potter: Wizards Unite team published the first “Dev Diaries” yesterday, which features perspectives from some of the developers and others who have helped make the game. Niantic has sometimes posted “Developer Insights” for major features or changes to Pokémon GO, such as Adventure Sync, so we might see these “Dev Diaries” become a regular occurrence alongside new features in Wizards Unite.

This Dev Diaries post touches on three key goals or themes that have driven the development of the game: creating an immersive world, opportunities for collaborative gameplay, and an emphasis on lore and story.

They want players to be able to go to the wizarding world and solve mysteries with their friends, just like Harry, Ron, and Hermione. While there is not a lot of concrete information in the post beyond what’s already been seen in beta, like Hermione once said, “there [is] some important stuff hidden in the waffle.” Let’s dive into that waffle, shall we?

The Future of Wizards Unite?

All four of the featured team members mention wanting Wizards Unite to create experiences for players to feel fully immersed in the wizarding world. They want the game’s world to feel like something “you can reach out and touch.” Amidst the article’s many mentions of immersion and AR innovation, they say the game is “surpassing the previous limitations of AR tech in mobile gaming” and that “Portkeys will offer an AR experience like no other game has featured before.”

Those are some big claims for a game that currently (in beta) does not include much more AR than Pokémon GO and Snapchat, so this is hopefully an indication that there are a lot more innovative and engaging AR features in the works for Wizards Unite.

What might these new AR functions look like? Niantic has already developed some prototype examples as part of the Niantic Real World Platform, which we’ll go through one by one here.

First off, Codename: Neon (see video below) is perhaps the most well-known amongst those speculating about Wizards Unite. It showcases a sort of AR laser tag, which many have speculated could be used for an AR dueling feature in Wizards Unite. While this is certainly a possible application, with so much focus on collaboration and cooperative gameplay (we’re here to *unite*, after all, not fight each other), AR dueling other players is probably not something we can expect in the near future for Wizards Unite.

If something like this was implemented, it seems more likely to be for fighting NPCs alongside other players, rather than against them.

On the subject of collaborative multiplayer AR experiences though, Niantic also has Codename: Tonehenge. Niantic’s demo has players working together to interact with and solve a puzzle.

“Solving the mystery will not be a solo effort,” the developers claim, so might we see some kind of collaborative AR puzzles come to Wizards Unite in the future? While Fortress Challenges are currently all battles, the naming could imply that this will eventually feature other types of challenges, such as the Trio’s journey to the Philosopher’s Stone through a series of various puzzles and challenges. Find a large, open space, and maybe you and your friends will finally get to play a life-sized game of wizard’s chess!

Of course, we might also see existing AR experiences refined and improved to more seamlessly blend our world and the wizarding world. Niantic’s Codename: Occlusion is a good example of what they might be working on to do just that. “Occlusion” in the context of AR is about getting AR objects to hide behind real objects. In other words, if you open up an AR view of a niffler, it should be able to run behind your couch and reappear when it runs out, just like if there really was a niffler running around your living room. If you’ve used Pokémon GO’s AR camera feature, you’ve probably seen how it looks without occlusion. AR occlusion still has a long way to go, but if Niantic’s Codename: Occlusion is any indication, they’re certainly working on it, and we might see the results of that work in Wizards Unite.

Finally, while AR and immersion were huge points in the post, there may be more features to come to Wizards Unite that don’t involve AR at all. There are likely more social features on the horizon for Wizards Unite, such as a friendship feature, social media integration, or other ways to easily share your progress and achievements with your friends in the app.

The post also explicitly states that the game will have a *multi-year* narrative and that players will need to work together to solve the mysteries in the storyline. Live, in-person events in Niantic’s first game, Ingress, have often been integral to that game’s storyline, so might we see live Wizards Unite events where witches and wizards must come together to solve puzzles and fight off dark forces in order to advance the global story?

With all of the featured developers touting their Harry Potter cred, hopefully we can expect these events will draw deeply on existing lore and truly feel like stepping into the wizarding world and living out the stories we’ve spent years reading, watching, and imagining ourselves within.

What else do you think we might see come to Wizards Unite? What features are you most excited to see? Share your thoughts in our Community Forums!