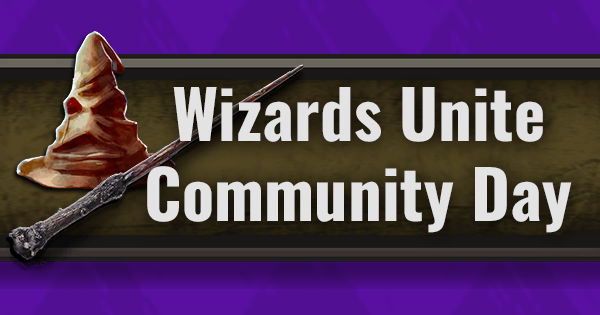 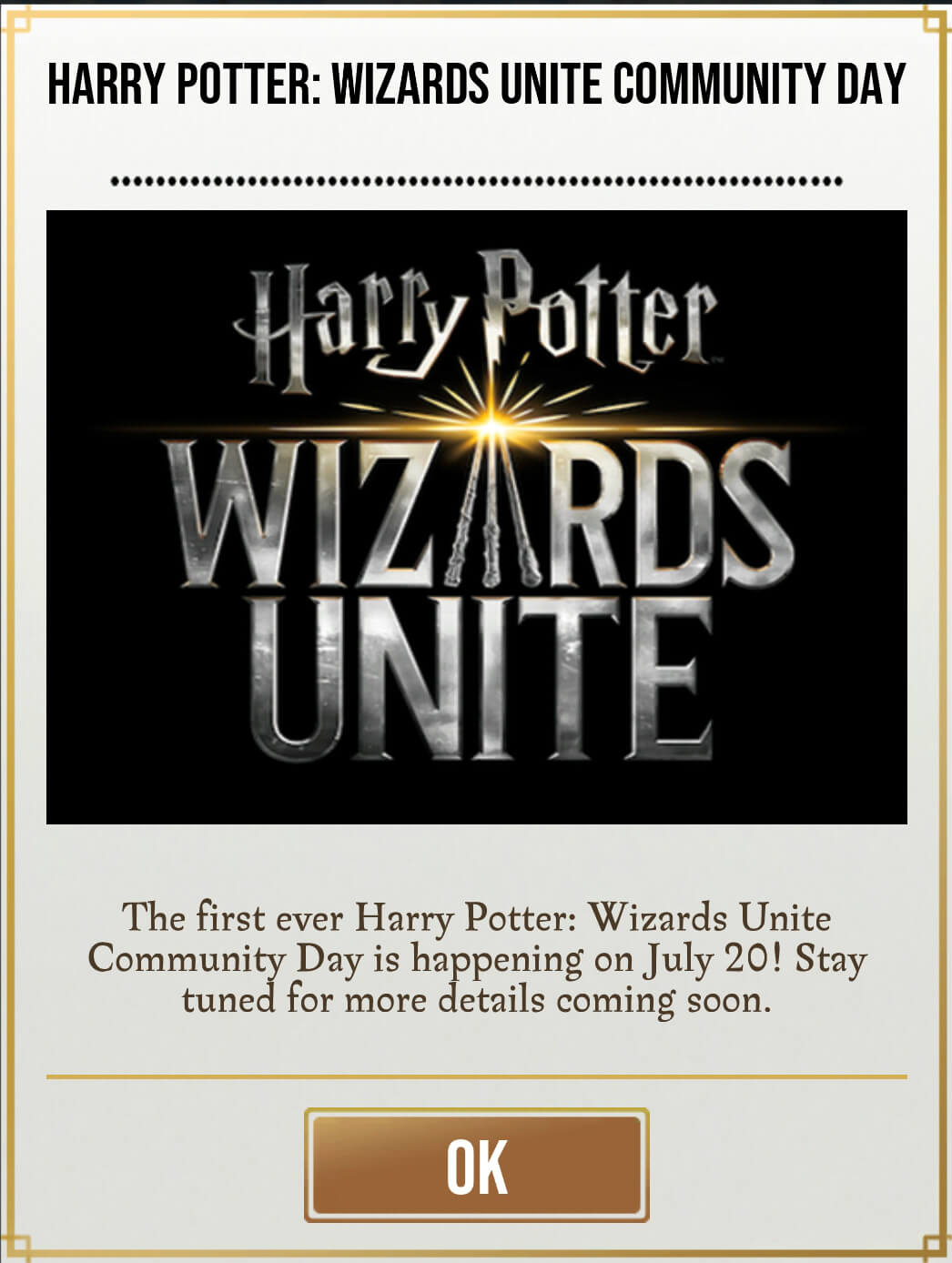 A later announcement to the official Wizards Unite community has confirmed the exact start and end times for July Community Day:

While not much else has been confirmed about what exactly this event will entail, we have some initial speculation and tips for players. We’ll keep you updated with the latest about Community Day as more information is released.

There will be a free store pack with:

The bonuses for the 3-hour event will be:

What is Community Day?

Not much is known yet about what, specifically, a Wizards Unite Community Day is all about, but we can make some educated speculation based on past events in Wizards Unite as well as similar events in Niantic’s other games, Pokémon GO and Ingress.

Equivalents in other Niantic Games

Both Pokémon GO and Ingress have monthly community events. In Ingress, they’re called First Saturdays, and in Pokémon GO, they’re called, get this, Community Days. Both of these events are short (typically 3 hours), monthly, globally available events with some in-game bonuses.

In Ingress, events are officially organised by local players in cities and neighbourhoods worldwide in coordination with Niantic. Players receive an in-game badge, bonus AP (the game’s equivalent of XP), and any additional prizes provided by the local community. There are three hours of “play time” followed by hanging out and getting to know other players after.

In Pokémon GO, Niantic activates bonuses for 3 hours globally, and local communities plan and organise unofficial meetups around the official event hours. Community Days in Pokémon GO all feature one specific Pokémon plus additional bonuses. Here are all of the bonuses players get in Pokémon GO Community Days:

There is also one rotating bonus, which varies from month to month, but is typically one of the following:

So far in Wizards Unite, there have been two events: the SOS Emergency Event and the Brilliant Flora and Fauna event, which ran once during beta and again since global release.

The SOS Emergency Event lasted 3 hours, provided increased spawns of Care of Magical Creatures traces and increased spell energy, and offered bonus family XP for Care of Magical Creatures. Players of Pokémon GO compared it to that game’s Community Days, and it seems reasonable to guess that it may have been a sort of test event for Niantic and WB Games to prepare for the first Wizards Unite Community Day.

The Brilliant Flora and Fauna event lasted a full week and introduced limited-time special assignments, new portkeys and runestones, and a new registry page with six event-exclusive Foundables. It offered players their first chance at collecting the Restricted Section Books necessary for unlocking certain paths of the skill tree.

However, this event actually featured fewer unique Foundables than the SOS Emergency had, only two of which appeared as Traces on the map. Ranking up the special event registry provided five scrolls per level, but otherwise, there were no other bonuses introduced in the event.

Community Day in Wizards Unite may end up looking very similar to the SOS Emergency Event, with perhaps additional bonuses, such as 3-hour Dark Detectors. Based on the registry mechanics of Wizards Unite, it seems unlikely that players will see only one Foundable featured during Community Day like Pokémon GO’s Community Days.

While an entire registry family, as happened for the SOS Emergency event, may work, players could also see only specific families featured, or new Community Day-exclusive registry pages could be released featuring new Foundables.

In general though, it is pretty safe to assume that Community Day in Wizards Unite will feature a specific Foundable or registry family appearing more frequently for 3 hours, along with some kind of additional bonuses.

Those additional bonuses will hopefully be announced before the event. Based on past events in both Wizards Unite and other Niantic games, these bonus could be any one or more of the following:

So how does a witch or wizard best prepare for Community Day? Here are a few key tips.

Traces will most likely be a core element of gameplay during Community Day, so you’ll want to stock up on:

If you’re trying to level up quickly, you’ll also want 6 Baruffio’s Brain Elixirs ready to go so you can earn double XP for all the Traces you’ll be completing.

Since the event is three hours, you’ll likely want some place where you can stop to rest as needed. Check your local weather forecast—if the weather is unpleasant, you might want to look for somewhere indoors.

Depending on where you’re playing and what the weather is like, you might also want to bring water, snacks, sunscreen, or an umbrella.

It’s not called Community Day for nothing! This is a great chance to try to find local players in your area or take a day trip somewhere else to meet new players and connect with the Wizards Unite community.

While the community is still new, many local groups have already started to form. The easiest way to look for a community near you is to simply search “wizards unite [your location]” into Google, Facebook, or other social media sites. You can also try searching for Pokémon GO communities, as many of them have started Wizards Unite groups. A few sites have also started maps of communities, which might help you find a group near you, such as Wizard Unite World’s Discord map, and Wizards GO App’s local community database.

While we may not know the exact bonuses for Community Day yet, hopefully this has helped you prepare for what might be in store on July 20th! As more information is released, we’ll continue to keep you updated on Community Day, what to expect, and how best to prepare for it.