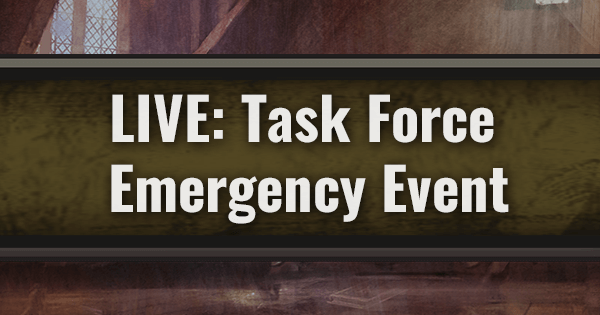 Wizards and witches, the first ever live release event for Wizards Unite has begun rolling out! The SOS Task Force Emergency Event is currently live in the first region (Asia-Pacific).

The event launch time is as follows for other regions:

As directly mentioned by HPWU Team member hpwu_fazes, the event consists of the following:

When you return Care of Magical Creatures Foundables, you will get double Family XP

For all Foundables that already have an Image placed in the Registry, you will get double Family XP

Certainly a very Magical Creature focused event - perhaps a nod to next week's impending Brilliant Event, which revolves around similar themes? Regardless, if your Care of Magical Creatures Registry Pages need filling, this is the time to get on that. Here's some things you should keep in mind for the Wizards Unite Task Force Emergency event.

Many community members have been thoroughly impatient for the first real Wizards Unite event... and it falls to us to remind you that this is not quite that 'real' event. Today's event is more like a brief change-up than a full-fledged event with new game content. That doesn't mean you can't get thoroughly hyped!

It just means you should keep in mind that we won't be getting any event-exclusive rewards or other content with today's event, and that's okay - we do have the Fantastic Flora and Fauna Brilliant Event to look forward to next week!

The best way to take advantage of today's event is to stock up on several items before foraying into the Magical Creature-infested wilds:

Highlights of this Event:

Note: these highlights are based on the bonuses mentioned in the official announcement of the event. See player reactions and feedback below for more information on how the event actually went in the APAC region.

Excellent if you need to farm Runestones and Scrolls

Great for filling out the Registry

Players in the Asia/Pacific region reported that there were no in-game changes for the event initially. About an hour after the scheduled start time, one of the game developers, hpwu_fazes, responded to player feedback on reddit and Discord:

Hi! For those of you with the event live now, we have fixed the Care of Magical Creatures Traces Issue. You should see more on your Map now. Thanks!

Overall, player feedback from Asia/Pacific has been relatively disappointed. The event seems to have been run primarily as a test for the Wizards Unite team to prepare for future events, rather than much of an event itself.

We'll continue to monitor for more news about the event as it goes live in other regions. Stay tuned for more information and feedback as it comes in.

UPDATE 11:24 PM PDT: The event has been live in the Americas/Greenland for about 20 minutes. We're hearing reports that new spawn points have been enabled, i.e. Traces can now spawn in certain areas they were not earlier.

Unfortunately, however, the rest of the event does line up to the relatively disappointed response from the other regions per our experience. "Increased Care of Magical Creatures spawns" has translated to "more Flobberworms" which is not what anyone was really looking forward to. We're keeping our eyes peeled for any communication from the HPWU team.