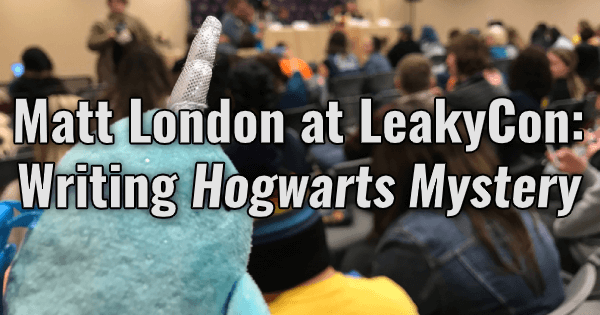 Earlier this month, we headed to LeakyCon Boston where Matt London, original writer for Harry Potter: Hogwarts Mystery, shared some of his experiences working on the game. For an overview of the whole event, be sure to check out our LeakyCon recap.

Here, we’re just going to talk about Matt London’s panels at LeakyCon: “Writing in the World of Potter” and “Hogwarts Mystery: A Retrospective.” Stay tuned as well for our interview with him, coming in a future article, as well as other interviews with LeakyCon guests and presenters.

If you missed the live tweets of either panel, we collected each one into a Twitter moment for easy reading:

Matt London was the Senior Narrative Designer and Lead Writer on Harry Potter: Hogwarts Mystery, the first Harry Potter mobile game published under the label Portkey Games (like Wizards Unite). He’s been a fan of Harry Potter since he first picked up the books in ninth grade.

He also wrote his own middle-grade book series, The Eighth Continent, published by Razorbill, an imprint of Penguin Random House.

The first of Matt London’s panels, “Writing in the World of Potter,” was a Q&A with Josh Wittge from LeakyCon’s Creative Programming team. In it, Wittge asked London many of the Harry Potter fandom’s burning questions about what it’s like to write a story that is officially part of the Wizarding World.

The second of London’s panels was his Mainstage presentation, “Hogwarts Mystery: A Retrospective.” London talked more in-depth about the process of actually writing the story and the characters, what it was like being part of the team, and more. He also shared some concept art from during development.

Before the game was announced, it was treated with a large degree of secrecy. Originally, it was called “Project Four” and referred to as the “video game project that must not be named” in a not-so-subtle nod to He Who Must Not Be Named. The early team was small, and it felt like working on an indie project, according to London.

“It felt like an indie game being made in a garage, and yet we had these huge companies interested in what the game was going to be” @themattlondon about making #HogwartsMystery. #LeakyCon

That’s not to say that Warner Brothers’ wasn’t involved though. WB and J.K. Rowling had clear rules for what would and would not be allowed for the game. Nothing could be retconned, no writing of canon, and everything needed to be plausible within the bounds of existing canon.

“It was incredibly important to Jo from the very beginning that [any ancillary content] remain true to any creative decisions she would make in her books.” @themattlondon on writing for #HogwartsMystery. #LeakyCon

For example, the Cursed Vaults story wouldn’t have worked if it was set during Harry’s years at Hogwarts. It’s just too hard to believe Harry wouldn’t have heard about them (and gotten himself involved). Players can’t choose to date canon characters like Charlie or Tonks because it would be considered “writing canon.”

The Hogwarts Mystery team also didn’t get any behind-the-scenes knowledge from Rowling about characters like Tonks or the elder Weasleys. All they had to work with was what’s already published in canon—and everything had to be approved by Rowling.

It was very important to Rowling, Warner Brothers, and the Hogwarts Mystery team that the game and its story be true to Rowling’s creative vision for the franchise. This went all the way to the smallest details of the game. London went so far as to analyse the way Rowling constructs sentences and paragraphs—even how she uses adjectives and adverbs—in Harry Potter in order to ensure the text of the game felt like it could have been written by her.

It’s also worth noting that Portkey Games, the label that published Hogwarts Mystery and Wizards Unite, actually has no employees. It’s just a label.

Warner Brothers’ rules meant that the Hogwarts Mystery team had to pick a timeline where they would have enough creative freedom to tell their story while still appealing to fans. While the Marauder’s era was initially the most popular option when polled, London says they didn’t want to dismiss the very large body of fan work of that era.

“So many fans had made their own works about that era, I didn’t want to be the one to go in and tell them they were wrong and here’s what really happened” @themattlondon on why they didn’t write Maurader’s Era #LeakyCon

In the end, the time frame just before Harry’s years at Hogwarts appealed because familiar, fan-favourite characters like Dumbledore, McGonagall, and Snape were all there without lots of canon to complicate things. It was also a comparatively unexplored era in fanon.

Inspiration for the story of Hogwarts Mystery, London said, came in part from the series of challenges in Sorcerer’s Stone. Many of the character archetypes were also inspired by those in Harry Potter, but the team also used the game as a chance to introduce archetypes that were missing or underrepresented in the original series.

Hogwarts Is for Everyone

London and the team wanted to give fans a game where they could live out dreams of going to Hogwarts. For the Hogwarts Mystery team, that meant making sure the game was accessible to as many people as possible.

Of course, it’s not enough to just want everyone to be able to play. There were several key ways the Hogwarts Mystery team tried to ensure the widest access, and London shared a few.

First of all, they went with an art style that would allow as many devices as possible to run the game.

“We wanted the game to be accessible to the widest number of handheld devices possible” @themattlondon on deciding the art style for #HogwartsMystery. #LeakyCon

Ensuring access to all also meant making sure the game was inclusive and representative of many different groups. Hogwarts Mystery features robust character customisation, and the team tried to include a diverse cast in the halls of Hogwarts so players could see themselves reflected there.

“It was really important to us that everyone who picks up this game feels like they belong at Hogwarts” @themattlondon on ensuring the cast was diverse and the avatar creation had plenty of customisation options in #HogwartsMystery. #LeakyCon

Even the monetisation strategy took access into consideration. While there is plenty of on-going debate in the mobile gaming industry about energy systems right now, the Hogwarts Mystery team chose it to ensure that everyone could access the full story for free. You’ll just need to be prepared to do a lot of waiting if you’re a free-to-play player.

Q about options on energy system. “It’s really challenging” to balance monetisation says @themattlondon. “It was important to us that the widest number of people would be able to play this game.“ They wanted there to be a fully F2P system. #HogwartsMystery. #LeakyCon

All in all, it was fantastic to hear from someone so deeply involved in the process of making Hogwarts Mystery, the first Harry Potter game with an original storyline. London had a lot to share, and this article would be a mile long if we were to include every detail he shared.

We’ll leave with just one parting thought. Matt London is clearly a big fan of fan works. Besides avoiding Marauder’s era out of respect for all the fanworks for the era, he also admitted that some details in the game—like a line about a student doodling Snape with cauldrons for hands and feet—were because the team hoped fans would make some fun art out of them.

Keep an eye out for our interview with Matt London, coming soon, as well as interviews with other guests and presenters from LeakyCon!