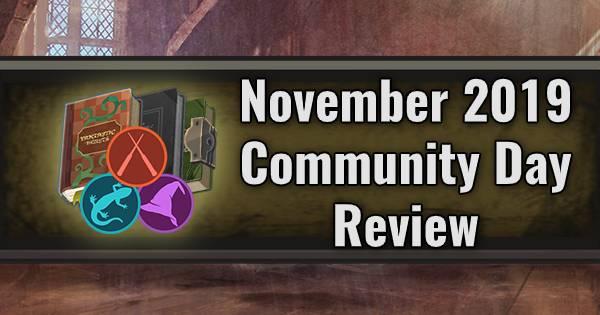 The November 2019 Community Day for Wizards Unite has wrapped up, so now’s a prime time to look back and see how it went, how it compares to past Community Days, and what it could mean for future Community Days. This is all going to be personal opinion, so if you have a different opinion on how this month’s Community Day went, be sure to comment in our Community Section!

First things first, the rewards for this Community Day were amazing. With a possible total of 145 Spell Energy through the special assignment tasks, along with some much needed Spell Books, it was absolutely worth it to complete all four sets of tasks. If you had a five person team and had everyone become in-game friends, then these rewards got even better. For those who were able to play at a Sponsored Fortress, then the rewards would get even better on top of everything else. The way that the Wizards Unite team really incentivized doing everything they laid out for the day (the Fortress focus, teaming up with friends, etc.) really made it feel like you were rewarded for participating in the event.

The guaranteed Exploration fragments were also nice because it helped players make progress with the Registry, rather than simply grinding out Fortresses. In the vein of Fortresses though, some people were able to farm higher-level Dark Chambers for a lot of Challenge XP, helping them earn even more Spell Books. Some other enterprising farmers were able to harvest all kinds of Exploration fragments from any Tower, Forest, or Dark Chamber, helping fill out the Registry even more. With these ways of farming the Fortress Chambers, the whole event felt synergized and like the WU team really thought of everything when designing this Community Day.

The biggest issue with this Community Day was not its design but its bugs. Due to a technical issue (possibly related to Daylight Savings), the event started an hour early (10am local time) in many regions, primarily Europe and the Americas.

The event started at the correct time for the first timezones (Asia-Pacific), but it hit issues once the event started rolling out to Europe. As the Wizards Unite team is based in San Francisco, most of the team was asleep, so a fix could not be issued immediately.

Eventually, the team adjusted the code to have the event run for four hours, which solved the issue for some regions, but it was too late for those who had already had the event end early.

This imbalance upset some players, particularly those who were only able to play for two hours, due to the event ending early in their timezone, and those who played at Sponsored Fortresses which did not open until 11am anyway. While the additional hour was likely the best solution at the time, given the circumstances, it would of course have been even better not to have the issue at all.

The Wizards Unite team has told players in regions where the event ended early (Europe, primarily) to look out for news about a potential make-up of some sort. Nothing has been promised yet, but there will hopefully be news some time this week.

All things considered, this month’s Community Day was a great event that was unfortunately hindered by bugs for those in Europe. For those in regions where the event ended on time, it was a fantastic event. It was nice to see so many communities come together and have fun together for an afternoon.

The focus on Fortresses was really nice since walking around to find Trace Encounters is going to get harder in some areas as we get deeper into winter (or as the summer heats up for everyone in the Southern hemisphere). The bonuses were really worth it, and a lot of new players were able to go up 40 ranks in Challenges and was just a really great way to get them into the game.

This month really hit on the community aspect of Community Day. It was nice to have everyone together, learn more about each other’s Professions, and just have a good time playing a game we all enjoy.

Site Co-Lead for Wizards Unite
Focus on Community Management and Engagement
I am very passionate about the community and Wizards Unite.
I look forward to working with you and enjoying this awesome game!
If you have any questions please feel free to reach out.