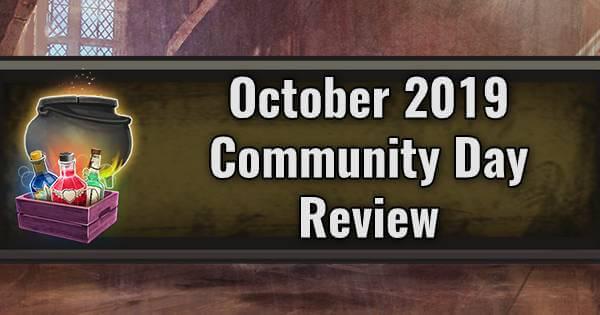 Now that the make-up for the October 2019 Community Day for Harry Potter: Wizards Unite has passed, it’s the perfect time to look back on this Community Day and see how it was to play, how it stacks up against past Community Days, and what it could mean for future Community Days. Just a reminder, all of this is my own personal opinion so take all of this with a little grain of salt. That being said, if you have a different opinion on this month’s Community Day, be sure to leave a comment in our community section!

Right off the bat, I’m going on the record to say that this was my favorite Community Day so far. Technical issues aside, I think that everything that Niantic planned out worked really well not just for the event itself, but for everything that they’ve set up this month.

First off, the theming of this Community Day hit all the right notes for me. It’s October, it’s Halloween month, and the folks at Niantic really seem to have fully utilized everything the Harry Potter universe has to offer in terms of hitting all of the Halloween high notes. The increased spawn rates for Werewolf and Vampire Oddities hits all of the old school horror references that I look for each spoopy season. On a more practical note, I really appreciated these increased spawns, and especially the increased spawn rate for Doxy Oddities, because I have pretty bad luck in getting these Oddities to spawn around where I live.

The emphasis on the Tonic for Trace Detection was a really nice touch as well. As the newest potion, the Tonic for Trace Detection needed something to help establish it alongside classics such as the Potent Exstimulo and Baruffio’s Brain Elixer. By temporarily limiting the Tonic’s effects to increasing spawn rates for just the Vampire, Werewolf, and Doxy Oddities not only incentivized me to use it to get those sweet sweet Doxys, but also stocked up my potion inventory to use for the second week of the Fighting Forces event. The free store pack being mostly ingredients for the Tonic for Trace Detection also helped maximize the goody I got out of those three hours. All in all, the emphasis on this new potion worked really well not just for the Community Day itself, but also integrated really well into the month’s events as a whole.

Speaking of the month as a whole, using this Community Day as a sort of preamble to the Halloween Quest at the end of the month got me really hyped to tackle the basilisk later this week. Since all Oddities had the chance to drop special Halloween Runestones, and with Oddities spawning in way more often for those three hours, I’ve got enough stored up to give myself a few cracks at the special Fortress Chambers.

The last thing that I thought was really great about this Community Day was that it took place during the same time frame for each time zone. Past Community Days had different times for each player region, but this month had it set for 11:00 AM - 2:00 PM local time everywhere in the world. I think this worked really well because it makes it easy to know when the event is happening in your area and cut out the possibility of reporting errors due to forgetting time zone differences or daylight savings time. I hope that the Wizards Unite team keeps this approach for future Community Days so I don’t miss another one like I did in September because I accidentally wrote down when it was active during Pacific Time instead of Central Time.

There wasn’t a whole lot that I didn’t like for this Community Day, but my biggest gripe was that Partner Inns gave out more Spell Energy. There aren’t very many inns around me to begin with, and there aren’t any Partner Inns within walking distance of where I live. I think Partner Inns are really great if you have one near you, either at home or work, but if you’re like me then it feels like you’re missing out on the full benefits of the whole event.

It’s also not great that there were so many technical issues in rolling out this Community Day, leading to them having to have a make-up event on October 27th for players in the UTC +12:00 and UTC +13:00 time zones.

All in all, this was a really great Community Day that worked really well the rest of Dark Arts Month, despite some technical issues. I hope they continue this kind of theming and tie-in with future Community Days and the Brilliant Events that go on around them!