Opinion: The Library Event Was... Okay 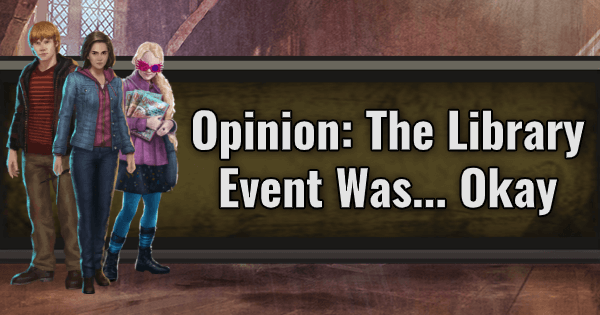 As International Games Week has come to an end, we thought we’d take a moment to look back on this unique Wizards Unite event. Overall, the event seemed to inspire very mixed reviews from players. Personally, I found the idea of the event fantastic, while the execution was more of a mixed bag with a lot of room for improvement.

First of all, tying events to libraries is a great fit for this game. The Harry Potter franchise started off as just a book series, and libraries and librarians have always been a big part of the community. Over the years, they have:

Compared to most Sponsored Locations (phone stores, often in strip malls), libraries are great all-weather spots for players to hang out and play—assuming they have enough Inns and spawns, but we’ll get there in a moment.

While the best part of the event was the tie-in with libraries, there were some in-game aspects that worked well too. Assuming you found a library with good spawns and enough Spell Energy, sitting at a library for a bit was a great way to farm Legends of Hogwarts Family XP.

Players keen to prestige their Registry pages could use the event as a way to rank up Legends of Hogwarts and collect the Runestones necessary to complete all of the Fortress-only Foundables—especially the Half-Blood Prince’s Copy of Advanced Potion Making.

Of course, while none of the featured spawns were easily-farmable Low Threats, the recent buff to potions meant players could put on one potion and use it for several of the event spawns back to back. (In fact, at one point, my library had seven Hermiones, so I used a couple Strong Exstimulo Potions to catch several at once and collect a healthy 56 FXP in only a few casts.)

However, while my local libraries were overflowing with event spawns (and Inns), many players didn’t have the same experience, for a variety of different reasons.

First of all, not every library is properly marked in Open Street Maps (OSM), where Niantic pulled their data from. OSM was probably the best option available, but as an open-source map, it relies on volunteers to keep it up to date, and some areas are better mapped than others.

Even if your local library is mapped properly on OSM though, that was no guarantee that you would see any of the event spawns there. While we weren’t able to determine the exact reason some libraries weren’t producing spawns, there seem to have been a couple factors.

First, libraries without Hogwarts School landmark flags, despite being tagged in OSM, reportedly did not have any event spawns. Even some libraries with these flags, however, were poor spawn areas, so it was hard to find any spawns, let alone the event ones.

While Brilliant Events add additional spawn points, meaning the event spawns are in addition to normal spawns, this event seems to have just replaced the possible spawns for each spawn point. In other words, libraries didn’t have more spawns. They just had different spawns.

For libraries like mine, that didn’t make much difference, but others had no such luck. All libraries should have had increased numbers of spawns, not just different spawns, in order to make sure all libraries were viable locations for the event.

In the end, all of these factors together made it hard for some players to even participate in the event, as finding a good library was more work than the spawns justified.

Speaking of the spawns, while Hermione was a great fit, the others didn’t fit anywhere near as well thematically. In fact, I’m not even sure there is ever a moment in canon where we see Sprout or Flitwick at the library. Ron was at the library with Hermione plenty of times, but where why Ron but no Harry? It felt arbitrary.

Any of the book Foundables—Magick Moste Evile, Monster Book of Monsters, and Quill of Acceptance and Book of Admittance—would have made more sense for the library. A library event also could have been a great time to release Madam Pince, the Hogwarts Librarian.

None of the featured spawns were ones that gated pages either. Luna, Neville, and Hermione are on the rarer side for their respective pages, but Ginny or Duelling Dummy and Dumbledore are the real gates for those pages.

For some players, that meant they weren’t really motivated to go to a library for the event. Even for those who wanted to collect Family XP, the lack of any Low Threat Foundables (and a significant increase in Severes) meant more spell energy and/or potions were needed than just playing in a normal area.

If you had a Legends of Hogwarts flagged area near you, that was likely a better option than the event if your goal was just to collect Family XP.

All in all, the event was a good idea that struggled to live up to its full potential. For me, it was an excuse to finally pick up a new library card and some books while earning another Runestone or two, but it wasn’t worth going to the library just for the spawns.

Hopefully, we’ll see libraries take a bigger role in the game in the future—but with several adjustments to ensure it really is all libraries and to better motivate players to actually visit their local libraries.