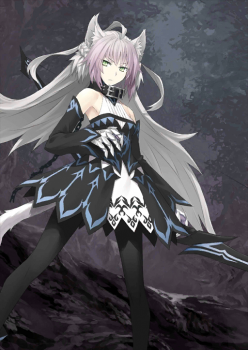 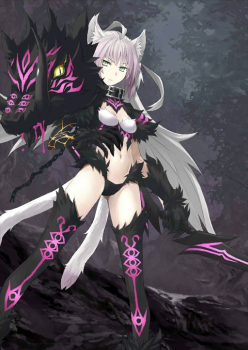 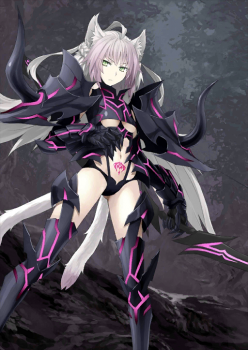 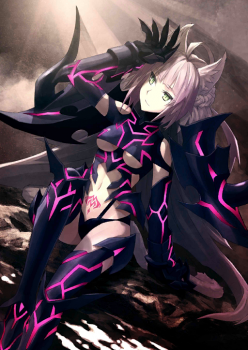 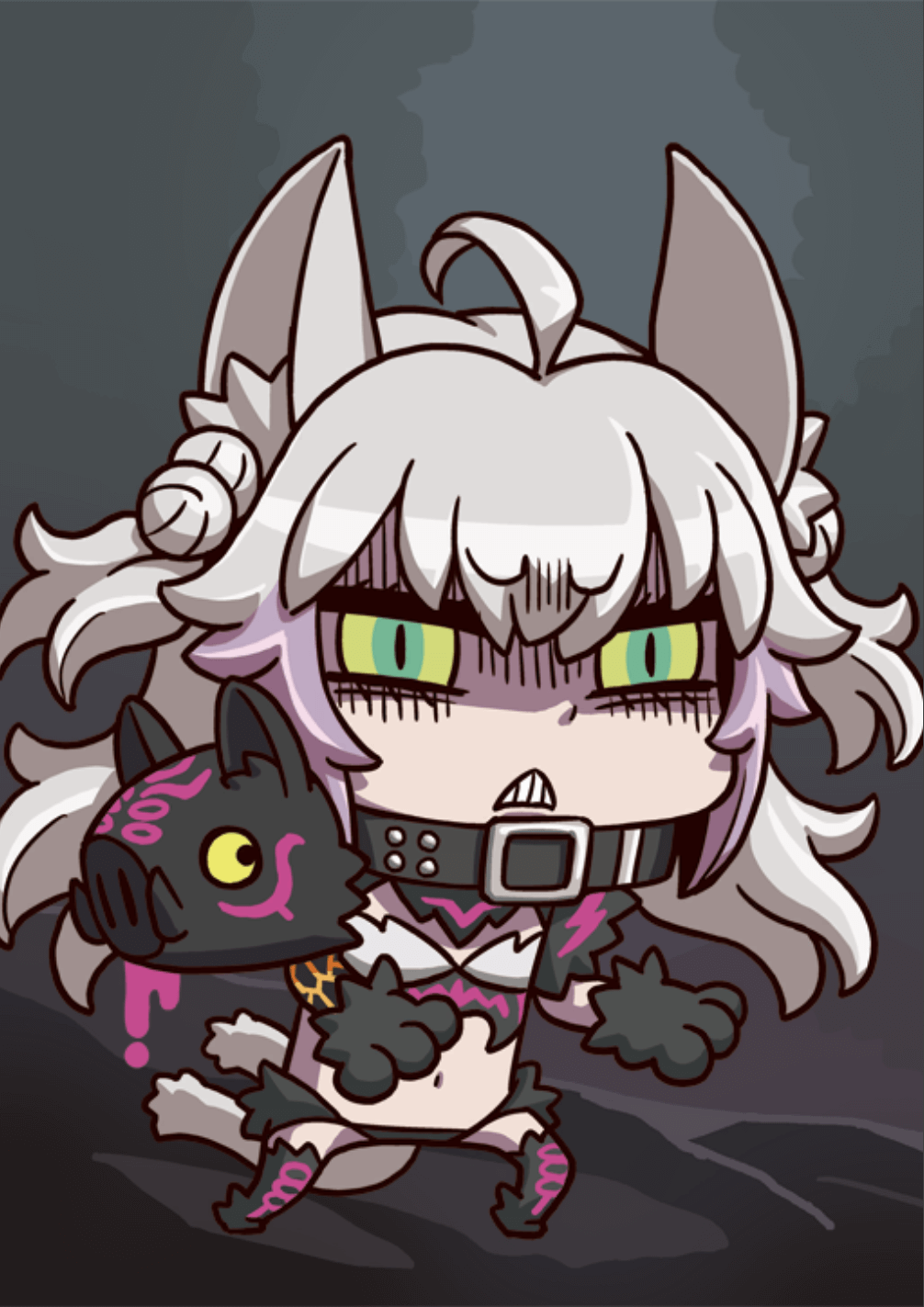 The Arrow that Eclipsed The Somber Sky

When equipped on Atalante (Alter),
Increase all allies' Quick Card effectiveness by 15% & Critical Strength by 15% & decrease DEF by 10% [Demerit] when she is on the field

“I want to be a beast. I do not feel anything, I just want to become a beast that only kills her.”

Infused with the strength of the Pelt of Calydon, Atalante (Alter) adopts a far more beast-like mindset compared to her Archer counterpart, a phenomenon which in practice is similar to the skill Mad Enhancement. Even as a Berserker, she retains a Quick and critical-oriented kit reminiscent of her normal form, though it is much more offensive in nature with a single target Quick NP.

Atalante (Alter)’s primary steroid is her trademark skill Beyond Arcadia, which buffs the Quick Effectiveness of both herself as well as her whole party, but she further complements this with the Critical Damage Up provided by Feral Logic as well as Independent Action. These buffs result in her having a very strong damage potential, especially when her Berserker class’s 1.5x advantage is factored in. As an added utility bonus, her NP Tauropolos Skia Thermokrasia applies an NP Seal on the target, which helps stall the enemy’s NP during difficult encounters.

Unfortunately, transforming into a Berserker has its disadvantages as well, and for Atalante (Alter), this primarily comes in the form of the class’s notoriously low Star Weight. While she is to some extent able to bypass this weakness through Self Evolution, the skill’s (rather extreme) Star Gather Rate up only lasts for one turn, making her critical potential on other turns unreliable at best unless a large supply of stars is available. As with most other Berserkers, Atalante (Alter) also suffers from low long-term survivability. While her third skill’s Evasion helps somewhat, it is not enough to keep her alive for longer or more intense fights, especially as Masters might want to buff her Critical Damage early in the fight.

All in all, Atalante (Alter) thus fits comfortably into the glass cannon archetype. Furthermore, as an offensive Quick Servant, she also benefits from the existence of Scathach=Skadi, whose help further increases Atalante’s damage and even improves her already decent NP Gain. As such, the biggest concern when using her is generally the availability of critical stars, which can be solved via CE choices, her own Quick chains with her NP, or certain star generating supports.

With a Quick Effectiveness Up as well as a three-turn Critical Damage Up, Atalante (Alter) is capable of dealing a lot of damage through her NP and her critical Hits. Even her basic Therianthropy and Independent Action boosted attacks allow her to take out chunks of an enemy’s health bar. Given Self Evolution grants an absurd Critical Star Gather Rate and a healthy dose of 10 Critical Stars, Atalante is also very responsive if Masters do want to force that critical turn.

Note that with the support of Scathach=Skadi, this high damage potential is increased to unprecedented levels, enabling her to deplete the HP bars of most enemy bosses. Naturally, this is very useful if Masters lack an appropriate Class Advantaged Servant.

While Atalante (Alter)’s base NP Gain stats are not that different compared to other Berserkers, the fact that she has an extra Quick card as well as a Quick NP (which is capable of providing some NP refund) greatly increases her average NP Gain, especially as she can buff her Quick Effectiveness through Beyond Arcadia. Her occasional critical hits and her high defensive NP Gain further improve on this aspect of her gameplay, as do any Quick buffs a Master can support her with.

Despite being an offensive Servant, Atalante (Alter) is not without some utility of her own, as her NP also applies an NP Seal on its target, preventing them from charging or using their NP for one turn (though it should be used with caution as to not interfere with the use of defensive skills). On the support side, while Beyond Arcadia would most of the time be used to boost Atalante’s own damage, the buff’s party-wide nature may prove useful during NP Chain turns, or when she is not the party’s sole damage dealer.

The Berserker class’s low Star Weight is something that plagues most critical-oriented Berserkers, and Atalante (Alter) is no exception. While Self-Evolution’s Star Gather Rate Up provides a welcome remedy, it only lasts for only one turn, which means that she is at the mercy of RNG (and the sheer amount of stars the party is capable of producing) most of the time. Fortunately, it is entirely possible to bypass this weakness for the most important of turns, through the utilization of instant star-generating measures (such as Golden Catches the Carp).

In the short term, Atalante (Alter) is capable of surviving well enough thanks to her third skill’s Evasion. As it is her only direct defensive measure, though, the increased damage she takes due to her Berserker class will start to rear its ugly head in longer fights, and even with the aid of supports, she can still be wiped out by a stray critical hit. As such, it is recommended to end fights as early as possible

All three of Atalante (Alter)’s skills provide different benefits to her offensive capability, and should ideally be maxed if she is to be used intensively. Still, for Masters who are strapped for resources, focusing on her second skill is generally the best course of action, while her Star Gather skill already starts out strong and can be left at 6 for a while.

As Atalante (Alter) lacks any sort of NP Charge skill, it is highly recommended to equip Starting NP Gauge CEs on her over anything else to ensure her NP is ready in time. With the help of NP Charging supports, hybrid options featuring offensive effects such as Attack Up, NP Damage Up and Quick Performance Up may also be used.

Using the hide of the Calydonian Boar—her Noble Phantasm—Atalante has transformed herself. She may also be referred to as Atalante Metamorphosis.

Even though her stat increase is equivalent to an A-rank Madness Enhancement, she is one of the few Berserkers who retains her calm, since her Demonic Beast form is a consequence of her covering herself in the Calydonian Boar hide. Since her transformation is not born of rage, but rather because of her being in a bestial form when she was summoned, its rank is lower than when it is used as a Noble Phantasm.
She can attack with all the ferocity of a beast, but still has the presence of mind to be able to retreat if she must. However, the moment she considers someone an enemy, it is not possible to talk her down.

Self-Evolution: EX
A self-improving skill that surpasses the Self-Modification skill.
Allows the user to evolve in a matter of seconds to overcome any obstacle and achieve their aims. Unfortunately, this skill is not as adaptable as Self-Modification, since it is intended for a very specialized purpose.

Feral Logic: B
An approach to combat that was born from her transformation into a beast. Drastically accelerates the thought processes that themselves lead to quick kills, but renders one unable to exploit the enemy's weakness in inventive ways. Use together with the Self-Evolution skill to defeat enemies even faster.

[Tauropolos Skia Thermokrasía]
Rank: A
NP Type: Anti-Personnel
Range: 1 - 99
Maximum Targets: 1
Dark Heavens, Corroding Arrow.
Tauropolos, which is used by her Archer form, is embedded within her to allow her to deal a devastating blow using all of her magical energy.
The attack itself is more akin to a ballistic missile than an arrow. The target is hit and then entrapped within a lingering, all-consuming darkness that devours them whole. To survive this would require an extremely powerful Magic Resistance skill.

While she is capable of communicating even with a skill similar to Madness Enhancement, it is more or less impossible to change her mind about anything using conventional logic.

She does not care whether you are an ally of humanity. So long as you do not prevent her from carrying out what she swore to herself to do—no matter how much of a beast she has become—she can be a very faithful Servant. She will, however, gladly abandon her Master should their relationship conflict with her own code. In such circumstances, she may not even recognize her own Master. Of course, so long as you don't break her rule, this will never be an issue...

Worth rolling for Abby if you have MHXX?
So I’m thinking of rolling for Abby cos I think she’s super cute. Also, I’d like…
What is the most annoying Ascension/skill mats IYO?
For me it’s proof of hero Recently I decided to lvl Alex to his final ascension the…
Zerkerlot, Parvati or Atalante?
I’m sure everyone’s seen their fair share of SR ticket threads here by now but bear…
Heaven's Feel Theatrical Release
Advance tickets finally went on sale in my area this morning. Who all is making plans…
Lancelot or nah
Basically title, honestly my account is stacked at this point for farming but there’s…
Read More