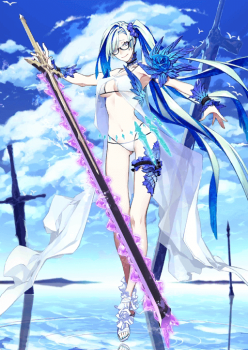 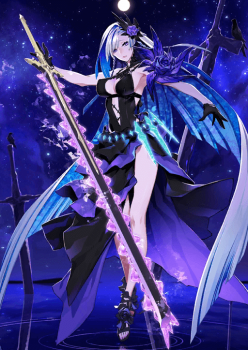 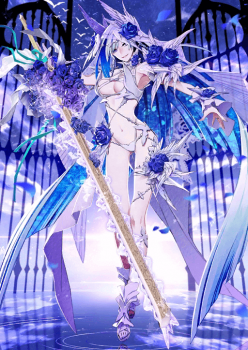 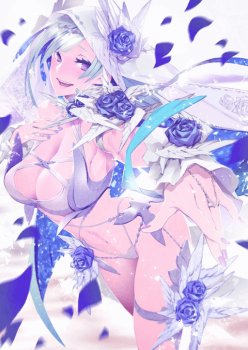 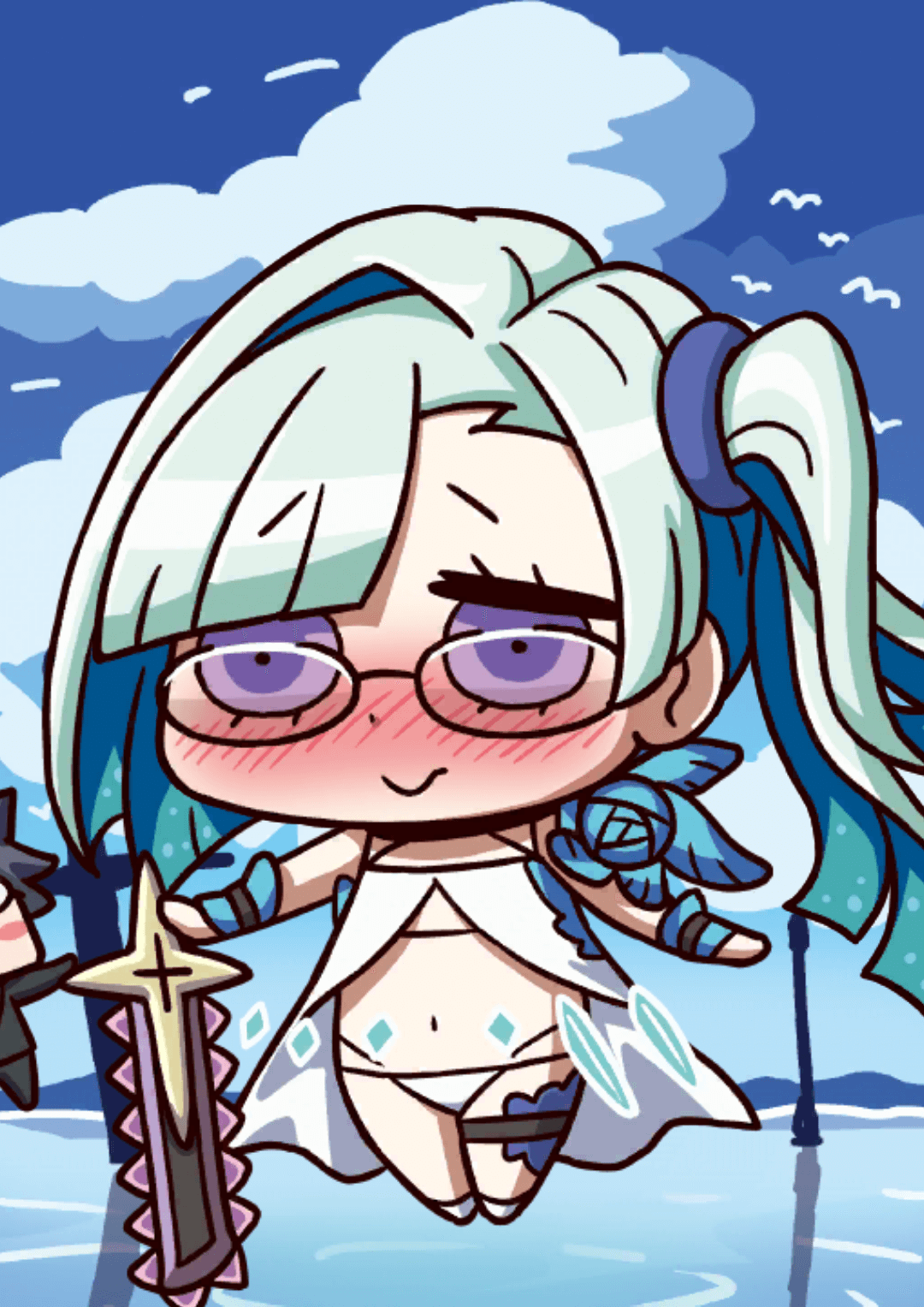 Wisdom of Summer B

Increase your Buster Card effectiveness by 3.5%.

Apply Ignore Invincible to self (1 turn) [Activates first].
Deal damage to all enemies.

Attack, Until the Moment of Death

Brynhild, the chief of the Valkyries, is well known for wanting nothing more than to kill Sigurd whenever she sees him. Remove her bloodlust and you get a Berserker in a swimsuit wanting to shower Sigurd with love. Fate logic. As an AoE Buster Berserker, Brynhild offers a steady widespread damage pool for Masters needing a Servant with Ignore Invincible.

Bryn’s biggest strength is her Noble Phantasm. With Ignore Invincible, which activates before damage, and Berserker advantage against (almost) all enemies, she is capable of handling many of the trickier matchups she’d face. Thanks to the powers of Wisdom of Summer she can charge her NP gauge with little difficulty, while creating a small pool of stars for use. She also can serve as an auxiliary support for males (and a couple of females) with her Summertime Lovers card boost.

Unfortunately, while her Noble Phantasm is unavoidable, it also is particularly weak. With only Madness Enhancement D- and fairly low boosts to her Buster Cards on Summertime Lovers and her Noble Phantasm’s overcharge, she’ll struggle to pack the required punch. Her durability is also questionable with

Swan Dress (Summer)’s limited evasion serving as her entire endurance set. Without it, a single critical hit could take her out.

Bryn is a decent option for a Master wanting Ignore Invincible or extra support for Arts or Buster based Male Servants. But since her 2nd ascension’s swimsuit is so damn cute, all Masters would want her anyways!

While most Servants with an Ignore Invincibility effect have it as a skill with cooldown, Bryn’s activates every time she uses her Noble Phantasm. To make matters better, it’s a 1-turn pierce instead of a 1-time, meaning any attacks she does after her Noble Phantasm will have the same effect. This could add some consistency to runs using her regardless of enemy skills.

In theory, Bryn can generate 60% gauge over 3 turns, enabling most mixed CEs to work with her on longer fights. If a Master unlocks her Mana Tuning Append skill, she only needs 2 turns to reach maximum gauge so that she can unleash her NP on the 3rd wave (which may often fall on the 3rd turn). Her non-skill based NP gain is not particularly good, being a gorilla style Berserker and not having particularly notable hit counts, so most Masters should expect to use her as a one-and-done.

While not a common usage, Bryn could be used as a support Servant thanks to her ability to provide up to 30% Arts and Buster boosts to any Loved One ally. This 3-turn boost for all members of the party is one of the highest available.

Bryn’s damage suffers as she doesn’t have access to any ATK or NP damage buffs. Further, as a Berserker she will not pull critical stars, so her sustained damage drops dramatically. Among 4-stars Berserkers she is one of the strongest, but this isn’t saying much. In most cases, a 2x class advantaged Servant would end up being a stronger option.

Bryn’s first skill offers her a 2-hit evasion and a 3-hit flat damage reduction. While the evasion is welcome, the damage reduction will likely do nothing after taking double damage. With her low HP, she likely can only take 3 or 4 hits (evasion included) before she leaves the field.

Most Masters are looking to use Brynhild for damage and should prioritize giving her the most damage on a single shot. By boosting up her 2nd skill’s charge to max and adding damage with her 3rd skill, her offensive capacity is enabled to its fullest. Her first skill can generally be left alone as Damage Cut won’t make much of a difference for her.

Brynhild’s Noble Phantasm will likely be used once in a match and increases in power with Overcharge, so a CE with an Overcharge Effect is one of the most powerful she can use. Noble Phantasm Damage CEs are also effective for her if she has support at the cost of whittling down her already weak constitution. Barring those, a Mixed Damage / Starting Gauge CE is as effective as ever on a damage dealer.

Having decided to visit the midsummer lake shore...she forcibly changed her Spirit Origin on her own using her Primeval Runes! Her usual, more volatile Spirit Origin is gone and now she's a mild-mannered woman given to loving shows of PDA with the great hero Sigurd...

But one night, a scream is heard. Sigurd is found lying in a pool of blood, Brynhild at his side, absolutely covered in blood herself! What the heck happened...!?

Sigurd stubbornly denies even the existence of a culprit (he will keep getting up as many times as it takes). Brynhild only acts flustered. And in her hand is a new Noble Phantasm, soaked in blood. What the HECK happened...!?

Pretty much the same as the normal Brynhild (Lancer), and she acts gentle and devoted. However, unlike her normal self, her feelings for her loving Sigurd are entirely out in the open. She intends to celebrate their love without hesitation, and plans to enjoy a midsummer vacation near the lake. Surprisingly, she will never utter menacing threats like "I will kill you" or "I shall kill you." It's as if this Spirit Origin of hers unwittingly seals her impulse to kill her loved one (Sigurd).
And yet...

Swan Dress (Summer): A+
A white bikini. Incorrect. It's a swan dress, the robe of the warrior maidens who conquer the skies transformed to be more suitable to wear by the shores of the midsummer lake. It also confers flight upon the wearer.

Wisdom of Summer: B
A crystallization of the wisdom of the gods who know almost everything about summer. A pair of glasses created with Sigurd.

At Least until the Moment of Death.
After the Heroic Spirit Brynhild temporarily summons a giant, transparent blue sword, the Heroic Spirit Sigurd swings it down to vanquish the enemy. It's a momentary combined attack/combined Noble Phantasm.

Brynhild summons the giant weapon that she alone cannot wield and Sigurd swings the giant weapon that he alone cannot summon. The weapon itself is the sacred sword the allfather Odin bestowed upon the god of war, Týr, and Brynhild personally copied it using her Primordial Rune. While it may be an imitation, it still possesses the strength befitting an armament of the gods.