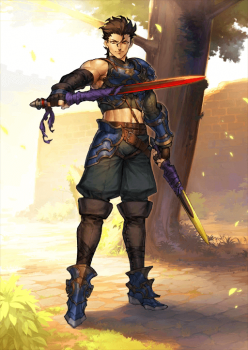 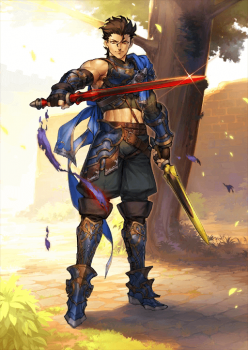 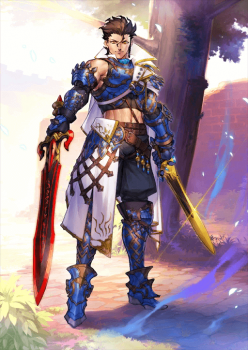 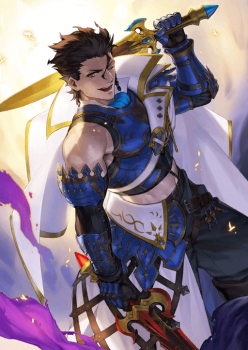 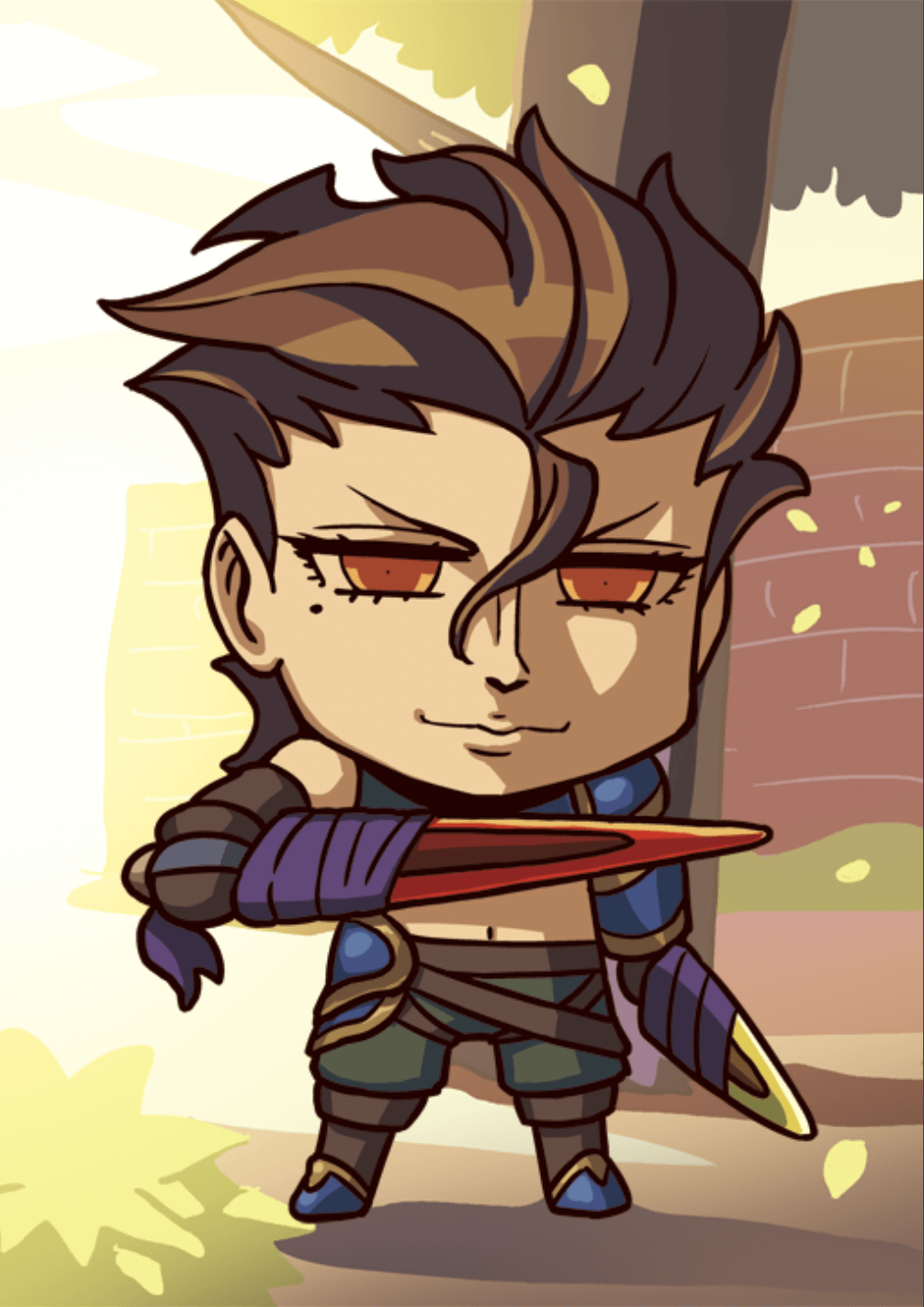 The Knights of Fianna's Honor B

Deal significant damage to a single enemy.
Removes defensive buffs from a single enemy. [Applies after damage]
(Defensive Buffs include Def Up, Evade, and Invincible)

Low chance of inflicting Death to a single enemy.

When equipped on Diarmuid Ua Duibhne (Saber),
Increase all allies' Quick and Buster Card effectiveness by 10% when he is on the field.

“Well then, let me show you. My death-bringing lance, er, sword!”

Móralltach and Beagalltach, Fury and Passion, the two swords gifted by the god Manannan; these are the weapons carried by Diarmuid’s Saber form. A version which emphasizes the knight’s relation to the gods of Celtic mythology, Diarmuid (Saber) is an ST Quick damage dealer whose kit strikes a fine balance between dependable offense and formidable defense.

Diarmuid (Saber)’s primary source of damage is his NP Móralltach. While the NP itself is an unexceptional single-target Noble Phantasm for the most part (its defense buff removal, unfortunately, happens after damage), its high hit count results in considerable NP refund when infused with external Quick buffs and his third skill Beagalltach, which also amps up the already-decent NP gain of Diarmuid’s normal command cards. The critical reliability provided by The Knights of Fianna's Honor and Diarmuid’s own Star gain capabilities also contribute to his NP Gain potential and damage. Lastly, Diarmuid is also solid defensively thanks to Beagalltach’s Defense Up and Evasion from Mana Burst (Jump), the latter of which also acts as his primary damage boost.

Diarmuid’s potential, however, is limited by his own questionable damage ceiling. Having only a single damage increasing skill with slightly subpar modifiers and a one-turn duration, he excels at neither burst nor sustained damage. Coupled with Diarmuid’s lack of a personal NP Charge, these factors make him reliant on external support and CE choice to perform well in a team environment, as he needs external aid in terms of NP Charge and Critical Damage buffs, among other things.

In summary, Diarmuid is a Servant whose issues limit what he can ultimately accomplish, yet there are definitely situations in which he can shine. His high survivability and good command cards make him a good fit for soloing, and with proper support he becomes a reliable single-target Quick damage dealer option, especially against Lancers.

Móralltach’s high hit count means that it pairs well with external Quick buffs, allowing the NP to generate a lot of critical stars as well as a decent amount of NP charge. Combined with his normal cards and potential criticals, Diarmuid is capable of refunding a majority of his NP charge under the right setup, making the NP relatively spammable.

Diarmuid (Saber)’s NP gain comes primarily from the combination of decent base generation stats, the NP Gain Up from his third skill, and his criticals, which Diarmuid can perform quite reliably. This critical consistency comes from the fact that his high hit count translates into decent star generation (particularly on his Quick and Extra cards), which is further complemented by The Knights of Fianna's Honor’s instant critical stars and Star Absorption Up.

Having a three-turn Defense Up buff from his third skill and an Evasion on his first, Diarmuid is a rather survivable damage dealer. While the latter being tied to his primary damage buff makes it hard to capitalize upon, it is generally still a welcome reduction of incoming damage and can be a deciding factor in a pinch.

While Diarmuid comes with a solid Attack stat as well as a single-target NP, his one damage boost only lasts for one turn. While his critical hits are reliable, he has no way to increase their damage outside of the turn in which his first skill is active. As his NP gain-related advantages rely on using his Quick and Arts cards, his overall damage potential is somewhat reduced, while his Buster cards (being mostly unbuffed) aren’t particularly impressive either in terms of damage.

Diarmuid’s qualities of high NP hit count, good NP gain and reliable criticals only truly shine when he is given sufficient buffs. Without them, his damage-related problems will become apparent, while his NP gain won’t be sufficient to perform NP spam on a reliable level.

Diarmuid’s NP has a built-in defensive buff removal, but unfortunately, the effect is only applied after its damage, meaning that an enemy with Evasion will still be able to defend against his NP damage. His NP’s Instant Kill is also situational at best due to its low chance.

Being a Servant who relies more on his natural capabilities, Diarmuid (Saber) does not require high skill levels to function. Still, if he is to be used as a primary Saber, all three of his skills contribute to his offense in one way or another, and should be invested into, even if not maxed.

Starting NP Gauge CEs are generally prime choices for Diarmuid (Saber), as well as hybrid versions thereof. Secondary effects featuring Quick Performance Up, NP Damage Up, Attack Up and Critical Damage Up are preferred. In general, pure damage-increase CEs are not as recommended but may still be used, especially those with the aforementioned offensive effects.