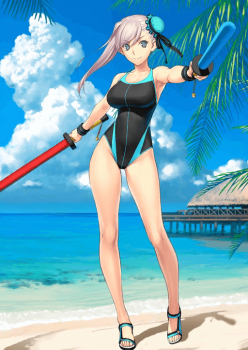 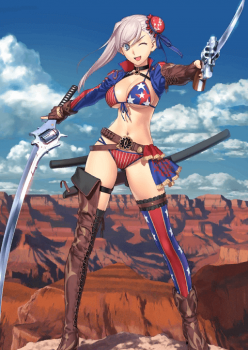 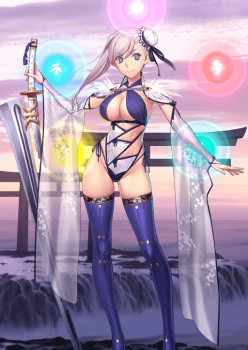 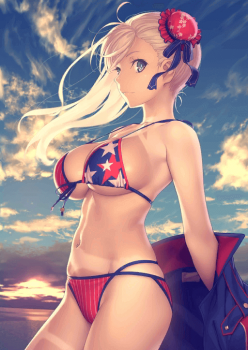 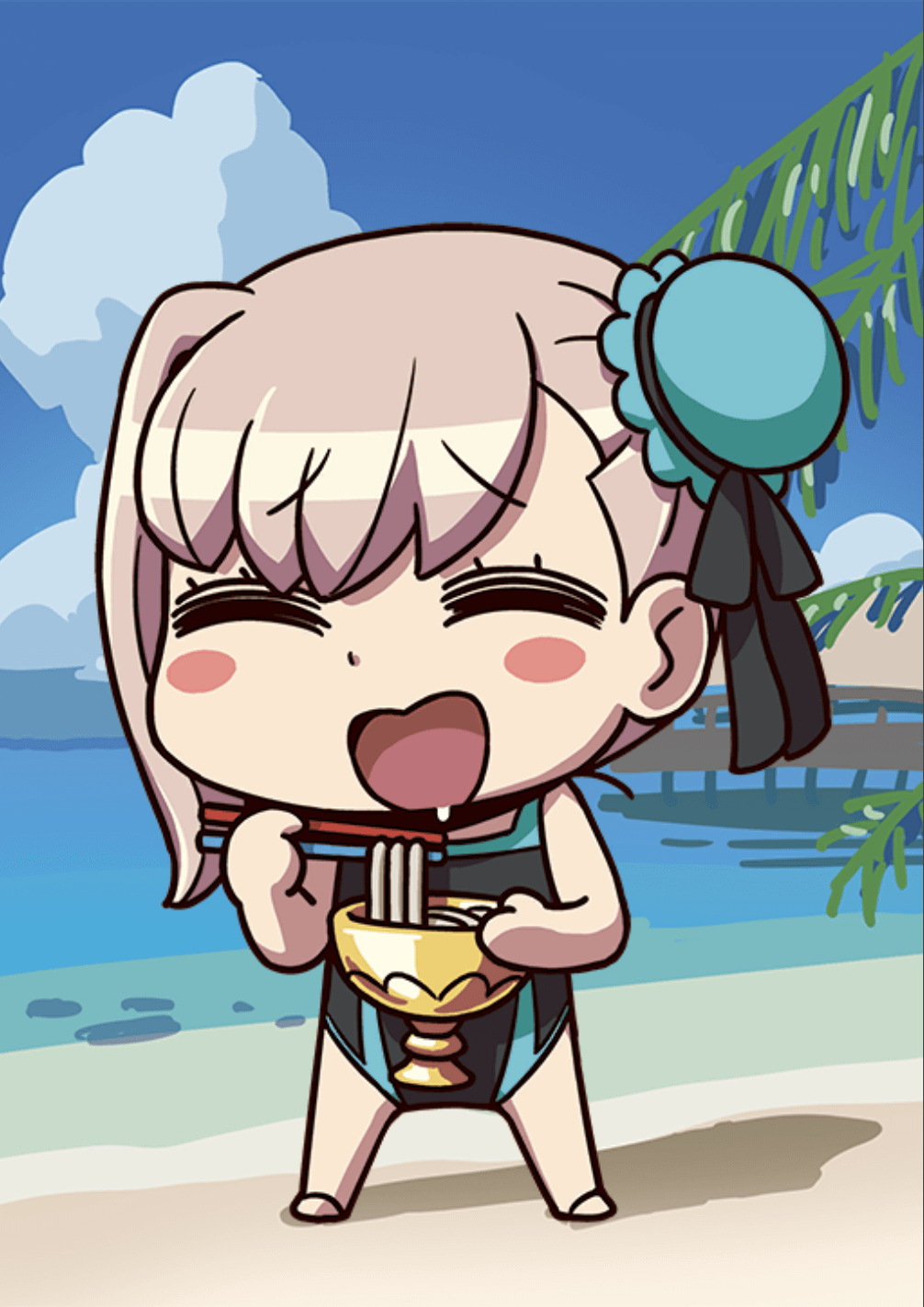 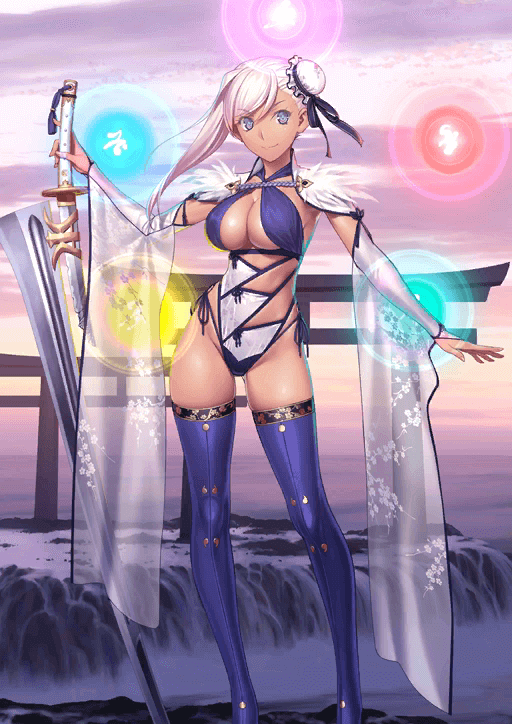 Self Guts Self Damage [Demerit]

Apply Ignore Invincibility to self (3 turns).
Increase your ATK (3 turns).
Apply Guts to yourself (1 time, 3 turns, Revives with 1 HP).
Deals 5000 damage to self. [Demerit]
Decrease DEF for all enemies (3 turns).

Deal damage to all enemies.
Decrease Critical Rate by 30% for all enemies (3 turns).

Escaping from the Cursed Sword, Commence!

When equipped on Miyamoto Musashi (Berserker),
Apply NP damage up 30% and Buff Removal Resistance up 100% (3 times) for herself only.

The destructive power of dynamite! I, Niten-Ichiryu Musashi, make my grand entrance in the Western summer way!

“Miyamoto Musashi? That one’s dead and gone, stupid! The woman in front of you loves the blue sky, and however you look at me I’m fully American! Yay! With a favorite weapon in each hand, I’m a bodyguard ready to fully enjoy summer! You can call me Miyamoto Iori!”

An athlete skilled in the usage of Japanese swords, as well as other types of weaponry, the Niten-Ichiryu Berserker drops in unannounced!

“What about water battles?! The Niten Ichiryū can fight anywhere!”

Even the renowned Niten-Ichiryu swordsman, Miyamoto Musashi, has fallen to the demon known as the swimsuit— such is the power of summer. The change in appearance, however, hasn’t diminished her explosive offensive power in the least. Musashi holds immense farming potential; all she needs is an opportunity to bring this potential to full bloom.

Musashi’s Berserker class and her AoE Arts NP are the two pillars which cement her place in the farming meta. The former means that her damage will be consistent against almost all enemies, while the latter allows her to benefit from the famous NP refund advantage of Arts compositions. Capitalizing on this Arts leaning is Fifth Zenith, which greatly increases the effectiveness of her normal Arts command cards while also increasing her NP Gain for 3 turns. Meanwhile, Heavenly Demon's Gaze acts as her main source of damage boost, increasing her attack while also reducing the enemies’ defense on top of applying Ignore Invincible and Guts on Musashi herself, all for a ‘paltry’ cost of 5000 HP. Rounding up her skillset is Accel Turn, which provides a 1-hit Evasion and increases Musashi’s Critical Damage for 1 turn.

Even with Evasion and Guts in her repertoire, the Berserker class’s defensive weakness remains a problem for a Musashi, especially when Heavenly Demon's Gaze’s demerit is considered. Her other great weakness is that her main damage boosting skill includes a Defense debuff component, forcing in a dilemma where using it early in the fight means forgoing the Defense debuff for the last enemy wave, while using it in the final wave conversely reduces her damage in the preceding waves.

Musashi does have some glaring weaknesses, which can make her feel rather unremarkable at release. Fortunately, the release of a certain Arts support brings her strengths to the forefront, at which point she becomes one of the most valuable damage dealers available in the game.

Arts damage dealers are well-known for their high amount of NP refund, and it is this strength which Musashi taps into with the help of Fifth Zenith’s NP Gain Up (as well as, presumably, that of her supports’ Arts Performance buffs). The skill also massively improves the NP gain of her normal Arts cards thanks to the doubling of their hit counts, allowing Musashi to easily fill up her NP gauge when given the opportunity.

Musashi’s high ATK stat and 1.1x damage modifier are already great boons, but the 1.5x nearly-universal Berserker offensive advantage is what sets her apart from other Arts competitors. Being able to deal consistently high damage to all sorts of enemies is a very valuable trait for a farming Servant to have, especially as her only weaknesses (namely, Foreigners, and to a lesser extent Shielders) almost never appear in farming stages.

Despite coming equipped with various survival-oriented tools (from Evasion to Guts and even Critical Rate Down on her NP), Musashi remains a very squishy Servant, courtesy of her low HP stat and the massive HP demerit from her third skill. Fortunately, her tendency to wipe out enemy waves in one fell swoop means that her defensive measures should generally be enough to let her survive through most farming stages.

Musashi’s third skill is the only means with which she is able to buff her NP damage, but the fact that the skill has a Defense debuff component creates a difficult situation. Using it early on means that the final wave of enemies will not be affected by the Defense debuff, but on the other hand, saving the skill for the last wave reduces her NP damage in the first two waves, which can result in reduced Overkill… which in turn creates a potentially loop-breaking decrease in NP refund.

It’s highly recommended to max out Musashi’s second and third skills in order to increase her overall farming coverage and reliability. Her first skill, meanwhile, can be left at a lower level unless she is to be used in more difficult fights.

Lacking an NP Charge skill, Kaleidoscope (MLB) is Musashi’s best option at release. Other Starting NP Gauge Craft Essences are naturally her second best, with a preference towards Arts Performance Up, NP Damage Up and Attack Up as secondary offensive effects.

"Miyamoto Musashi? That fool died of hunger! The woman before you now is just a normal girl who loves the clear blue sky! Can't you tell from my very American fashion sense? Yay! You can call me Miyamoto Iori, the yojimbo who brought all her favorite weapons to enjoy summer to the fullest!"

Trading katana for foam swords, among other weapons, Berserker Niten Ichiryu has arrived! As you can see, the famed swordmaster has succumbed to the allure of swimsuits as well. What do you expect? It's summer!

Height/Weight: 167cm, 46.5kg
Origin: History
Region: The strange Lostbelt
Alignment: Chaotic-Good
Gender: Female
"Eh? I lost weight even though I'm a Servant!? Ahahaha! That's nonsense! Well, I may have worked out a bit to prepare for swimsuit season..."

A female swordmaster who is bright, cheerful, and dignified. All-in-all, she's vibrant. In other words, she's the usual Musashi. Yet, the allure of summer managed to infect even Musashi, making her even more of the above than usual. She loves anything fun. She loves jet skiing. And, of course, she loves to fight strong opponents!

"This time around, I'm going with a Western-style swordswoman look I always dreamed of pulling off to live a free-spirited yojinbou life!"
...At least, she says that with a bright smile on face.

The weapon she holds is a foam sword, made for safety, yet it still hurts for some reason.
When she's in her third Ascension form, she pulls out a longsword called the Reverse Destructive Sword, Musashi's Make.
It's based on the wooden sword said to be used by the Musashi from Proper Human History, but it wasn't made well, and it was damaged at the time of completion. However, she still uses the broken blades as both a long and short sword.

Magic Resistance: C
As she turned into a Berserker who swiftly and skillfully slices through various evils, its rank has gone down.

Riding Skill: D
She rides her jet ski to head off to Ganryu-jima. She doesn't think there's an issue with Musashi being like that.

Divinity: D
"Musashi...are you eating the food offerings from the altar?"
"Ehehehe..." (An embarrassed laugh that exposes her staggering stupidity).

Mystic Sword Counter, Incoming!
The fantastical sword technique that Musashi, in her long life as a swordswoman, was said to have used only once.
As the recipient of the technique is no longer among the living, Musashi is the only person who knows what it looks like and what it does.
It's a special Spirit Origin that thoroughly insults, vilifies, and smashes up swordsmen who have fallen into evil ways, heresy, or demons.
If its to be renamed, it would be an Anti-Swordsman Anti-Swordmaster Grand Bounded Field, Ganryu-jima.
By becoming a Berserker, an intelligent yet fiendish killing method like transforming the island into an full fortress for swordsmen and luring them to the middle to ultimately destroy them all, island and all, is no longer executed.
Instead, five dynamic sword styles of earth, water, fire, wind, and sky call forth a large amount of seawater to create a water pillar and surround the enemy, turning into a soaring sword that splits the enemy using the water pillar.

Accel Turn: B
Swimsuit Ishtar's skill that's been copied visually.
Even though Ishtar was the victim of plagiarism, the only thing she could manage to say was "...she's a genius!"

Fifth Zenith: B
A skill like Fifth Force, but not. Upon closer inspection, the word "force" has turned into "zenith."
It's a free forming sword that can turn from a pair of swords or a single sword at will.

Heavenly Demon's Gaze: EX
The skill "Heavenly Eye" gone berserk.
Her own Spirit Origin goes berserk to the brink of collapse to gain an explosive ATK bonus. Upon execution, her "Heavenly Eye" is honed to the extreme to see through the enemy's various defenses to annihilate them.
Since it sees through every defense within visual range, it affects not just an individual but entire groups as well.

Musashi was wandering through North America.
She just so happened to get a hold of a Holy Grail from the Grand Canyon, and she tried to use it as a cookpot for shits and giggles. But the Buddhist nature she cultivated through training did not mesh well with the Holy Grail, which caused her Spirit Origin to split, turning into a demon, and going berserk on its own.
Musashi stepped back and tried to pretend she didn't see that happening, but she knew it would cause great catastrophe if demon Musashi remained on the loose. Feeling responsible, she decided to confide with the shady mage (Merlin) she befriended in the past.

...At least, Musashi never actually tells that story.
In order to conceal the fact that she is the mysterious demon that may lead the West to destruction, she tries desperately to act normally while hoping to get everything squared away without anyone being the wiser.
She doesn't want anyone learning of her mistake because, well, she doesn't want to "get scolded by Master. Teehee." She's not doing this because she feels bad, or because she wants to save face.

In Las Vegas, she appears as one of the Swordbeauties.
After battling Hokusai, she calls herself Miyamoto Iori. She continues to insist that she is not Musashi, and this is based on the fact that she feels she cannot call herself Musashi yet because she feels inexperienced, only on the level of her apprentice, Iori.