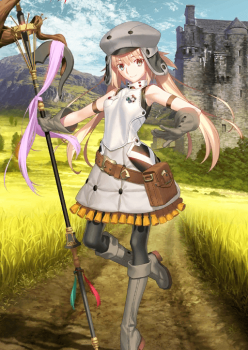 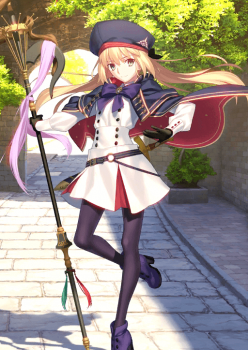 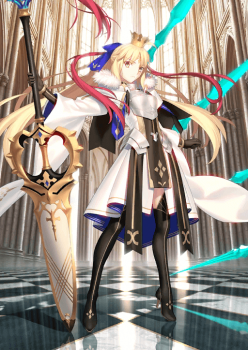 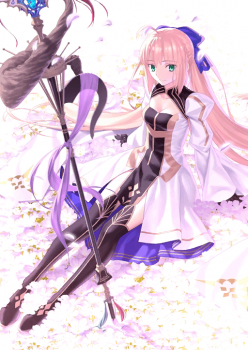 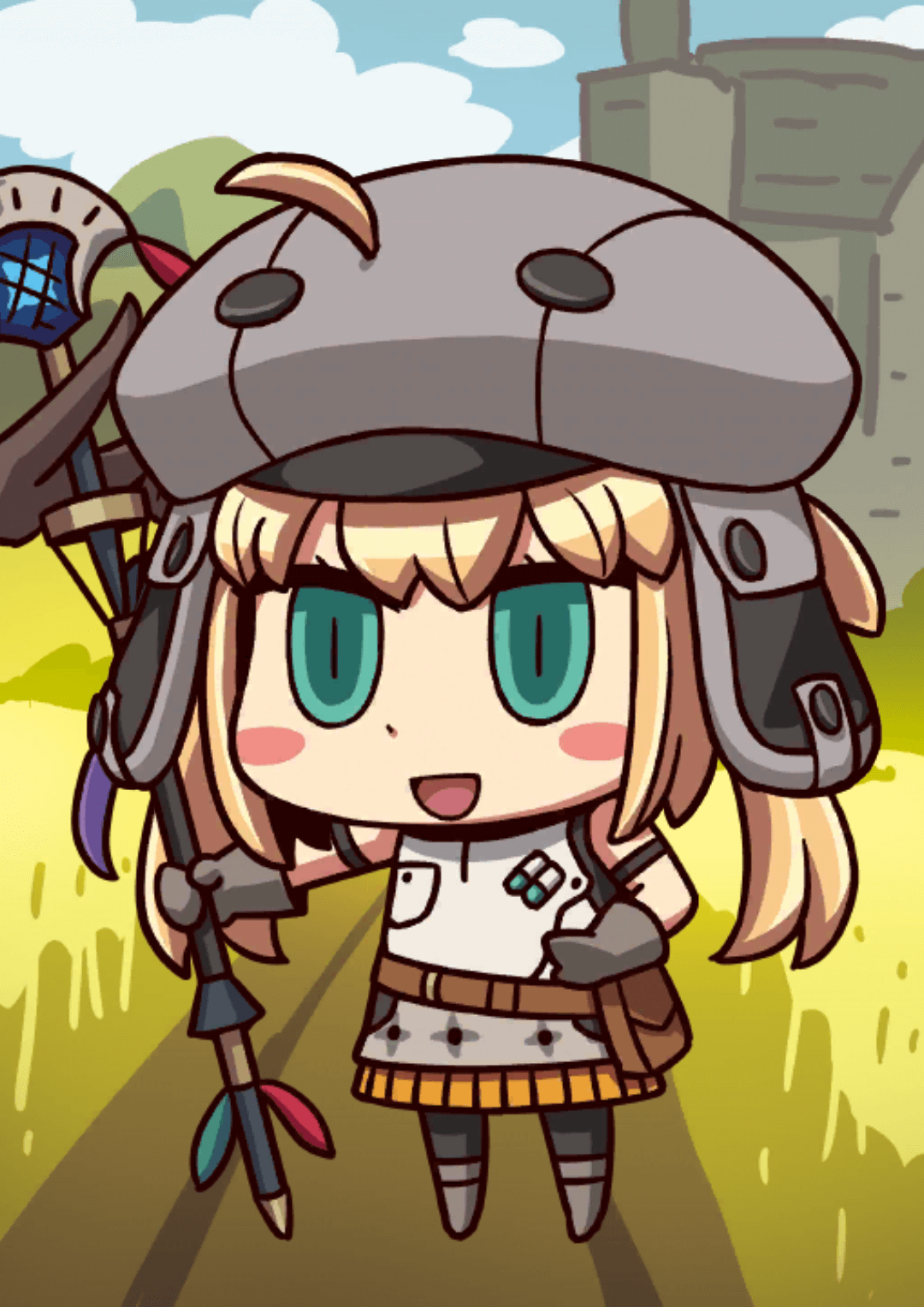 Humanoid Servant Female Arthur Saberface Knights of the Round Table

Charisma of Hope B

Protection of the Lake A

Increase your Critical Chance Resist by 20%

The Star of Hope

When equipped on Altria (Caster),
Increase all allies Attack & NP Generation by 10% while she is on the field.

“Because I'm just a normal village girl, that's why!”

The tolls of a bell resound from paradise, and the Child of Prophecy descends to bring hope to the world, especially Chaldea’s Arts-loving Masters. Indeed, it wouldn’t be an exaggeration to call Altria (Caster) a game changer. Bringing Arts NP looping consistency to an unprecedented level, her introduction heralds the dawn of a new era of farming. Ring the bells of destiny, for salvation is here at last!

Having NP Charge (up to 30% party-wide and 50% single-target) as well as a ridiculously high Arts NP Gain modifier, these alone would normally be enough to classify Altria (Caster) as a top-ranking Servant. The Child of Prophecy, however, also has incredible damage modifiers; pairing Sword of Selection’s Arts Performance Up with multiple Attack Up buffs from Charisma of Hope and her NP Around Caliburn, with additional supereffective damage against Threat to Humanity enemies. In addition, while Altria excels first and foremost at being an offensive support, she also boasts several powerful defensive tools. Most notable of these is Around Caliburn’s Enforcement Defense buff, which is essentially a multiple-hit, party-wide Invincible, with the added effect that it is unaffected by Ignore Invincible.

For all her strengths, Altria (Caster) isn’t omnipotent, as a couple of chinks can be found in her otherwise very impressive armor; namely, a lack of healing and Defense buffs. There is also the fact that she doesn’t provide any sort of Critical-oriented support, which can cause Arts compositions to somewhat struggle against higher-HP bosses. In a majority of cases, however, these weaknesses are more than made up for by the tools she does have, and even in the few situations where they become relevant, they can generally be solved by pairing her with a more specialized support ally.

All thing said, the Child of Prophecy definitely lives up to her title. Her support capabilities are such that she is effective even in non-Arts compositions, and in a proper Arts team her contribution just shoots through the roof. In fact, one doesn’t necessarily require a double-Altria (Caster) setup in order to perform a reliable 3-turn farming party, with the caveat that it has more limited CE options and may require the help of Chaldea Combat Uniform.

Altria (Caster) is special in that she provides the vaunted 50% single-target NP Charge threshold, while also offering both Arts Performance Up and NP Gain Up buffs. These two factors bring about the existence of parties capable of firing the damage dealer’s NP for three (in some cases, even four) successive turns without the involvement of a Starting NP CE. This in turn allows for damage-increasing CEs such as The Black Grail to be used on the damage dealer, greatly increasing the damage potential of Arts farming compositions.

While the massive support Altria (Caster) offers in terms of NP Gain/Charge is definitely her biggest strength, the combination of Charisma of Hope and Sword of Selection means that the damage increase she provides is also very competitive (her offensive buffs also scale very well with the aforementioned The Black Grail), and Altria can even add in a further Attack buff from her NP.

Around Caliburn’s Enforcement Defense is one of the best defensive buffs in the game, being unaffected by both Sure Hit as well as Ignore Invincible, leaving buff removal as the only thing it is vulnerable towards. Furthermore, it lasts for up to 3 turns, and can take up to 5 hits depending on Overcharge (1 hit per 100% Charge). In times of emergency, Altria (Caster) can also throw Sword of Selection’s 1-turn Invincible at an endangered ally, if at the cost of potentially wasting the Arts Performance buff. Rounding up Altria’s kit is her NP’s debuff removal, which is always an excellent tool to have in harder quests.

For all her various tools, Altria (Caster) notably lacks any sort of critical-related buff. To be perfectly clear, an Altria-supported damage dealer’s NP damage (especially with the Black Grail) is generally more than enough to oneshot the final wave of most farming stages; however, higher-HP bosses may cause some difficulties in minimum-turning a particular stage, as the composition’s damage output drops outside of the aforementioned NP.

Although Altria (Caster) does come with several powerful defensive tools, she lacks any sort of healing capability as well as Defense Up buffs. This situation may become relevant in more protracted fights, as while she can reliably prevent incoming NP damage, the limited uptime of Enforcement Defense leaves the party rather vulnerable towards stray critical hits as well as DoT effects (though she can hinder the latter thanks to her NP’s debuff removal). In these cases, Enforcement Defense’s 3-turn duration may also backfire, as an existing 1-hit Enforcement Defense buff would prevent a new (for example) 3-hit one from being applied.

It is recommended to max all three of Altria (Caster)’s skills as soon as possible, as all of them are necessary in order to fully experience what she has to offer. The leveling priority depends to some extent on the damage dealer to be used, though in general it’s better to focus on her second and third skills first.

Being a support Servant, Altria (Caster) is an excellent choice to put Bond Up CEs as well as Increase Drop Event CEs. Starting NP Gauge is also an option if her NP is needed, as well as Passive Star Generation for critical-oriented teams, and Taunt when she is used as a switch-in Servant.

Altria’s party-wide NP Charge (30% at max level) makes it a lot easier to access the NPs of support Servants including Altria herself, as a double Altria composition ends up with 60% NP Charge by using both Charisma of Hopes. The remaining 40% can generally be achieved by combination of the following: Starting NP CEs (preferably event CEs), Append Skill 2, a damage dealer or a third support with party-wide NP Charge, or even just good ol’ Arts chains. Also, it’s worth noting that Protection of the Lake’s NP Gain Up is party-wide, meaning that in the (admittedly somewhat unlikely) event where the damage dealer has a surplus of NP Charge, the skill can be used on Altria herself or another support for this purpose, with the damage dealer still gaining the benefit of the NP Gain Up. 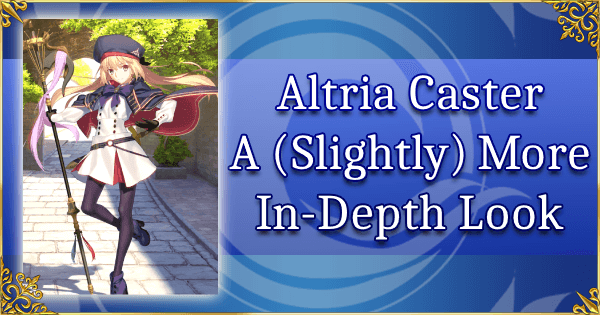 The child of prophecy, who was chosen along with the Staff of Selection. She appears a touch younger, looking as she did at the halfway point, right in the middle of her journey to reach Camelot.

"Yay, it's finally my turn to shine! Caster Altria will do the very best she can!"

An innocent, energetic, and ordinary girl who hates to lose, is strong enough to take a hit, values the importance of reading the room, and hides her true feelings from others. She is a practical researcher who spends her days studying magecraft in some truly animated fieldwork.

The Star of Hope That Embraces You.
Altria's mindscape is unleashed upon the physical world by the Staff of Selection. It is the tolling of the bell from paradise, and it both strengthens and protects all who fight alongside her...even if she herself does not know how it got its name...

Charisma of Hope: B
Having been raised as a prophesied child and later come to be depended upon by those around her, she has been endowed with charisma reflecting that burden of expectation. It works similarly to Merlin's own skill, rousing the fighting spirit of those in her company. It works almost like a dream.

Protection of the Lake: A
Protection by the fae of the lake. A blessing, or rather an oath given to the child of prophecy.

Sword of Selection: EX
A skill that represents her eventual fate, as someone who was chosen along with the Staff of Selection.

When Altria reaches third Ascension, she can use numerous treasured swords as catalysts for magecraft: Carnwennan the shadow-shrouder, Spumador the lightning, and Marmyadose the Mythological Mystic Code.
The giant staff wielded by third Ascension Altria was forged by the god of flame, and it is the great sword that was said to have been given to true heroes. In terms of raw strength, it exceeds even Excalibur, and it was said that King Arthur would sometimes loan out Excalibur to Gawain while he instead used this great sword.

Altria was summoned to Chaldea a tad earlier than expected. She and Master are more like friends who rely on each other rather than than a hero and the mage who accompanies them.

She looks upon the King of Knights Altria with wide-eyed amazement, she gets depressed when she sees the tyrannical Altria, and she stands in gleeful awe of the swimsuit Altria. That's the kind of girl this Altria is.

Upcoming GSSR Lucky Bag 2023 Summoning Campaign New Year Special targets?
Come New Years, NA will have a GSSR banners up: JP 2021, for reference As usual for…
Who are your 2023 (and 2024?) gacha targets?
As 2022 winds down, I’ve been looking ahead at future servants to understand how much…
Arts Reigns Supreme! - Interlude Campaign Part 15 Roll Thread
Interlude Campaign 15 has arrived, and with it we have 3 spectacular Arts Single…
Busti’s Stall Diary Chapter #572: Light & Darkness
One cannot live without the other. Light needs darkness as much as darkness needs…
Interlude Campaign: Part 15 Discussion
This is NOT the roll thread, so don’t post those here (but good luck for anyone…
Read More