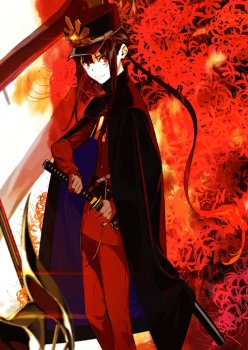 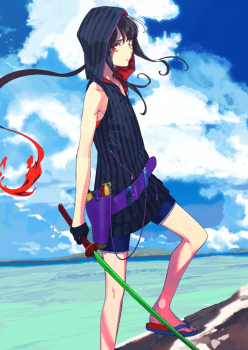 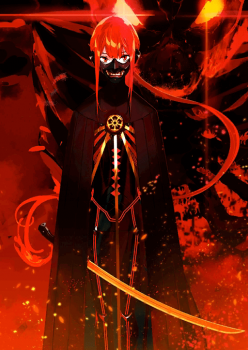 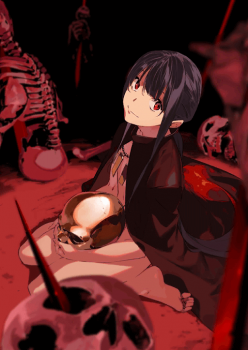 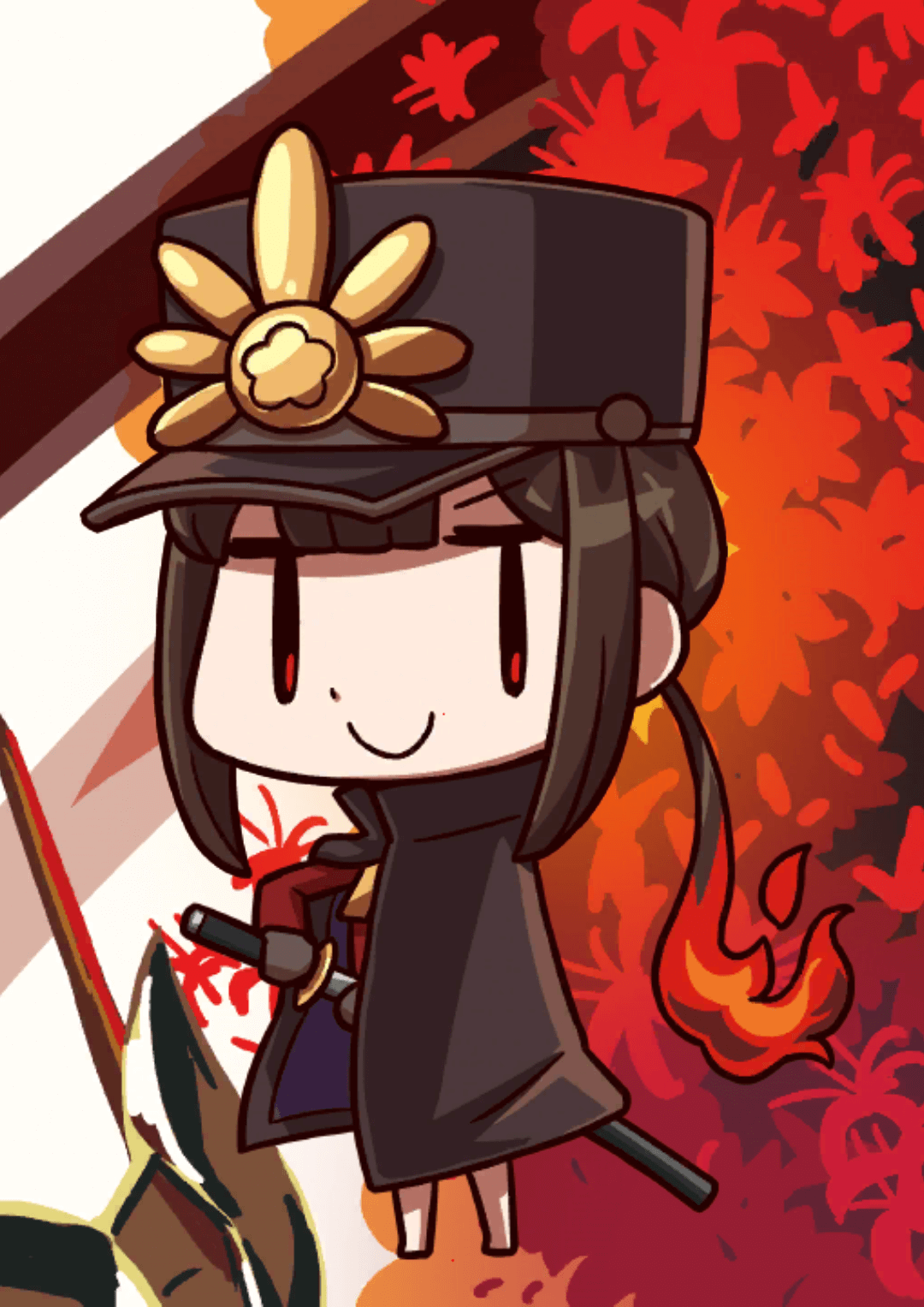 Self NP Gain when Attacked Up

I Shall Die for the Heavens B

Increase NP Gauge for all allies except self.
Increase Buster Card effectiveness of all [Nobunaga] allies by 20% (3 turns).
Apply Death to self (can trigger Guts). [Demerit]

When equipped on Oda Nobukatsu (892331),
grant Evade (2 times, 3 turns) to all Nobunaga allies except self.

The younger sibling of Oda Nobunaga (at least in FGO lore), Oda Nobukatsu is a special limited-time Servant available only in the Friend Summon pool. As a 1-star Archer with a supportive NP, he joins the roster as yet another bronze Archer capable of self sacrifice, with the ability to buff Nobunaga allies.

Oda Nobukatsu’s kit provides many utility effects, with Immature Scheme inflicting the Confusion debuff (which can Skill Seal every turn) and decreasing Buster Resist of a single target. He also has the ability to draw enemy attacks for a turn using Adabana of War, which also applies an on-death party heal effect and increased NP Gain when taking damage during that turn. His second skill, I Shall Die for the Heavens provides a small Crit Damage buff and stars per turn, while also notably providing additional buffs to Nobunaga allies, giving substantially increased Crit Damage and Star Gather Rate. His NP also provides Buster buffs to allies (further increased for Nobunaga allies), and charges NP Gauge for allies by 20%. Last but not least, he disappears himself after his NP.

Nobukatsu’s NP can essentially be treated as an Order Change with the next Servant in line, which comes with the bonus of NP Gauge and Buster buffs for allies. His NP unfortunately does no damage, however, making it purely supportive. His own Card damage output overall is not very notable, partially due to his lower bronze Servant base stats, although even then he ranks nearly the lowest in base ATK among all Servants, further making him suited only for support. It should be noted that he has no innate NP Charge skill, which can make it difficult to prepare his NP without the help of CEs or support that charge his NP for him. It is worth noting he can enable particularly interesting setups via the Order Change effect of his NP.

Overall, Oda Nobukatsu is a support Servant that synergizes particularly well with other Buster Servants (especially Nobunaga Servants). His ability to offer an Order Change via self sacrifice opens up new opportunities in various team compositions, and is a worthwhile Servant to have in the roster. Most importantly, if a Nobunaga’s around the Master’s Chaldea, make sure to roll for him so he can be reunited with his beloved sister.

Nobukatsu can provide 20% Crit Damage and 10% Buster Damage buffs to general allies, and for Nobunaga allies, this becomes a whopping +100% Crit Damage and +30% Buster Damage buff. He also provides a small amount of stars each turn, and for Nobunaga allies, can further buff their Star Gather rate substantially. He additionally can decrease Buster Resist for a single enemy, further boosting damage for one target.

His NP notably charges all allies’ Gauges by 20%, which is a remarkable amount for a Bronze Servant. Although there are demerits to this being tied to his NP (since it requires a turn), it is a useful supportive effect that any party member can benefit from.

His NP also acts as an Order Change effect, bringing in allies from the back line once he sacrifices himself. This can enable further buff stacking on a damage dealer of choice, or bring in additional NP Gauge support, which tend to be of great use for Buster Servants, who otherwise generally have little NP refund from their Noble Phantasms.

He provides all this at 3 cost, being a 1 star Bronze Servant.

Oda Nobukatsu ranks among the lowest in base ATK, so he should not be expected to be dealing much damage on his own using his Cards. His NP also does not deal damage, so he ends up being most effective by removing himself from the field after providing his various buffs to allies.

His NP is arguably the centerpiece of his kit, but he has no innate way to charge his NP Gauge (since his NP Gauge effect is tied to his NP itself, and does not give himself NP Gauge since he dies). As a result, he is best utilized with CEs or support that can provide the NP gauge he needs.

If an ally is not his big sister Nobunaga, they only get a small fraction of what he is capable of providing. He also generally favors Buster teams, and would find less use in any other lineup that features a Quick or Arts damage dealer.

Since Nobunaga’s primary usage is as a support, focusing on skills that maximize what he provides to the party would be ideal. None of his skills must be maxed for him to function, although leveling his first and second skills in particular do help improve the offensive support he provides.

Nobukatsu needs help filling his NP Gauge, so Starting NP Gauge CEs are particularly helpful for him. Aside from that, to help boost his supportive capacity, various supportive CEs that provide Buster Buffs to Allies, or On-Death effects work well on him.

Nobukatsu can also be used effectively with Arash (or two of him) to gain multiple Order Changes within the party (self killing Servants galore). Chaining Nobukatsu’s NP with Arash’s further boosts Stella’s damage as well, not only via the Buster buff, but also through Arash’s overcharge effect. If Arash is granted a Guts effect either via a CE or Support, he can unleash multiple NPs with the assistance of NP charge support enabled through the Order Change that Nobukatsu provides. A 2x Arash + 1x Nobukatsu team with an ally-targetable Guts (Quetzalcoatl, Nero Caster, Nightingale Santa, Romulus, among others) can get three Stellas off with a few NP Gauge support Servants available.

Normally he would never have been summonable as a Heroic Spirit, but for one reason or another, he managed to gain a Spirit Origin and manifest.

Unlike Nobunaga, who was nicknamed the Fool of Owari, Nobukatsu was known to be intelligent even in his youth, and his mother, Dota Gozen, adored him. It was believed that he would be the next head of the Oda family. Nobukatsu eventually came to believe that he was the true heir of the Oda family, so he rallied retainers who were loyal to him and rebelled against Nobunaga. However his twice-attempted rebellions both ended in failure, and Nobunaga eventually killed Nobukatsu.

He is Nobunaga's younger brother, nothing more and nothing less than that. That is the entirety of Oda Nobukatsu's existence.

Nobukatsu is a very social young man. He was also quite talented as a military commander, but because his sister is so incredibly remarkable, he has no proper perspective on his own abilities. Nobunaga is everything to him, and he resents the age of the warring states that failed to recognize his sister's talents, so took action by manipulating everyone in the household he deemed to be obstacles to his sister in a ploy to purge them, along with himself. Hypothetically speaking, had these siblings been born as commoners instead of into a daimyo family, they might have been able to live more harmoniously with each other.

As a side note, upon Nobukatsu's manifestation, those mysterious mini personas that probably came from taking a tiny fragment of Nobunaga's Spirit Origin (or whatever the hell they are) may also be summoned as an option for Nobukatsu. According to Nobukatsu, it's just a newer model, so trying to look for the differences between it and the older models may be a good way to kill some time.

Immature Scheme: D
During his life, Nobukatsu attempted two rebellions. He gathered all the dissatisfied members of his clan, but both rebellions ended in failure. In truth, this was all just meant to lay the groundwork to make a certain person into the Demon King.

I Shall Die for the Heavens: B
His fanatical devotion that leads him to offer his life to turn his sister into the Demon King.

Adabana of War: C
An adabana, a flower of the times that bears no fruit even after it blossoms. Whether Nobukatsu's life was futile or not is something only his sister Nobunaga would know.

Limited - Can only be summoned during certain events
Past Banners