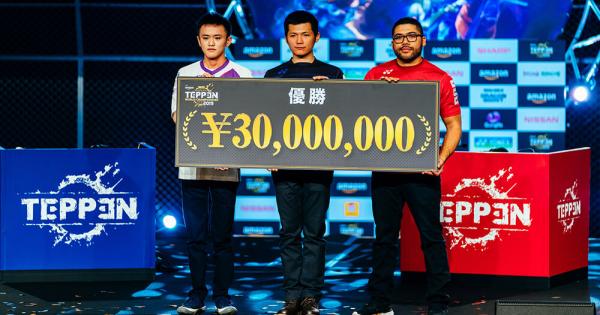 Huai - Yong “Last Guardian” Wu came out victorious in the TEPPEN World Championship 2019, featuring 12 of the strongest players from around the globe. His winnings include a total of 30,000,000 (~300k USD), a Nissan Skyline GT [V6 Turbo], AN-SS1, and one year’s worth of Dragon Boost energy drink and Kinoko no yama • Takenoko no sato (chocolate snacks).

TEPPEN, a real time strategy digital card game collaboration between Capcom and GungHo Online Entertainment, hosted their first World Championship in Tokyo, Japan on December 21, 2019. The tournament invited the 12 top players from around the globe to compete for a prize pool of ¥50,000,000 (~500K USD). The tournament was live broadcasted through YouTube and had an English broadcast on Twitch.

TEPPEN executive producers Ryozo Tsujimoto and Kazuki Morishita announce new TEPPEN content and World Championships 2020.  First is the new expansion reveal, The Force Seekers. Akuma from Street Fighter will make his debut as the next Hero for TEPPEN.  New cards will feature the new mechanic <Ascension>, while Evil Ryu as an extra skin.

Announced next, three methods to qualify for the TEPPEN World Championship 2020: Online tournament, offline tournament, and “Tour Points”. Full details is covered by GamePress in an article here.

TEPPEN first debuted at Anime Expo 2019. Since then, TEPPEN has reached over 4 million downloads worldwide in about 6 months. In October, TEPPEN hosted regional online tournaments that invited 3 top players each from North America, Europe, Asia Pacific, and Japan. These 12 players were invited to participate in the TEPPEN World Championship 2019 in Tokyo, Japan, with all expenses paid and a shot at the ¥50,000,000 prize pool.

I walked over to the World Championship 2019 venue, Tokyo International Forum, a multi-purpose exhibition center.

The World Championship 2019 was still an hour away from starting. TEPPEN fans formed a line in front of the room where the World Championship was being held. There were many staff on hand, getting inside was efficient, and goodie bags that included TEPPEN blow up LED sticks were handed to everyone walking inside.

The TEPPEN LED sticks were neat novelties given to fans. Fans tapped their LED sticks together cheering on the players and battles in the tournament.

I was sitting comfortably in a section amongst the crowd. Fans back home and anyone else tuning in were watching the event live on Twitch with the english broadcasting team. Japanese broadcasting was done on YouTube.

The seating area was the event was starting with a pre-show video on hulking monitors above the stage. TEPPEN community members appeared with testaments featuring their passion for TEPPEN. Esports introduction for each competitor oozed with personality. Before the matches began, I was cheering on each player.

The atmosphere on the grounds was electric. Bright lights illuminated a raised arena in the center of the room. An announcer with the intensity of a thunderstorm kept the energy in the room on the rise. It felt like a high-profile boxing match. You couldn’t help but feel like something big was about to happen. And with ¥50,000,000 on the line… all 12 players knew they had to be on top of their game.

Before the tournament, I had the chance of interviewing a couple players participating in the tournament at a reception party. I asked them what they would do with the prize money.

“I would use the money to buy expensive sushi,” said Tarakoman, one of the qualifiers from Japan.

“I would fuel my dream to monkey dash across the world, and buy a house,” said HarambeBae, one of the qualifiers from the United Kingdom. HarambeBae is a connoisseur of ape puns.

Unfortunately, those travel dreams would have to be put on hold. HarambeBae valiantly fought with his Rathalos beginning on a one game lead but went down from a reverse 2-0 sweep in his match against ADe, a player from Taiwan. Two of the North American qualifiers, Water and Yoyolon, also did not survive the first round. With these developments, the North American chance for victory on the World Finals stage lay solely on Ryuuzu’s shoulders.

In a post World Championship interview, I asked Ryuuzu about his strengths as a player. “I think I just have decent card game intuition due to my experience,” said Ryuuzu. “I've been competing in competitive card game tournaments longer than Hayakeo's been alive so that definitely helps.”

Hayakeo was another favorite going into the tournament. He’s a popular player from Japan, and what’s even more impressive is he’s 16 years old.

Ryuuzu’s first match is in round two, a reward for players that achieved first place in their respective qualifier regions. K4or, a player from Italy, faces Ryuuzu. Ryuuzu would have to shake all nerves, K4or was warmed up from the first round. In this epic match between two skilled players, Ryuuzu clutched the match with level-headed plays, denying K4or’s Ryu with a 2-0.

Ryuuzu’s next opponent was Last Guardian in the semi-finals. Cheers from the audience grew louder as Ryuuzu and Last Guardian sat down to play in their semi-finals match. Ryuuzu’s Jill Valentine and Last Guardian’s Morrigan Aensland entered the big screen, complete awe filled in everyones’ eyes, a never-before-seen battle background revealed at the tournament! A fitting backdrop, you could feel your heart racing as these titans clashed it out. After launching a devastating double resonate line up, Last Guardian advanced to the finals, sending Ryuuzu to fight for 3rd place.

Pitted against another, top Japanese National players Tarakoman and Taiga face to determine who would carry Japan in the finals. Back and forth wits and attrition showcase how close in skill these players are. Around every corner in seconds, favor in the match shifted to the other. Plays by Tarakoman and Taiga grew with intensity from neither players wanting to lose. Tarakoman and Taiga go to their last bit of health, stress was written all over Tarakoman’s face, Tarakoman refused to give up. With pride and life changing money on the line, Tarakoman uses that energy to clutch the match, sending Taiga to play against Ryuuzu for 3rd place.

Ryuuzu and Taiga immediately play their match to determine the 3rd place finalist. 3rd place receives ¥5,000,000 (~50k USD) and will have their name and region represent Top 3. This was the last chance for both players to seize the moment and etch their name in TEPPEN history. Ryuuzu watched Taiga and Tarakoman’s match and was prepared. Taiga would have to maintain great focus against Ryuuzu after just playing Tarakoman. Ryuuzu changes his lineup similar to Tarakoman’s one resonate deck and Jill Valentine strategy. Taiga selects the same decks he used for Tarakoman. This is Taiga’s second chance to defeat this lineup. Ryuuzu wittingly uses all the advantages keeping Taiga behind in their battles. Ryuuzu wins the set 2-0, North America cemented into top 3, excitement exploded in the crowd for the final 3rd place finish. In the interview after, Ryuuzu humbly praises Taiga in their well fought battle.

Almost 7 hours into the event, the long awaited finals between Last Guardian and Tarakoman unfold. Another completely new scenery welcomes these grand finalists.

The battle begins with the finalists selecting double resonate lineups. Resonate, a highly revered tournament deck for their lockdown playstyle and consistent damage. The crowd is in awe, anticipating the most intense clash of knowledge, skill, and strategy of the night. The grand finals stage could not have been more perfect showcasing the mirror match of the strongest tournament decks. Last Guardian and Tarakoman’s first game is Morrigan Aensland versus Morrigan Aensland. Last Guardian establishes the first threat on the board, placing him far ahead in the match up. Tarakoman quickly follows up with a threat of his own but has to continue being behind on health. Resonate decks have large amounts of utility cards, the match will be decided by best use of resources. Plays similar to one another follow, aggressive plays chip at both players’ health totals. Last Guardian wins the Morrigan mirror by maintaining his threats against Tarakoman. Last Guardian must win with Dante next to become the first TEPPEN World Champion.

What is TEPPEN? TEPPEN is a mobile digital card game that features Capcom characters and is a collaboration between Capcom and GungHo Online Entertainment. TEPPEN introduces a new genre, Ultimate Card Battle, combining digital card games with real time strategy. TEPPEN can be downloaded in the iOS, Android or the Amazon app store.