I told you I’d be back, and we got another treat for you. Today, we’re talking about the Canadian celebrity Albertosaurus. Albert came to us with Scorpius Rex as well as some other rares like Deinotherium, and when people swathe other rares, it was no contest who was the favorite among players. Heck, when Albert was in the wild, the tier list process almost was stopped because of how many people were getting as much as they could. So, is it as good as people think, or is it just another chomper? Let’s find out. 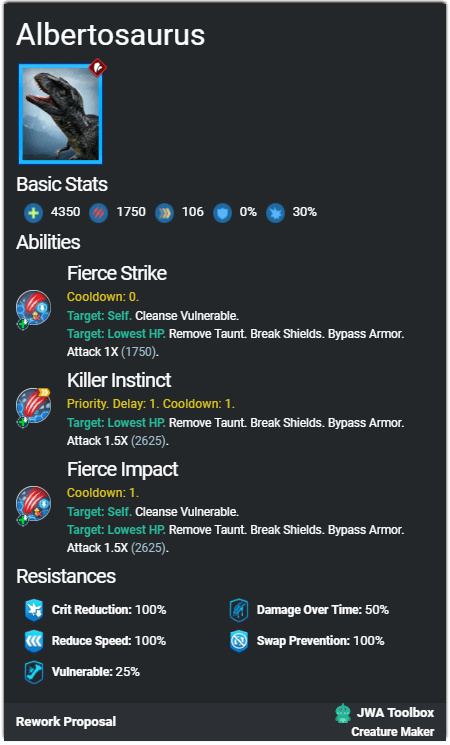 As per usual, we’ll start unboosted. So, looking at these stats, it’s no wonder why Albertosaurus is the best fierce nonhybrid in the game. Killer Instinct is a good move, but Albertosaurus is able to use it to dominate the competition. It can take out Trykosaurus, Diorajasaur, Mortem, Testacornibus, Thoradolosaur, and so on because of how much Killer Instinct is doing. And with a 30% critical hit stat, that number could rise beyond 2.0 Phorasaura levels with an added bonus of bypassing shields and armor. As for speed, Albertosaurus is surprisingly fast compared to others like it. It is faster than all big nonhybrid chompers like Allosaurus gen 2 and Tarbosaurus. This allows it to set up Killer Instinct better on a slower opponent like Diplodocus or T. Rex. And you thought Allosaurus gen 2 had resistances? Well, Albertosaurus has them too, and better ones at that. With pin immunity, creatures like the compies will never keep this guy down. And while people are complaining how some cunnings shouldn’t be resistant to resilient effects, Albertosaurus laughs while carrying an immunity to critical hit reduction to make sure that 30% is always in effect. This is one of the most solid nonhybrids around, but is it good in practice?

In the arena, Albertosaurus is one of the best rares to use at the end game, being a decent answer to Testacornibus. I asked IDGT about Albertosaurus, and while he said it is a good option, it has major flaws. First up, while it does have a great set of immunities, it lacks the most important resistance in the game: stun immunity. This makes it vulnerable to Monolorhino and Ceramagnus as well as Scorpius rex gen 3. That being said, a rare that can run with the big dogs is an amazing accomplishment.

However, being a rare, you’ll usually see Albertosaurus in a tournament. And let’s just start off by saying that Albertosaurus was probably the BEST fierce around, especially in the nonhybrid rare/epic events. When all rares and epics were on the table, Albertosaurus was able to keep up with the big guys like Sarcorixis and Thylacotator thanks to its decent bulk and great output with a priority impact. However, it did struggle a bit with Compsognathus dominating the scene and Woolly Rhino being able to swap in and kill it many times after a good hit. And again, that stun weakness is not doing it any favors with Woolly Rhino being such a common threat, and even Nasutoceratops was making some appearances. However, with Scutosaurus dominating and Albert able to somewhat work around with the compies due to its high damage and priority move, Albert was THE go-to fierce in the event. One of the biggest boons to Albertosaurus in these events was its pin immunity, allowing it to work around Compsognathus. The only thing that could really keep it on the field would be Titanoboa, but Titanoboa also gets 2-shot thanks to killer instinct. However, Albertosaurus was more of a one and done type of creature, as usually after a matchup it was left on such little hp and while it was fast for a big chomper, it was still quite slow and easy pickings for a Scutosaurus wanting to set up shields or an Ornithomimus looking to set up rampage and run. And again, its pin immunity comes in to save it from being pinned by Compsognathus and denying them to pick up a free kill. Now in rare skill tournaments, there is no Compsognathus. Taking away Compsognathus and Scutosaurus makes the meta shift dramatically, and while we have never had a rare event with Albertosaurus, we can speculate, and Albertosaurus will STILL be a top tier threat. The only guarenteed counter you have is Dilophosaurus, and it struggles with major issues involving speed. Compsognatus gen 2 isn't guaranteed, and Nasutoceratops and Dracorex aren't doing as much as Woolly Rhino. However, there will be 3 cunnings that are going to make big impacts in the meta: Ornithomimus, Archaeopteryx, and Compsognathus gen 2, and all can somewhat handle Albertosaurus, but they will like Albertosaurus keeping resilients like Elasmotherium at bay while they cause chaos. When it comes to boosted environments, I asked IDGT and Prominence from Kelliance about Albertosaurus in a boosted arena, and both came back with pretty much the same answer. Albertosaurus is still probably the best fierce you can get, but others rise up and give it competition. Prominence says Allosaurus gen 2 is not far behind, and T. Rex and Gorgosaurus at 142 speed are never fun to come across. However, with resilients being really strong in these environments, Albertosaurus will still have a huge role in any nonhybrid event it’s allowed in.

How do you use Albertosaurus in battle? Well, it can kind of be a bit of a gamble sometimes. If the opponent throws out something like diplodocus and you get it to 2600 before going down, throwing in Albertosaurus to just remove it is a good use of it, because then Killer Instinct is set up, and that has the potential to 1-shot many creatures allowed in these events like Ornithomimus and Erlikogamma. Other times it can be a decent lead to just punch a hole into your opponent’s team, especially if they lead something like Brachiosaurus, who was a common lead in the last skill tournament. You could also use Albertosaurus as a closer even, however this isn’t as good because that’s when Compsognathus loves to start swapping and rally healing. But no matter when you use it, Albertosaurus will never do nothing in a battle. It's always got something to offer.

At the end of the day, Albertosaurus is something that will be a common sight whenever it is allowed. It is able to use brute force to make it to the top of the nonhybrid events due to its amazing stats, moveset, and resistances. It can use all three of these traits to help overcome the rigid class system and take out almost anything in its path. You can tell Ludia, a Canada-based company, had a lot of fun making this monster rare.