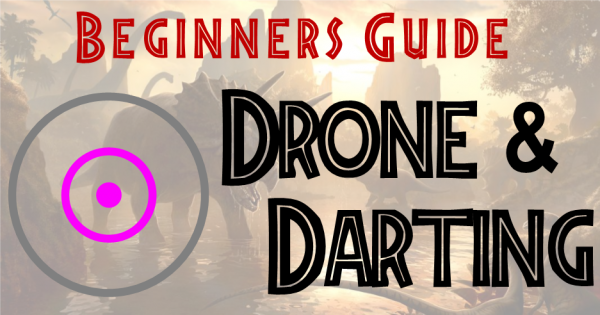 As a member of the Dinosaur Protection Group, we don’t capture Dinosaurs. We shoot them with darts to collect their DNA and we create our own versions of them in the lab from there. This beginners guide will help acquaint you with the basics of darting dinosaurs and what you can do to get the most out of darting! But before we get into that, let’s talk a few basics related to what you see on the map when you just started playing. 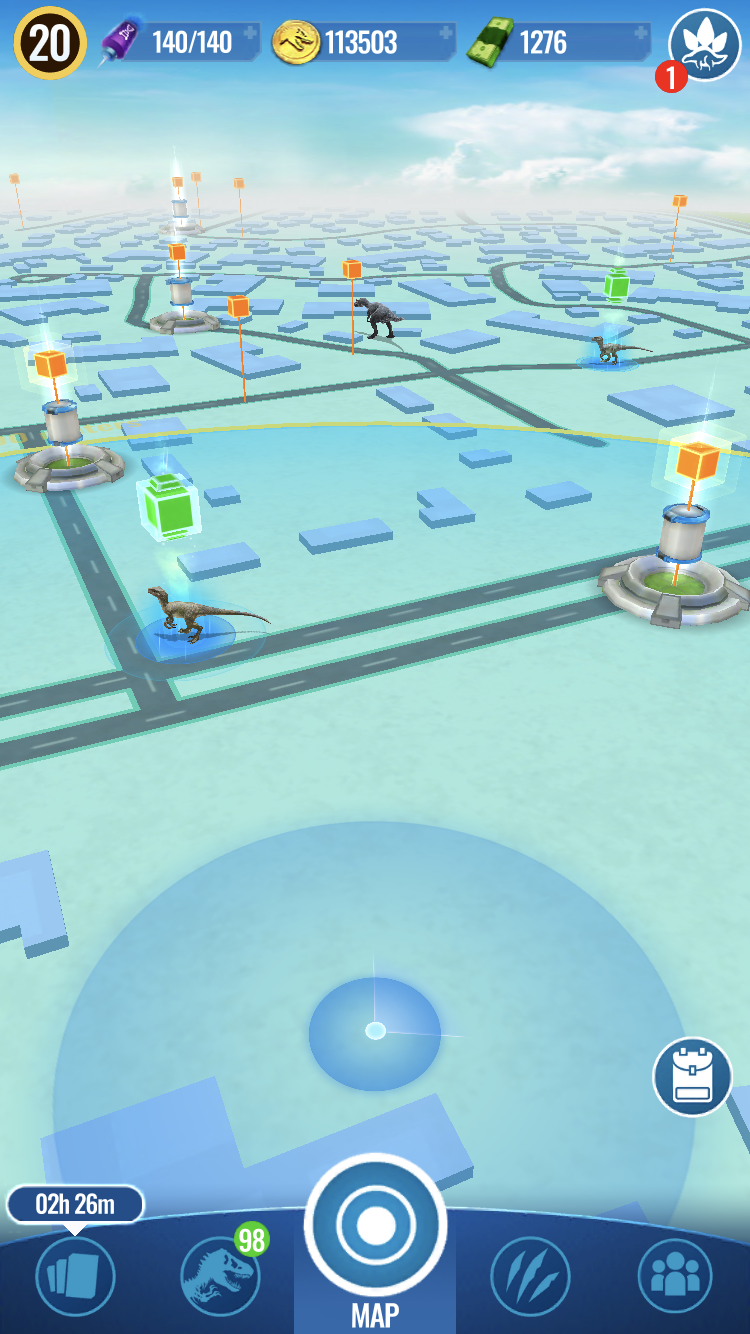 There are two colors of Supply Drops you’ll see on your map. The first is an orange colored regular Supply Drop. The second is a green colored “Park” supply drop. We call them park drops because they used to only be in parks, but now they are actually spread out across the whole map at about a 30% rate, with more like 70% park drops in parks (or green spaces on the map) instead of regular supply drops.

Each week Ludia has a special event where certain dinosaurs will appear under the Park Supply Drops. We will always keep you up to date on those special events. When you click on a Special Event Park Dino, you will see how many times you can dart that creature before you reach the maximum number of attempts. Once you dart it, it will disappear and you’ll be forced to find another creature, but the counter will have increased by one.

You’ll also notice sometimes there is more than one kind of Tyrannosaurus Rex or Dilophosaurus or Triceratops. These different creatures are often different rarities, and often the lower rarity (usually the Gen 2 version, but not always) has a weaker move pool and different hybrids can be created from it. We refer to these creatures as Gen 1 and Gen 2 for clarity, even though the names in game are Tyrannosaurus Rex and Tyrannosaurus Rex Gen 2. Let’s get into the darting! 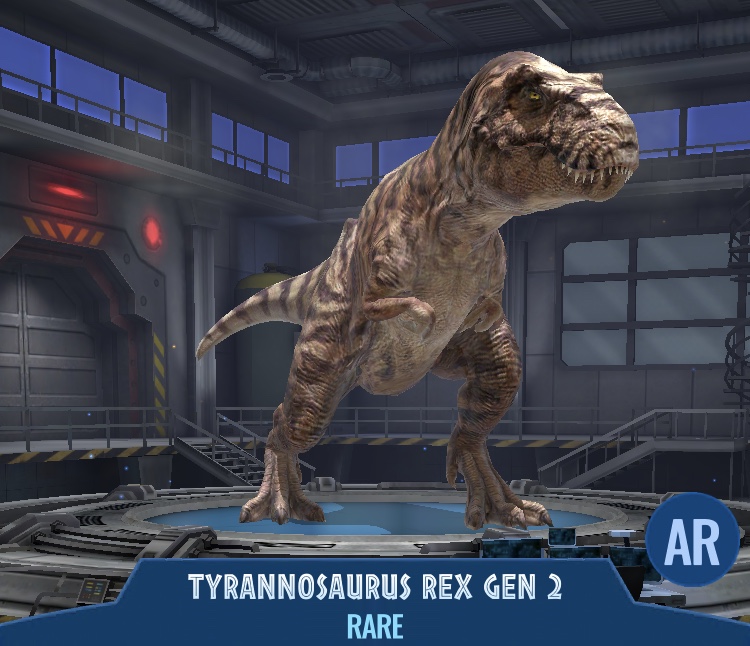 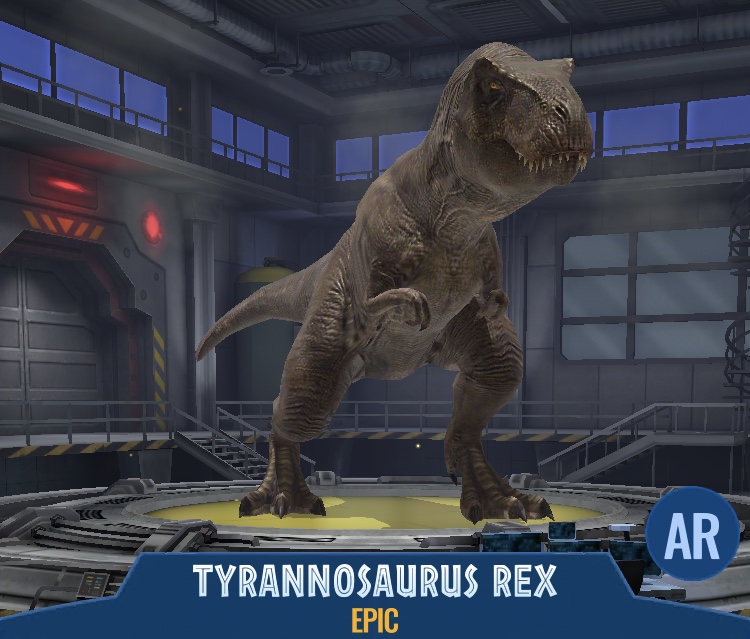 There’s a large 150 meter circle around your character at all times. This is the range you can use to begin a darting session. But the closer you are to the dinosaur you are darting, the longer battery life (more time) you will have to dart it. Generally speaking (without VIP membership) you should get approximately the following amount of time for each range.

With VIP membership, the time increases for near and far and you can launch the drone from the 150-200 meters distance as well. There also doesn’t appear to be any difference when you get closer than 30-50 meters in darting time so don’t feel like you need to be directly on top of any dinosaur.

Flying dinosaurs pose a challenge as well, because they are in the air and the distance measurement is how far you are from getting above the dinosaur. So some flying dinosaurs that are exceptionally high in the air may never allow you to get closer than 60 or 70 meters.

But the closer you are, the more time you get to dart.

Once you enter the drone sequence (by launching your drone), you’ll see the silhouette of the dinosaur you are darting. You’ll notice a targeted area on the dinosaur with a filled-in circle in the center. If you can hit this center spot, you’ll get the maximum DNA per dart based on your character level (like we talked about in the last guide). Tap and hold to move the drone, and let go to fire a dart.

You must hit the dinosaur in the target area to collect DNA, and the closer you hit it to the center filled in dot, the more DNA you will get. The timer starts when you fire your first dart, so don’t get too antsy. Here are a few tips to help you dart better:

· Hold your finger on the screen for that first dart for a few seconds, as the drone seems to zoom in a little bit, making the target area even bigger.

· Once you fire your first dart, the creature begins moving. Lead your shots by firing a little bit ahead of the dinosaur.

· Common dinosaurs have the biggest center target, and only alternate between two points on the body for each dart.

· Rare dinosaurs have three hit locations and a smaller center. They still seem to shift consistently from head to body to tail to body to head etc.

· Epic dinosaurs have four dart points that do NOT go in order, and very small centers. Take your time with your first shot to get that bullseye.

· Legendary and Unique dinosaurs are only available on rare occasions via special event supply drops. They do not spawn in the wild. Really take your time on that first shot and just do your best. They’re fast and very hard to dart well.

· Spend a lot of time learning how to dart common dinosaurs and get multiple bullseyes so you can get better rates on Rare’s and Epics.

· After you hit a creature a few times, it will speed up. Be ready to lead your shots by firing even further ahead when they speed up later to get those bullseyes.

Different types of dinosaurs have different running patterns. You’ll come to learn them over time as you dart more and more dinosaurs. Therapods (like our Tyrannosaurus Rex friend) can be some of the most difficult to dart as they seem to sway a bit back and forth with each giant step. Nodopatosaurus (an Epic Hybrid) is also extremely hard to dart. This massive sauropod will commonly get targeted from head to tail and leave you whirling your drone all over the enormous body to find the next darting point.

All in all, darting takes practice and time! And it takes a lot of darts too! We’ll talk about resources in our next guide. In the meantime, keep collecting that DNA!