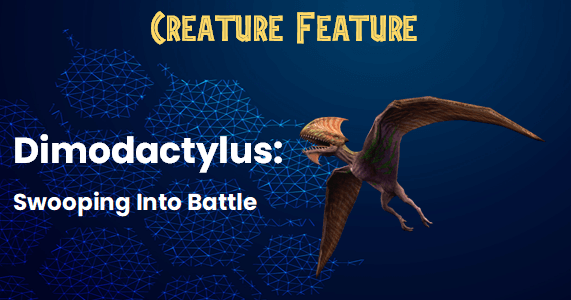 With every update comes a few hybrids and a few super hybrids, with the super hybrids consisting of hybrids from previous updates, and eventually most creatures get a super hybrid. Diplovenator eventually got Antarctovenator, Mammotherium got Mammolania about 2 patches later, and Phorusaura finally got a super hybrid after a few years of waiting in the form of the insane Phorurex. But yet, there are some that long for super hybrids. Alankylosaurus was one that could’ve received one if we voted on that, but whether or not our votes were really taken into account, the result was no super hybrid, but there’s another pterosaur hybrid that hasn’t been as fortunate, and it is the scary epic for this weekend. Swooping into our creature feature is the terrifying Dimodactylus. Has all this pent-up rage of not getting a super hybrid allowed it to compete in the meta?

Let’s take a look at Dimodactylus. Right off the bat, Dimodactylus doesn’t look all that impressive, and there is some truth to that. Poor hp, poor damage, and 126 speed doesn’t make for an amazing creature really. However, the moveset is what sets Dimodactylus apart from the crowd. Being a bleeder, damage is not too important, and that speed tier is beneficial as I’ll explain later. Let’s move onto the moveset. With a shattering strike, short defense, and impact and run, the moveset doesn’t look all that special. But then you look at the final move and most important move in its kit: cleansing swoop. This move allows it to run away turn 1, which is the only running move in the game to do so. Impact and run, while a lesser option, allows it to work around those creatures immune to bleed. And paired up with its pin immunity, Dimodactylus revolves around running. Short defense can also allow Dimodactylus to get an easy setup, allowing it to not be revenge killed as easily by a faster creature. And speaking of revenge kills, Dimodactylus has access to no escape, making sure that the bleed sticks. Now, Let’s go back to that speed tier. This is an interesting tier as most cunnings like Velosrhacos or Erlikogamma have some sort of bleed resistance. This is where the speed gets interesting. Dimodactylus is mediocre when paired by itself, but when paired up with creatures like Stegoceratops or Woolly Rhino, it becomes a much stronger creature. Those faster creatures may not get bled as much, but because they usually have lower hp, those cunnings will take a big hit and if they get stunned, you get a free turn in. And if you’re the faster one as Dimodactylus, you usually get a swap for free. Basically, you want to put a swapper like Megalotops at the end of a swoop for maximum effectiveness. However, Dimodactylus can even be taken a step further. Swappers are common. You got creatures like Megalotops, Woolly Rhino, and Argenteryx in the epic rarity alone. People will swap. That’s where Dimodactylus can be used. If you are good at predicting those swaps, Swap in Dimodactylus, pin them, and either swoop out or set up if the enemy is weak enough. And if the enemy has pin resistance when you both swap and go into something that is (or will be in this case) popular like Argenteryx, they’ll still get bled. And in the case of Argenteryx, which is undeniably a top 2 epic in the game, Dimodactylus’s bleed doesn’t trigger Argenteryx’s on escape to rally heal if both swap in at the same time, allowing it to wear it down much quicker. Believe me, getting rid of those darn rats with wings is key to an enjoyable battle. While Dimodactylus is not the best epic around and isn’t on par with something like Thylacotator or Brontolasmus, it still has a role that is pretty solid and not filled by any other epic.

When boosts come into play, it can always make or break a creature. Luckily I got fellow Dimodactylus enthusiast Mattylus from Enlightened Instinct to help me with this. I asked him a few questions about Dimodactylus and how it did in the meta as well as discuss my own insights as not many people use Dimodactylus.

What are the biggest strengths of Dimodactylus? How would you boost it?

Mattylus agreed with me that the most important aspects of the kit are the swap in and the swap out abilities as well as no escape keeping the opponent on the field and letting it bleed out. And if you are tied at 2-2 and your opponent is slower, has low hp, and wants to swap into a fresh creature, Dimodactylus can quickly turn the tables. It also has the ability to cause a draw in many scenarios, which, especially in a tournament setting, is much better than losing. As for boosts, it’s a pretty simple build: speed and hp. Dimodactylus rarely is going to be attacking directly, so focusing on these 2 stats is key. Mattylus says a good build would be something like 20/0/10 to allow Dimodactylus to stay alive and bleed as much as possible. The speed can be useful when setting up shields to either impact and run or to swoop away.

What is Dimodactylus's biggest weakness?

Again, it’s no surprise with its hands-off approach to battling, Dimodactylus really struggles against creatures immune to bleed. Creatures with multiple cleansing moves like Testacornibus will also be trouble for it, but then again not much can handle Testacornibus all that well so I don’t blame it. But if you have ways to cleanse bleed or are just immune to it, Dimodactylus isn’t going to get very far on you, but it will not go down swinging.  Also deceleration can give it trouble, because due to it being much frailer compared to something like Stygidaryx, a slowing attack from something like Scutosaurus could leave Dimodactylus in a really rough spot.

How well does Dimodactylus do in the current epic meta?

With Megalotops being one of the two best epics in the game while also having an on escape move and being able to cleanse bleed with a strike that has more abilities than cautious strike, Dimodactylus’s future doesn’t look that bright. Mattylus also brings up other creatures that can easily cleanse bleed like Compsognathus. However there is an epic that I discussed earlier that Dumodactylus does work well against: Argenteryx. However in this scenario, Dimodactylus wants to face it in almost a raw 1v1 with something behind it like Megalotops. That way it can swoop away after Argenteryx hits it, denying it to cleanse the bleed while not being able to rally heal because it isn’t in the threatened state yet. And if something like Megalotops is hiding behind it, anything is in for a rough time. However, Dimodactylus needs a team built around it to function, and with better and better epics coming into the mix, it is fading away.

Is Dimodactylus viable in the arena?

Dimodactylus isn’t the best in the arena. Monolorhino, Scorpius Rex gen 3, Phorurex, and so on all just step on it. However, it does have a few places here and there where it does well in lower arenas. Especially now with them losing their ability to slow creatures down, Mattylus brought to my attention that both Trykosaurus and Diorajasaur can easily fall victim to a huge chunk of damage from Dimodactylus. Grypolyth as well can suffer massive damage thanks to Dimodactylus resisting pin. But unfortunately, aside from these few instances, it doesn’t have what it takes to compete in upper arenas.

What future do you see for Dimodactylus?

Mattylus and I are both holding out for a future Dimodactylus hybrid. But odds are with the way things are going, Dimodactylus doesn’t look like it’ll be rising in the meta, especially with Ludia neglecting most of the lower rarity creatures like rares and epics. Mattylus thinks that it’ll remain a bleeder, but maybe some moves or stats changed up a bit like gaining lethal wound for impact and run. However, Dimodactylus is still going to have a unique role in the epic meta.

When it comes to using Dimodactylus, it actually can be used in many different scenarios. For starters, it can be used as a starter actually. However this is really best when something like a Stegoceratops or Megalotops is hiding behind it. If you don’t have a swap-in stunning creature behind Dimodactylus, don’t lead with it. Next up it can be used as a revenge killer. Set up a short defense and run into the next creature guaranteed. However, this really works best if something is hiding behind it like a Woolly Rhino. Then there’s the swapper. Dimodactylus can swap into many different scenarios. First up, stopping another creature from swapping, allowing yourself to apply the bleed while pinning them, thus wasting their turn. Next, you can swap in Dimodactylus in a 2-2 scenario where you can tank this coming hit and pick off that final creature. And finally, it can be used as a Kamikaze to get some bleed damage off and allow something like Scutosaurus to set up a shield or for a Majundaboa to set up ferocity, which can easily turn the tides of a match. So while it is a swapper, Dimodactylus can be used at almost any point in battle.

That’s Dimodactylus. Hopefully it gets the Phorusaura treatment and gets a hybrid one of these days. But this is still one of my favorite creatures to use being able to just prevent those pesky swappers. It’s a shame to see all these epics like Dimodactylus get phased out by these new epics. Hopefull one of these patches these creatures will get some love. I thank you all for reading and stay tuned for next week’s scary legendary and also be on the lookout for the new patch notes, which should be dropping soon. Well, make sure to dart those epics and I’ll see you next time.