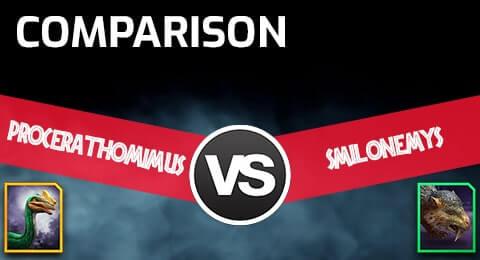 There's been a ton of excitement around our new sim results being included in the dinodex (seriously go check it out at the link below) and we've been getting more questions than ever about specific matches.

While we know our battle sim has some flaws (such as how it focuses on 1v1 matchups rather than 4v4, or how swap out moves don't really swap out the dino), there are often misconceptions about what we're actually simulating to "explain away" the results of the battle simulator.

For instance, we had a discussion on the forum the other day where a passionate player stated our sim was wrong because a) Trykosaurus vs Erlikospyx should always result in Erlik winning (actually the two should tie 97% of the time with best move order), and b) Procerathomimus should always beat Smilonemys.

This player is an incredibly smart member of one of our partnered alliances, and knows a great deal about strategy in one v one matchups, so we decided to dig into the sim results to find out why our sim thought otherwise.

(Warning: We're about to get numbers heavy here, so if you just wanna know what beats what, head to our dinodex and click on any dino to see the new counters feature and best against feature by hitting the link below) 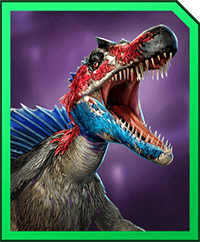 The common thinking for the Trykosaurus vs Erlikospyx matchup is to always Debilitating Distract on turn 1, and always Lethal Wound on turn 2. The reason for this is pretty simple. You can win "faster" by using Lethal Wound on Turn 1, but you take a massive hit from Defense Shattering Strike and it puts you in an uncomfortable position.

If you assume an instant move is coming, you can instead use Debilitating Distraction on turn two, but it won't kill Tryko. So if Tryko uses Defense Shattering Rampage instead of an instant move? You die.

So using Lethal Wound on Turn 1 results in a faster ending of the matchup, sure, but it puts you in a guessing game with Trykosaurus where choosing wrong means you lose. You essentially only have a 100% win rate with this move order if you always pick right. In reality, you've got a 50/50 win rate.

Instead, the prevailing move order is Debilitating Distraction, followed by Lethal Wound. And here's how Tryko can guarantee mutual destruction (if neither swaps).

This assumes no crits. Because DD has a 3 turn cooldown, and you can’t DD again on the last turn, Tryko can ensure it always ties with optimal moves from Erlikospyx and an opening of DD. And Spyx needs 2 crits (one on precise rampage and one on either lethal wound or debilitating distraction) and to use precise rampage on turn 4 to win 3% of the time without dying. If Spyx uses MSS turn 3 and Precise Rampage on T4, it still needs a crit to do enough (and needed a crit on T1 or T2) to pull of a win without death by counter.

My friends, this is what makes the battle simulator so cool. Who knew instant distracting that lethal wound would give you that sliver of health needed to ensure mutual destruction at a 97% rate.

But back to our friend, the Smilonemys vs Procerathomimus matchup.

The arguments given were three fold.

1) Procerathomimus has the tools (instant distract and evasive stance) to bait Smilonemys into the wrong move and force Smilo to lose.

3) Perhaps the simulator is choosing the wrong move order for Procerathomimus (not playing as smart as a player) and thus the result is skewed.

Interestingly enough, I can see why our friend believes Smilonemys should lose every matchup. But lets start with argument three. What exactly is the simulator simulating? 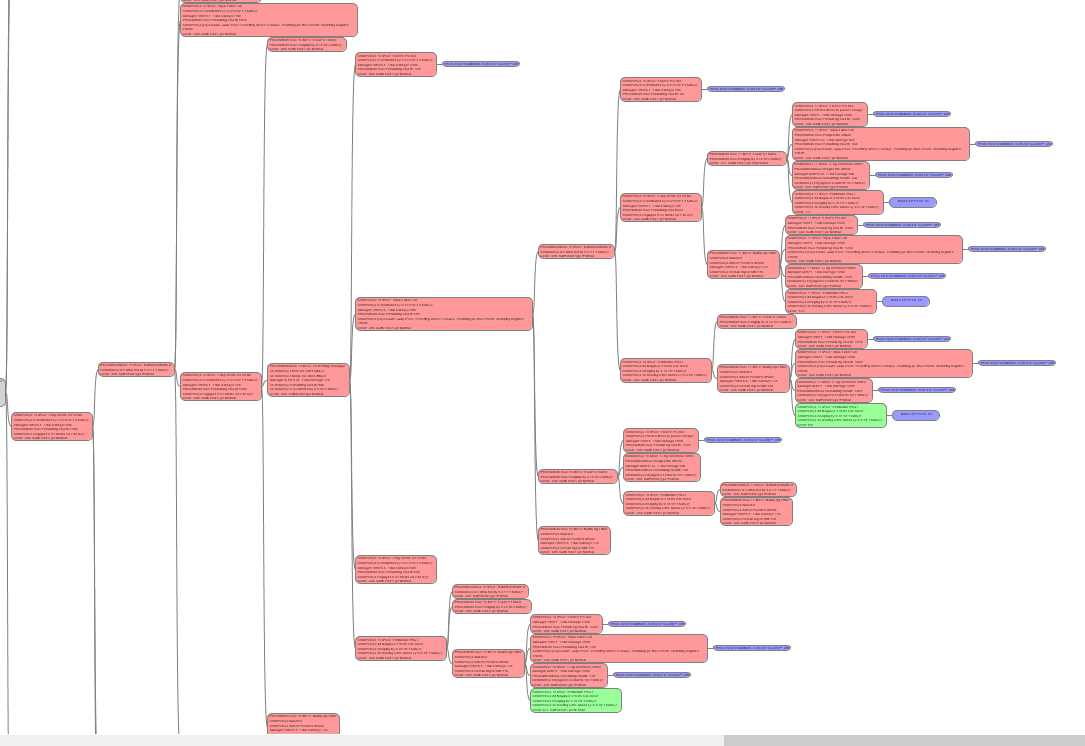 The above image is a mind map that shows you what exactly is going on with the battle simulator, and in this case it's showing you the matchup for Procerathomimus vs Smilonemys.

You see, the simulator actually isn't "choosing" anything. The simulator is running every single possible move order and move set (every tree and all its branches) and then analyzing the data afterwards to determine which "path" is best. I won't dig deep into this process of analysis (as it's one area we are still refining) but basically the sim runs every possible moveset, picks the winning moveset (best moveset for both parties) and determines a win/loss/tie result for that one match. Then it does it again. 40 more times.

And because the sim takes into account things that occur in real matchups (actually running the RNG for dodge, for crit, for stun etc) it ends up with different "winning" movesets.

In our image above, a red path indicates (in this case) a win for Smilonemys. A green path indicates a win for Procerathomimus. And in near every case with a lot of various move orders, Smil wins. In fact, in each green path, there's always ONE THING in common. Smilonemys uses Deliberate Prowl (randomly at the end of battles in the cases above which causes a loss).

Deliberate Prowl is an interesting move. It cleanses distraction, and potentially dodges damage.

One would think that versus an opponent who can distract twice like Procerathomimus, using DP would be a good way to clear any distraction AND set yourself up for a future dodge and a future heavy attack. But in every single case where Procerathomimus won this matchup, there was always one trend.

Let's look at this matchup in the simplest context possible. 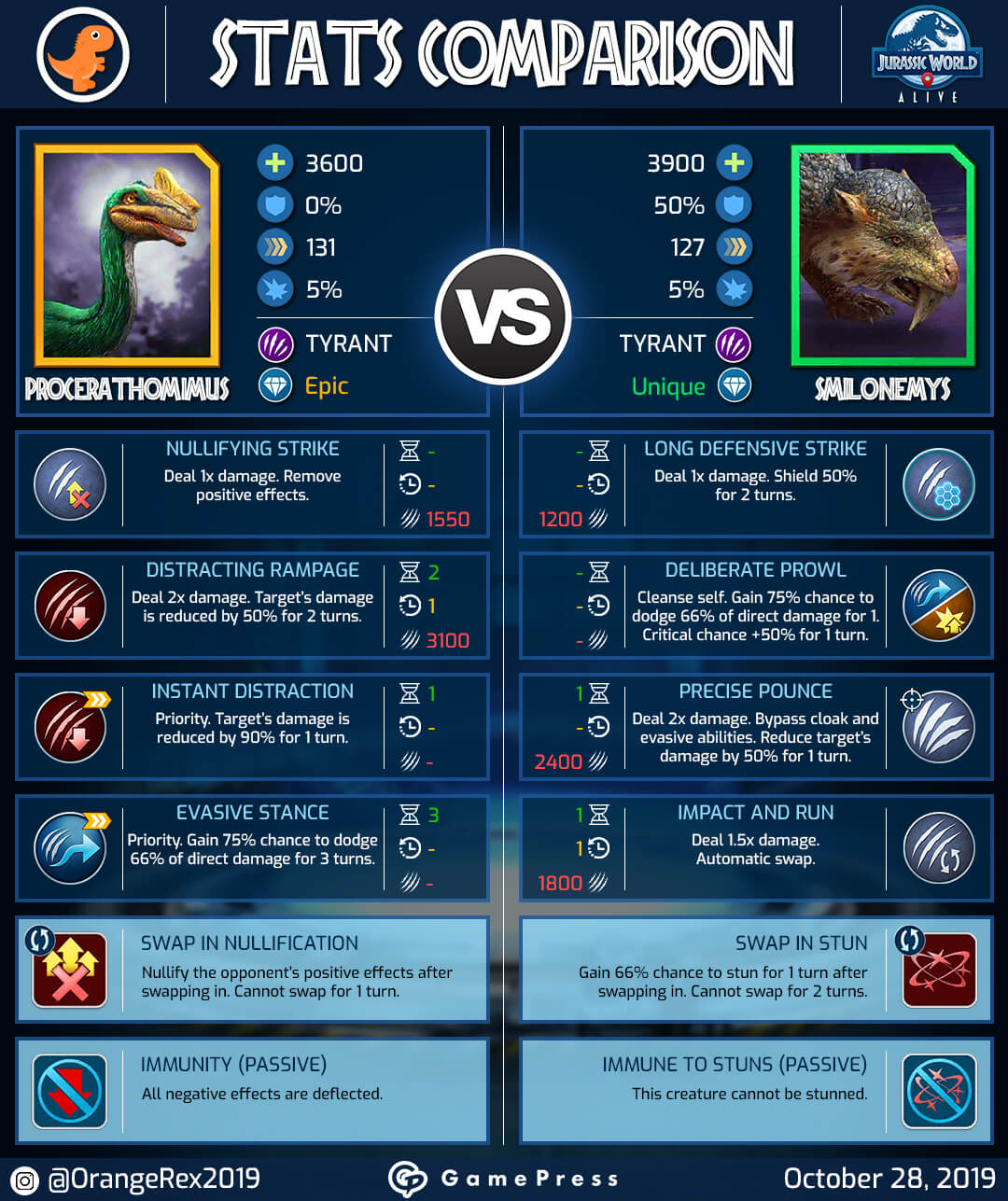 By comparison, Smilonemys has 3900 health and Procerathomimus does 1550 damage -- but that damage is always against 50% armor. So it actually only does 775 per 1x - and it needs a hair over 5x to win.

Both parties have a 2x move (though Smilonemys can do 2x more often with it instantly available on turn 1 and only a 1 turn cooldown versus Distracting Rampage which has a 1 turn delay and a 2 turn cooldown), and Procerathomimus can't be distracted but Smilonemys can. But in the simplest scenario, if the two parties just trade blows, Smil wins two moves before Procerathomimus.

So Procerathomimus can ONLY win by distracting or dodging - or by Smil doing no damage (aka using Deliberate Prowl).

Another interesting part of this equation is the fact that 2 of Procerathomimus's moves do zero damage. Instant distract and Evasive Stance both do zero damage, but simply distract and possibly delay. Hopefully you're starting to see what I'm saying here.

So if in every case that Smilonmenys loses, it always uses deliberate prowl, what happens if it doesn't? After all, assuming neither party is distracted, Procerathomimus needs 5x or more to win and Smilonemys only needs 3x. And even when distracted Smil can hit 3x before Procerathomimus can hit 5x because it can alternate 2x, 1x, 2x, 1x, 2x -- So by far Smilonemys can kill Procerathomimus faster. Because each delayed turn that distracts or evades simply means Smil gets a little more damage in and Procerathomimus still needs to do damage greater than 5x.

As it turns out, the surefire way to win the match for Smilonemys is quite simple. Just use Long Defensive Strike until the opponent uses Instant Distract. And then use Precise Pounce. Even at 50% (if you are distracted), you will still do 1x of your needed 3x to win. If not distracted, the opposing Procerathomimus is roasted anyways.

You see, by completely ignoring whether you are distracted or not distracted and focusing on simply chipping away at the opposing Procerathomimus, you are guaranteed a win for a few reasons.

2) Any turn Procerathomimus uses to evade or instant distract you is just a turn where you do some small amount of damage while keeping your shield up, which maintains your faster pace in a race to the finish line.

3) By ignoring your deliberate prowl, you never waste a turn by not doing damage and taking a hit and opening yourself up for a 2x hit that you can't give back.

So what happens if your opponent never uses Instant Distract?

Let's break it down to show you what I mean. Again, at any point in this tree, you could say "But wait, what if Procerathomimus evades? Or what if it Instant Distracts?"

Well what that will do is guarantee Smilonemys does some form of damage, while doing zero damage to Smilonemys, meaning it is now further ahead. And since Precise Pounce beats Evasive, using it guarantees at least a 1x hit (assuming you wait for Instant Distract to be blown first). So the moment ID is used, Smil gets to take a big bite out of Procerathomimus that further ensures it stays ahead.

In short, even when Smil does LESS damage than Procerathomimus, it STILL wins. There is zero chance Smil should be losing this battle. And the sim agrees (assuming smart play -- aka no Deliberate Prowl).

But what if Procerathomimus Evades turn 1? If it gets 3 dodges in, then Smilonemys only does 1188 damage in 3 turns.

You are correct. In the case of a very unfortunate string of dodges with an opening of Evasive, all you need to do is pick a random time for a Pounce. Even if the opponent Instant Distracts the pounce, you still have a shield up (which is the only other move you're using) which still guarantees a maximum of 775 damage per turn, and on that pounce you still get a sliver of damage when your opponent gets none.

By throwing in random pounces, and completely ignoring whether you're distracted, you force your opponent to guess when you are going to use it and if they ever guess wrong you win.

So even assuming insane luck (seriously i went VERY deep into these trees), Smilonemys still wins in every case that it doesn't use Deliberate Prowl. Because again, even when the opponent frustratingly has you distracted AND uses instant distract on a pounce resulting in zero damage? It actually doesn't put Procerathomimus ahead of the race. It simply keeps you both at zero damage for that turn.

The reason it feels like Smilonemys should lose this battle is because so many people in this battle use Deliberate Prowl and don't keep a shield up. But clearing distraction is a farce. All you need to do is land any damage when your opponent delays (with dodge or instant distract) and force the match to go on too long. Entropy is on the side of the one who has far less moves to land.

And you're guaranteed to start with more damage than your opponent because with ANY move at the start, Smilonemys using Long Defensive Strike will do more damage than Nullifying Strike, more than Evasive Stance (whether you hit or miss is irrelevant as you still give damage), and more than instant distract (which should always be followed up with a 1200 hit pounce or 2400 hit pounce).

The trick is never using Deliberate Prowl -- because that's the trap. Practically any other move combination results in a win. And keeping a shield up results in a forced win.