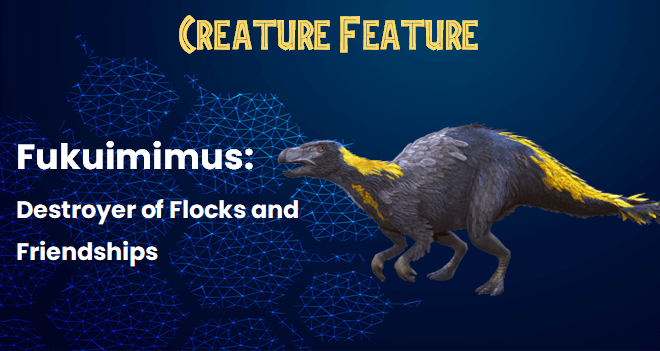 Hi there! Do you like legendaries? Do you live in Europe? Do you want to win battles and destroy friendships in the process? Well boy do I have the creature for you! Fukuimimus was the last of the continental legendary creatures, and boy did Ludia save the best for last. With a stally moveset and insane matchups, Fukuimimus can crush a team and any friendship with the person on the receiving end.

Let’s start off with the base stats. This legendary has high hp, good damage, and good speed. So just off the base stats alone, this legendary is already ahead of most in its rarity, but then comes the moveset, and oh boy does that moveset cause tears of pain. First up is group cleansing strike. Standard move.No different than something like Purutaurus. Next up is shelter, which was a new move that works like greater group heal, except it isn’t a group heal move but speeds you up by 30%, which is pretty crazy to begin with. The second move it has access to is a move found on no other creature: remedy. This priority move heals for x1.5, but also is a guaranteed dodge. See what I’m saying with a moveset that causes pain? Next up is the reason why this is the biggest flock killer in a legendary format: group cunning rampage. Unlike Troodaboa, who has a hard time reaching this move, Fukuimimus can easily get to turn 3 thanks to its healing moves. Thankfully this creature with solid base damage and 2 healing moves doesn’t have access to ferocity, thus allowing its healing moves to heal even more. Oh wait, it has a persistent counter, allowing it to increase its attack by 10% every time it gets hit. And to make things even better, it has swap in distraction, allowing it to swap in for free, get a counter off, and heal much more hp. Thankfully the resistances aren’t good to keep this thing in check. Oh wait, it has 4 really good resistances. Distraction immunity is a really good immunity to have, especially when you’re tasked with killing flocks. Stun resistance and pin resistance are also always a nice thing to get too, and while 50% deceleration resistance is really only good on creatures that have deceleration abilities, that 30% speed increase on shelter makes this resistance pretty good because when slowed, Fukuimimus still sits at 127 speed after the speedup. Critical hit reduction immunity is also pretty helpful with that 15% critical hit chance.

Boosts can make a creature or break them, and Fukuimimus is a whole new beast when boosts get involved. Thankfully I got Freedom919 from Apex Predators here to help me out. He brought this thing to the last legendary tournament and boy did it put in some work.

What is the best spread for Fukuimimus?

Fukuimimus relies on hp and attack to get the most out of its moveset, so something similar to Parasauthops, which normally runs a 10/20/0 build is probably best to maximize your healing and damage output. You are usually able to 1-shot most flocks with a rampage while also healing a lot thanks to that high boosted damage and the ferocity from the counter. This also allows it to take those big attacks from fierce creatures like Allosinosaurus. Speed isn’t needed as it already has deceleration resistance paired with a 30% speedup as well as a priority heal to regain speed control if necessary. Most of the creatures slowing it down are slower than 127 speed anyways.

What were Fukuimimus’s most important matchups?

Flocks. Fukuimimus is a great creature to use to destroy those pesky flocks. Sinokotaraptor and Coelhaast are very solid legendaries, but Fukuimimus can easily take care of them both, especially Coelhaast and its lack of distraction resistance. Freedom was telling me that he could swap in Fukuimimus in on Coelhaast and just go to town. And when Fukuimimus gets going, there isn’t much that can really stop this colorful snowball. Fukuimimus can also handle many fierce quite nicely. It can come in on creatures like Allosinosaurus, get a free counter off, and then go to town. And other popular non-flock cunnings like Indoraptor gen 2 and Phorusaura suffer the same fate. But its most important matchups involved keeping the flocks under its heel.

What were Fukuimimus’s worst matchups (and what creatures saved it from those matchups)?

Freedom said that he most struggled with Diplodocus, and this isn’t a surprise as Diplodocus has massive bulk, output, and can resist Fukuimimus’s distraction and remove its speed buffs and evasion while throwing up a shield which Fukuimimus doesn’t like. However, while Diplodocus is now incredibly strong, there were some creatures knocking about that could take advantage of Diplodocus. If Fukuimimus were to bait out a rampage and soak it up with remedy, then it could swap to Dimodactylus on a shield advantage and then let Diplodocus bleed out. My one alliancemate Selina fought another alliancemate of mine Gav123 and she was able to use Ankylodicurus to take down his Fukuimimus. So those creatures with high bulk are your best bets. Mammotherium was another decent option and a Freedom919 said even Enteloceros could cause some problems. However, these all can really struggle against other meta creatures. For example, Ankylodactylus can make short work of Enteloceros and Ankylodicurus is another creature that can be eaten away at by Dimodactylus. So whileFukuimimus did have a few counters, there were other creatures lurking about that could take down those few checks. And while not legal this time around, Ankylomoloch is another good check to Fukuimimus, but once again, creatures like Megistocurus and Dimodactylus could take advantage of this creature.

When it comes to using Fukuimimus, the best time to use it according to Freedom919 is to swap it in the moment a flock like Argenteryx or Coelhaast stepped foot on the field. Fukuimimus really wants to come in with that swap in distraction to take advantage of that counter attack it has. It then will just begin to slowly cycle to that rampage and then begin to go to town. Also, to get to that rampage sooner, Fukuimimus can also be used to set up on creatures to better access that rampage. It’s not a good idea to lead Fukuimimus as you want to make sure you remove those pesky tanks that put an end to your fun. Then when they are gone, Fukuimimus is basically unstoppable.

So that’s Fukuimimus. Overall one of the best legendaries out there and arguably the best in a legendary format. The language I’ve heard come out of the mouths of some people because of this are shocking but understandable as it can be a frustrating creature to kill. Also unfortunately this creature is locked behind Struthiomimus, which for those outside its continental zone is arguably the hardest epic DNA to come by. I thank you all for reading and see you next time.