Gorgotrebax: The Apex of Apexes 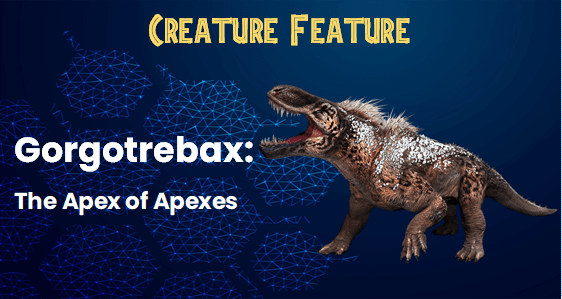 Almost a year ago, Gorgotrebax was unleashed as the first apex cunning. Known for having the hardest raid in the game with all its randomness and RNG, Gorgotrebax was also considered by most to be the weakest apex, with cunnings being heavily oppressed by the 2 resilient apexes. However, things change. New creatures are added and some older ones get changes for better or worse. But Gorgotrebax is not one of them, but seems to be rising in popularity. Is it because of the fact people are beginning to get it to level 30, or is it a force to be reckoned with? Let’s find out. 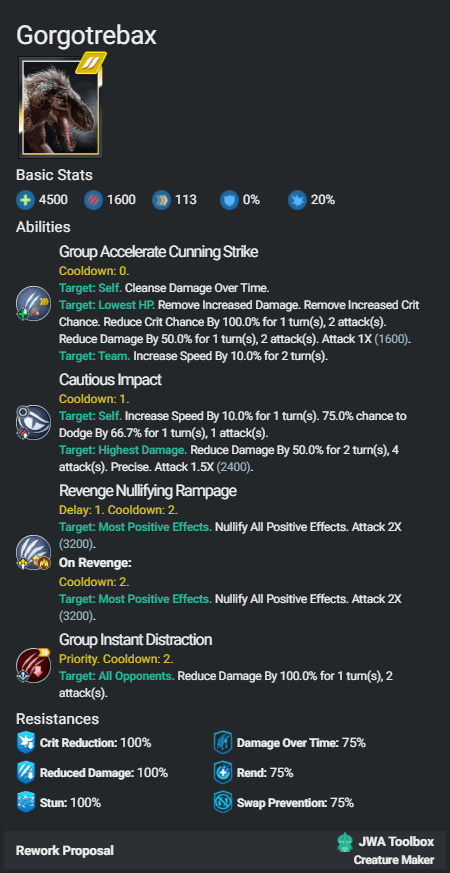 I’m going to lay it straight. Gorgotrebax is strong. Anyone who read the Indotaurus and Quetzorion article may remember that I mentioned Gorgotrebax a few times. This is because it is a great creature, with many considering it the best apex in the game. Why is that? Well, let’s start with the unboosted stats and abilities. Gorgotrebax has one of the most unique movesets in the game, with 3 of its 4 moves being found on no other creature and the last being found on only one. The base stats are pretty solid apart from the speed, which is still nothing to really sneeze at. And with the speedups Gorgotrebax has, that can change in an instant. Group accelerating cunning strike is a pretty solid move which, unlike the cautious moves, speeds it up for 2 turns rather than 1. Then you have cautious impact, which distracts you for 2 turns along with dodging and speeding you up for 1 turn. You have another distraction move with group instant distraction, allowing you to block a big hit or stall if you’re slowed for example. And finally, if you bring this guy in to revenge kill something, it has the unblockable revenge nullifying rampage, or unblockable 3200 as I like to call it. You also cannot distract it, as it is immune to distraction, as well as critical reduction and stuns, which is the best immunity in the game. And on top of that, it is 75% resistant to bleed, which can be cleansed anyways, rend, which is great for some top tiers, and pin, which is never bad to have. This allows it to be one of the best cunnings in the game, as well as potentially the best pure cunning around.

Boosts change the name of the game, and with more people getting Gorgotrebax to level 30, the more you’ll need to prepare for the possibility of coming face to face with it. I thankfully Have Freedom919 from Apex Predators and Castal from Bite Club

What is the best boost spread of Gorgotrebax?

When it comes to boosting, both players instantly threw speed on their Gorgotrebax. Castal went for 14 speed while Freedom went 16. Freedom mentions trying to outspeed Phorurex, which is a huge meta threat, and if you can outspeed Phorurex and get an instant distraction off on it, you can easily turn the tide of a battle. Castal also brings up Mortem Rex and wanting to outspeed it at all times, because Mortem gets ripped to bits by Gorgotrebax. Both players invested little in hp, with both players using less than 5 hp boosts, which is fair because Gorgotrebax has a bulky kit and wants to outspeed things while gitting hard, which is why both players heavily invested into speed and damage. And with that unblockable rampage on revenge, that high attack will hurt anything.

What is the biggest strength of Gorgotrebax in both its kit and the meta?

With many of the top meta threats relying on cunning fierce abilities, Gorgotrebax is here to ruin their days. Freedom brings up Indotaurus and Spinoconstrictor, which both get ripped to pieces by Gorgotrebax with its bleed and rend resistance. Phorurex’s rend is also resisted while Gorgotrebax can distract and dodge its attacks. Castal brings up Dracoceratops and Monolorhino who both can really struggle with Gorgotrebax with its rend resistance and stun and distraction immunities. Grypolyth is something commonly seen in the top raqnks, and it can’t do anything to Gorgotrebax. Geminititan is something many players are considering to use to take down Phorurex, but guess who takes down this sauropod? Gorgotrebax can even take down strong resilients like Geminititan as well as the scarier Scorpius Rex gen 3, which wants nothing to do with this apex. Other threats like Compsocaulus and the newly buffed Stygidaryx can struggle with this cunning beast.

What is the biggest weakness of Gorgotrebax?

Armored tanks. Thankfully for Gorgotrebax the 2 big resilient apexes are not much a threat in the meta anymore. However, there are 2 main resilients that are a pain in the side of Gorgotrebax: Testacornibus and Skoonasaurus. Freedom says you can just swap in either and win. Castal mentions the decelerating counter doesn’t help, and with a counter, cautious impact’s dodge is gone after the first hit, allowing Skoonasaurus to hit it with a rampage free of evasion. These 2 just absolutely destroy poor Gorgotrebax. And with no on escape, swappers can be a bit annoying for it (the ones without rend swaps), but that’s just for anything with no on escape. Other than those two big issues, there is nothing it really has to fear other than the occasional Hadros Lux.

With the other 3 apexes being unlocked, what future do you see for Gorgotrebax?

Many people are beginning to unlock the last 3 apexes with some just unlocking the final of the seven over the last 2 weeks, Gorgotrebax’s future is up for debate. Just kidding, the last 3 don’t stand much of a chance. Hydra Boa is the only one that many players see making a big impact on the meta, but it gets rinsed by Gorgotrebax, so it really doesn’t have much to fear. Right now Gorgotrebax sits in a meta that is incredibly weak to it with creatures like Scorpius Rex gen 3 and Spinoconstrictor unable to do much against it. Castal and Freedom said that right now, Gorgotrebax is doing just fine.

When it comes to using it in battle, there are a few times when you want to use it. However, most of those scenarios occur later in the battle. Castal uses it mid to late game to revenge kill anything injured and in range of that rampage. Castal especially brings up that if the opponent has a swappy playstyle, a Gorgotrabax saved near the end can easily 3-0 an opponent.Freedom also uses it as a closer to get rid of the pesky Scorpius Rex gen 3 or the usual injured Phorurex. And with high damage and speedups, this is the creature to use for sweeping those cunning and fierce creatures.

That’s Gorgotrebax. Right now, I would say it is the best apex by quite a bit while also being one of the best creatures in the game. It has everything a sweeper wants while also being somewhat tanky. Testacornibus and Skoonasaurus are issues for it, but no creature is immune from all threats. Despite the raid being a pain in the rear, the result is well worth the effort and time. Thank you all for reading and stay tuned for next weekend’s Thanksgiving theme. Good luck tomorrow and don’t forget to dart your epics tomorrow. Happy Playing!