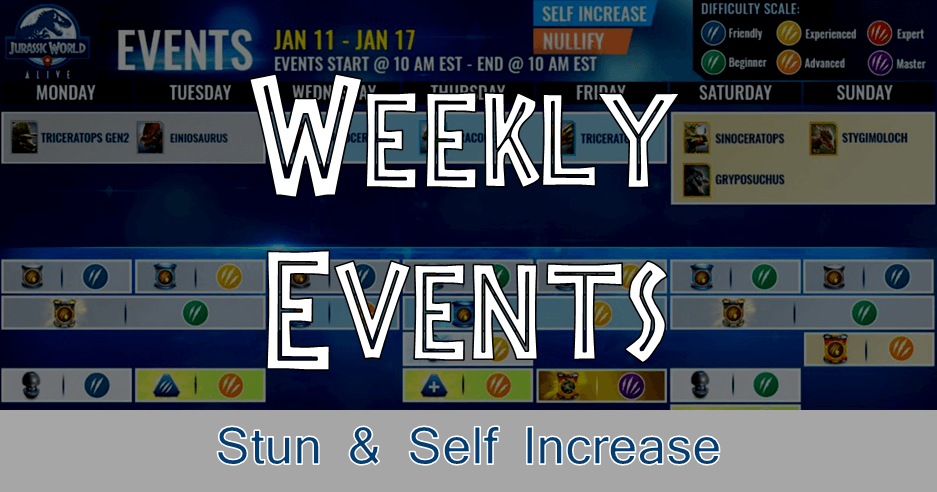 Explorers! This week comes with a text error on the image, but we are looking at Stun & Self Increase as the theme. This is going to be another fun week to collect DNA of your favorite stunners. Each set provides some great options, so let's go over what our Discord community is thinking and what we'll recommend to dart as well as everything else you need to know!

So what are the people saying? The majority of voters are targeting Tri2 this coming week. We can understand why, as Dracoceratops has stormed back in to relevance. As DC also has a hybrid (known as DCPro), you will need a plethora of Tri2 DNA to complete both if that is in your goals.

There isn't an absolute reason not to invest your attempts on Einio. Its hybrid, Einiasuchus, is solid and can hold its own in lower arenas as well as qualifying tournaments. You will also need Einiasuchus to create & build tourney darling, Sarcorixis. As Einio is less available than Tri2, we wouldn't try to stop you from making this your choice.

It will be no surprise that we will not be giving Tri as our recommendation for this week. However, if your goals have this as your preference, we fully support that. Here we have a very tough decision, and our Discord community is fairly split over Draco & Nasuto. Of course with both being event exclusive, it's easy to understand why.

We lean ever so slightly toward Draco, as the base alone can be formidable in the arena and of course also qualifying tournaments. Some very high achieving players use this little green monster on their teams with great success. However, we can understand if you may prefer otherwise, as we will be receiving Draco DNA during this month's Alliance Championships (both in the Exclusive DNA tournament & the final AC rewards). Draco has also been around longer and was once available as a Local 2 spawn.

All that said, if you prefer Nasuto, we say get down with your bad self! Nasuto has always been event exclusive and therefore some of the toughest DNA to come by. We did have this as a reward back in the very first ACs, but that was about forever ago at this point. You will need a lot of Nasuto if Carboceratops and/or Testacornibus are in your long term plans.

None of these three truly stand out in our opinion, though Grypo has a fairly commanding lead over Sino & Stygi according to our community. With Grypolyth one of the strongest dinos in the game, we completely agree with this as a choice. Grypo also feeds a second hybrid, Grylenken, which could one day receive its own super hybrid.

But don't let this sway you from considering Sino, especially if you are newer to the game. Sino will ultimately bring you Thoradolosaur, another which has recently stormed back in to arena relevance. Sino also is a component of Utarinex, and its two hybrids can perform very well on their own. As with Draco, we will be receiving Sino DNA in both the DNA Tournament & final AC rewards. Being confined to a local also makes this one less accessible than Grypo.

And then we have Stygi, also not a bad choice by any means. its super hybrid, Tuoramoloch, is perhaps the most import raid creature we have. A high attack Tuora can also be a pain in battle, especially if you don't have enough attack to keep up with the heals. If you are looking to add and level helpful raid options within your alliance & friends, then we can understand why Stygi would be your choice here.

Strike Events are Self Increase Themed. Here is a list of what can be rewarded upon successful completion:

Trials are also Stun themed and will reward the same creatures featured at the event drops.

On Friday, we have another Epic Strike featuring event exclusive Blue. Over the Weekend, we'll also get an Epic Trial. On Sunday we have an Epic Fast Strike. Finally, we've got the regularly scheduled Boost Strikes on Tuesday (Attack), Thursday (HP), and Saturday (Speed).

The Themed Scent of this week appears to be Medium Therapod Scent. This scent can draw any of the following creatures:

The treasure chase continues on Saturday &  Sunday. As of 1/10, we are once again able to chase the treasures through the day! With this set up, the chests are refreshed throughout the day and offer up to 25,000 free coins.

This Week begins the Inostherium pursuit, so keep your eyes out for common Inostrancevia!

Stun week come with some opportunity at exclusive DNA as well as other great options. New for 2021, we are going to reach out for more community input on these weekly event roundups. Join our Discord Server and let us know what you're darting and why! We look forward to your input and hope to see you on there!