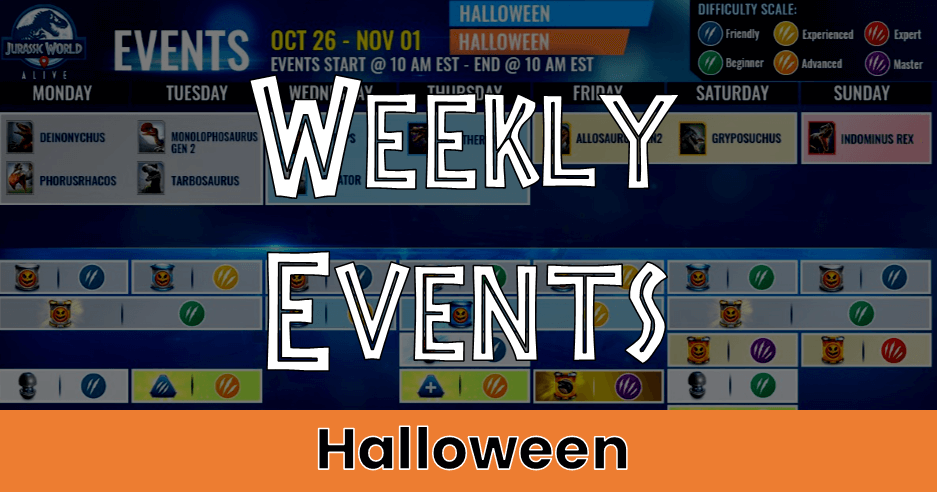 Explorers! This Weekly Event feature celebrates Halloween! The community voted recently, and the results are awesome! Each set provides some great options, so let's go over what we recommend to dart as well as everything else you need to know! 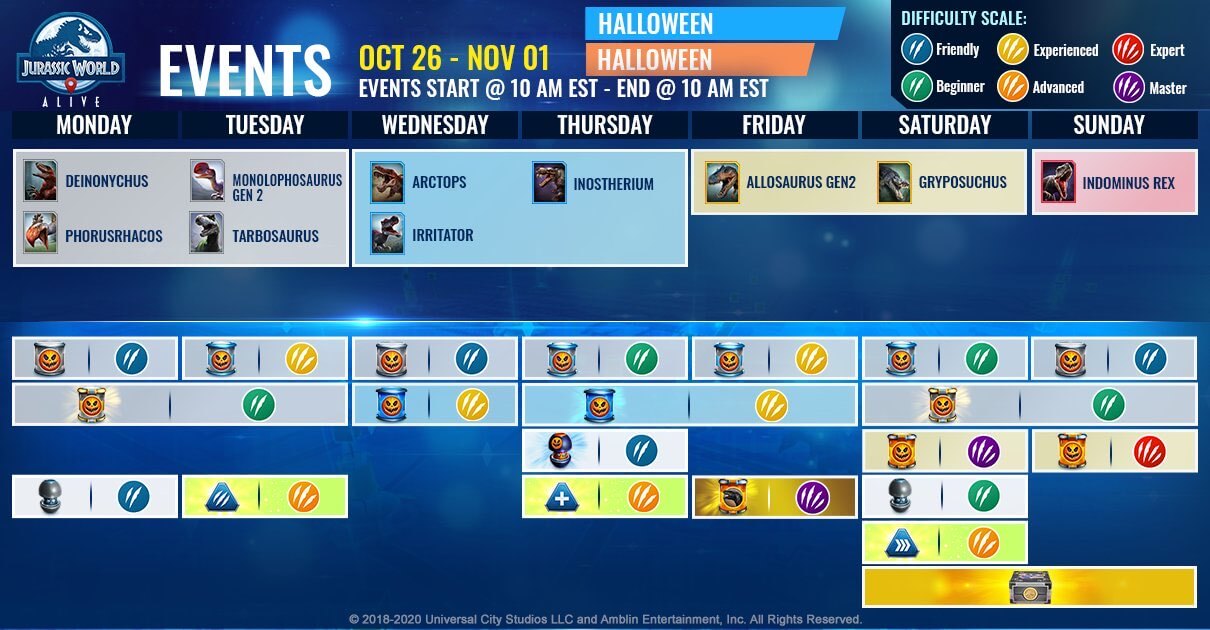 The Commons for this week are solid with Mono2 leading the recommendation's way. Unique Monolorhino is a top notch foe, and you're going to need a ton of Mono2 at 500/fuse for the base, Monolometrodon. Also known as "Budget" for being a cheap version of Magnapyritor, Monolometrodon has been spotted on many arena teams since 2.0, and you may want to build one of your own.

We find the second best choice to be Phorusrhacos due to the limitation to a local and only parts of the day. If your goals include Legendary Phorusaura and/or the new hybrid, Velosrhacos, it's going to cost you a plethora of Phorusrhacos. You can find Deinonychus (I like "Nike" as a nickname) and Tarbosaurus everywhere, all the time, and we don't suggest you use your attempts on these two.

It is first important to note here that this week, we only get TWO DAYS for our Rare attempts. Make sure you finish before reset on Friday, you don’t want to miss out on these opportunities!

Arctops is your ideal choice here as it remains Event Exclusive and the most challenging DNA of the three to acquire. Arctops now fuses with the newly introduced Acrocanthosaurus to create the Legendary Acrocanthops!

Of the other two options, we'd recommend Irritator over Inostherium. Irritator is a component for the mighty Magnapyritor and also has become a raids darling. Inostherium can be fused fairly easily and doesn't seem worth your time and attempts.

The choice here is somewhat difficult to make, but you're best suited going for Allosaurus Gen2. Like Arctops, this one is event exclusive and opportunity doesn't arise often. Gryposuchus is currently a global/anytime spawn, but we wouldn't fault you for wanting to feed your Grypolyth or Grylenken.

A rare opportunity at some dartable Legendary DNA - don't miss out on your single attempt!

Strike Events and Trials are also Halloween Themed, so you can expect to get the same DNA as the Featured Creatures from them. On Friday, we have the introduction of Acrocanthosaurus(!) via Epic Strike. A quick sidebar about Acro: Ludia announced on the forum that Acro will be introduced as part of this week. We have confirmed it is available in the wild! It is in the code as spawning in Local 3 during Day/Dawn/Dusk, and that is where our own Piere87 got one. We'll keep you updated if we learn it can be found elsewhere.

On Sunday we have an Epic Halloween Strike as well. During the Weekend, we'll also get an Epic Trial. Finally, we've got the regularly scheduled Boost Strikes on Tuesday (Attack), Thursday (HP), and Saturday (Speed).

Lastly, there will be a special Halloween Emote within one of the events!

The Themed Scent of this week is Halloween Scent. This scent "will have a hint of pumpkin spice in order to attract the most terrifying creatures on the map." Here is the full list:

The treasure chase continues on Saturday & (hopefully) Sunday. You get once chance each for between 500 and 2,500 coins with distance not mattering. With the Halloween theme, you also could draw some FIPs, so make sure you have space for those before opening a treasure chest. It has been confirmed that their intent is only for one pop per day. We can only hope they have plans to eventually change this to the original treasure chase where they refreshed throughout the day and offered much more opportunity at free coins.

This Week continues the Majundasuchus portion of the Majundaboa pursuit, so keep your eyes out for Nundasuchus!

It seems like the community got it right again with this scary line up for Halloween. With a good lineup of Rares and an amazing Epic creature, we give kudos to the community on voting. Join our Discord Server and let us know what you're darting and why! We hope to see you on there!