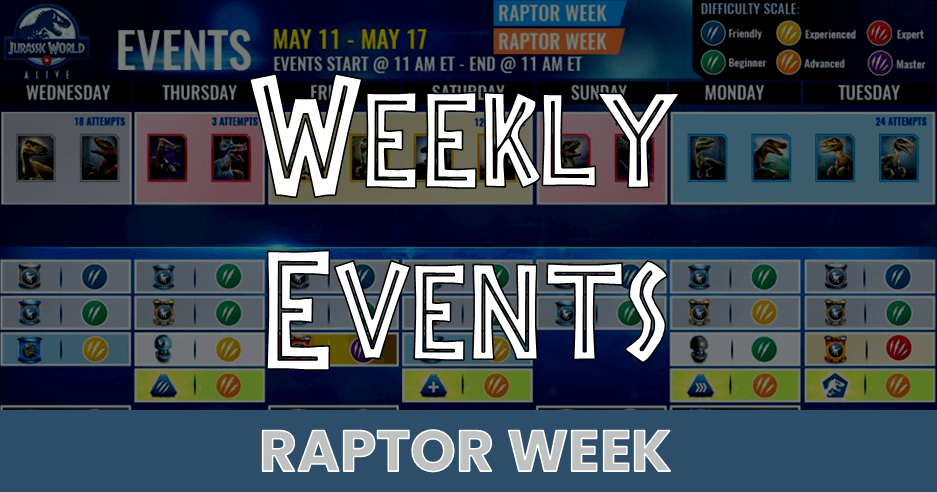 Explorers! First, I'd like to thank Bart for finishing what I started with last week's Weekly Events. The early information we were provided last week comes to life as we embark on Raptor Week. Let's get to it and talk about our recommendations of what to dart before we break down the rest this week has to offer! 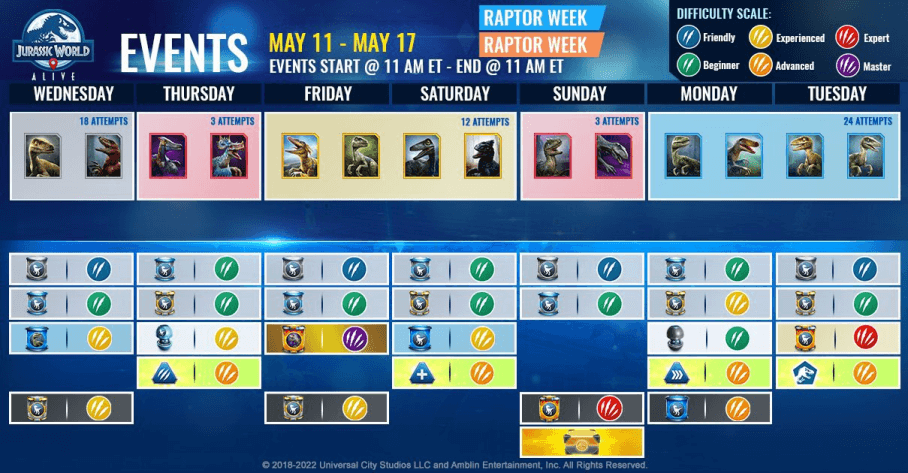 If you are wanting to prioritize working on your arena team, Velo holds a slight edge mainly with more hybrids available. You might also recall that during the April Community Update, the following was included:

In the upcoming updates, we will aim to rebalance several of our oldest iconic Unique creatures. The meta has shifted since their introduction. Based on the data we observe, some of them need to get their kits re-adapted to remain competitive choices at high levels.

Both Erlidom and Indoraptor are of the "oldest" Unique creatures and could very well be receiving some buff love this quarter!

As a base Common, Velo is much more prevalent in tournament than "Nike". You will also encounter Indom in its rarity much more often than any of the other hybrids these two make.

Both of these have hybrids that can be found in some raid strategies, so neither really holds an edge here.

Both of these are global, anytime creatures, and overall neither truly holds a major advantage over the other. If you don't have a major goal for Arena, Tournament, or Raid, we suggest you save some time and dart whatever crosses your path. Especially with only one day to complete 18 total attempts.

We are going to simplify this day because neither of these options or their hybrids are very relevant in any current aspects of the game. However, any free Legendary DNA is always welcome, so make sure you get out and do your 3 attempts.

None of these have hybrids that make much of an impact in the arena, though Troodoboa did receive a recent buff. In this case, we default to "rules of exclusivity" and would order them: Blue, Dakota, Troodon, Pyro.

We don't tend to see these base Epics over leveled and used in Advantage tournaments. The only hybrid that tends to show up is Indo2, so that would indicate Blue as your top choice.

None of these base Epics appear in raid strategies, and the only hybrid we see is Indo2. Again, this would make Blue your top choice here.

We don't find any of these to really stand out over the others, another case where darting whatever you happen upon makes a lot of sense. Another idea is to choose what you have stockpiled the least DNA of. Dakota and Troodon haven't been around as long as the others, and I know I personally have the least of those by a million miles. So I will likely end up looking for those when the time comes.

Alloraptor is the way to go if you're setting your sights on improving your arena team. Allorodrigues is really the only arena competitor here.

Both Alloraptor and Indo2 can wreck in tournament when leveled and boosted, plus they both require an Event Exclusive component. We haven't had opportunity to test out Allorodrigues, but its kit indicates it would be a force in qualifying tournaments.

Indo2 is the only one of which can be found in raid strategies.

Neither of these holds a major advantage over the other, and more free Legendary DNA is always welcome. The most important thing is to get out and make sure you do all 3 of your attempts.

This one is a little tough if you are focused on Arena, mainly a toss up between Delta and Echo. We lean a toward Echo based on the day locked factor as well as Indotaurus being a fantastic Unique. However, we can see Allorod sneaking in at some point as a fan favorite and you're going to need loads of Delta to feed the Alloraptor required.

As base rares, none of these tend to make much noise in qualifying tournaments. With regards to hybrids, Erlikogamma can be excellent in Epic tourneys. Of the possible Legendary hybrids, we see the most of Indo2. And for Uniques, Indot and possibly Allorod would be more often used. You're pretty safe with any of these choices (except "Johnny" - Utahraptor) when it comes to tournament..

Again, Indo2 is really the only one we see in raid strategies, so you'll want Echo if that's your main mission.

Like the others, none of these really stand out over the others. If you wanted to order them on an exclusivity scale, it would go Charlie, Echo, Delta, "Johnny". Twenty four attempts over two days is a lot, so this is another time we think the best use of yours is to split your attempts over multiple options.

Strike Events & Trials will also be Raptor Week themed and will reward the same Common, Rare, and Epic DNA found at Event Drops. There is a very tiny chance you may be lucky and also receive Legendary in your haul.

We agaon have two dinosaur specific strikes this week, a Charlie strike on Wednesday, and a Scorpius Rex strike on Friday. We've also got the Boost Strikes on Thursday (Attack), Saturday (HP), and Monday (Speed) and a Badge strike Tuesday.

We have a basic scent strike on Monday, and prior to that will be a very appropriate Raptor scent on Thursday. This scent can draw the following creatures when activated:

We  are back to our standard treasure chase, where we have the opportunity to open chests each hour to collect up to 25,000 total coins. These chests also reset at 8pm Eastern, providing another opportunity to acquire 25,000 coins by 11am Eastern Monday.

This week begins the Indotaurus pursuit with the Saturday spawn, Echo!

The May season continues with Ailurarctos as our Seasonal Arena Reward and Bumpy as our Daily Dino.

The second week of the Albertospinos AC will be a Common and Rare (All) Advantage Tournament for Kaprosuchus and Spinotahraptor DNA! 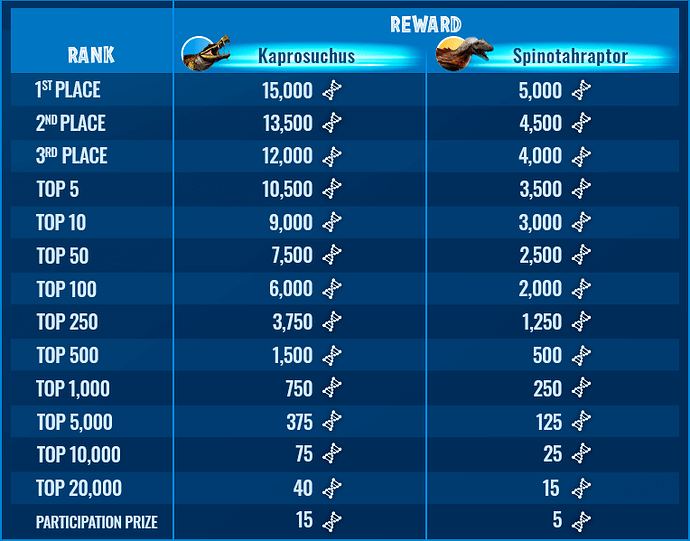 Continued by popular demand, the Mortem Rex Raid will be sticking around on Sundays from May 4th 11:00 AM ET to June 1st 11:00 AM ET. This allows more time for us to level up the Death King!

Raptor Week comes a little late this year, but better late than never! When we analyze an make our suggestions, we tend to favor the "end game" but understand not everyone is quite there. Come join our Discord server and talk through where you are and what your goals are with our thousands of members. While you're there, let us know what you plan to dart and why!