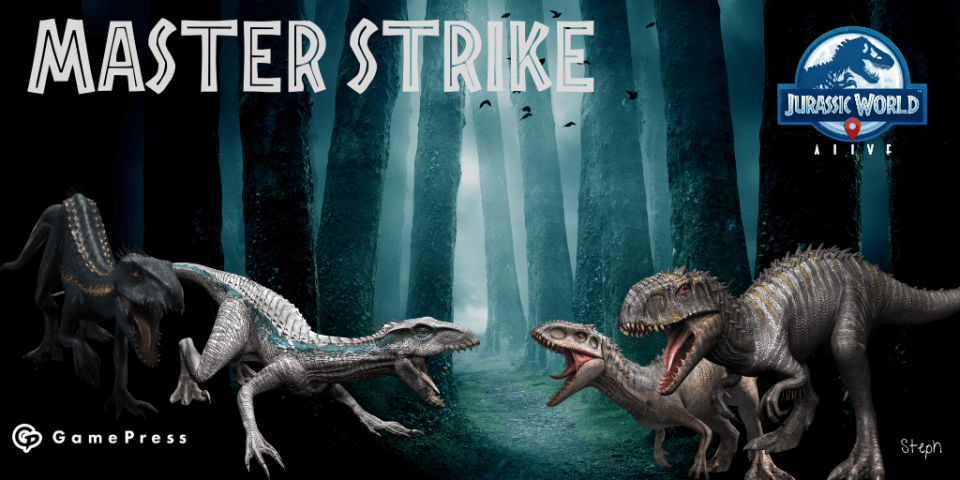 Explorers! Welcome to the Strike Guides, where we cover Jurassic World Alives most difficult Strike Events! Today we have a real tough matchup for anyone with dinos at level 25 or under. In fact, it's tough enough that those with level 20 teams to level 25 teams may not be able to even beat it (even with boosts).

But you've always gotta give it a shot and see how you do! Before we get into that - we feel obligated to give you our disclaimer:

Now, with the disclaimer out of the way, let’s take a look at the dinosaurs using this infographic made by our artist Orange Rex! 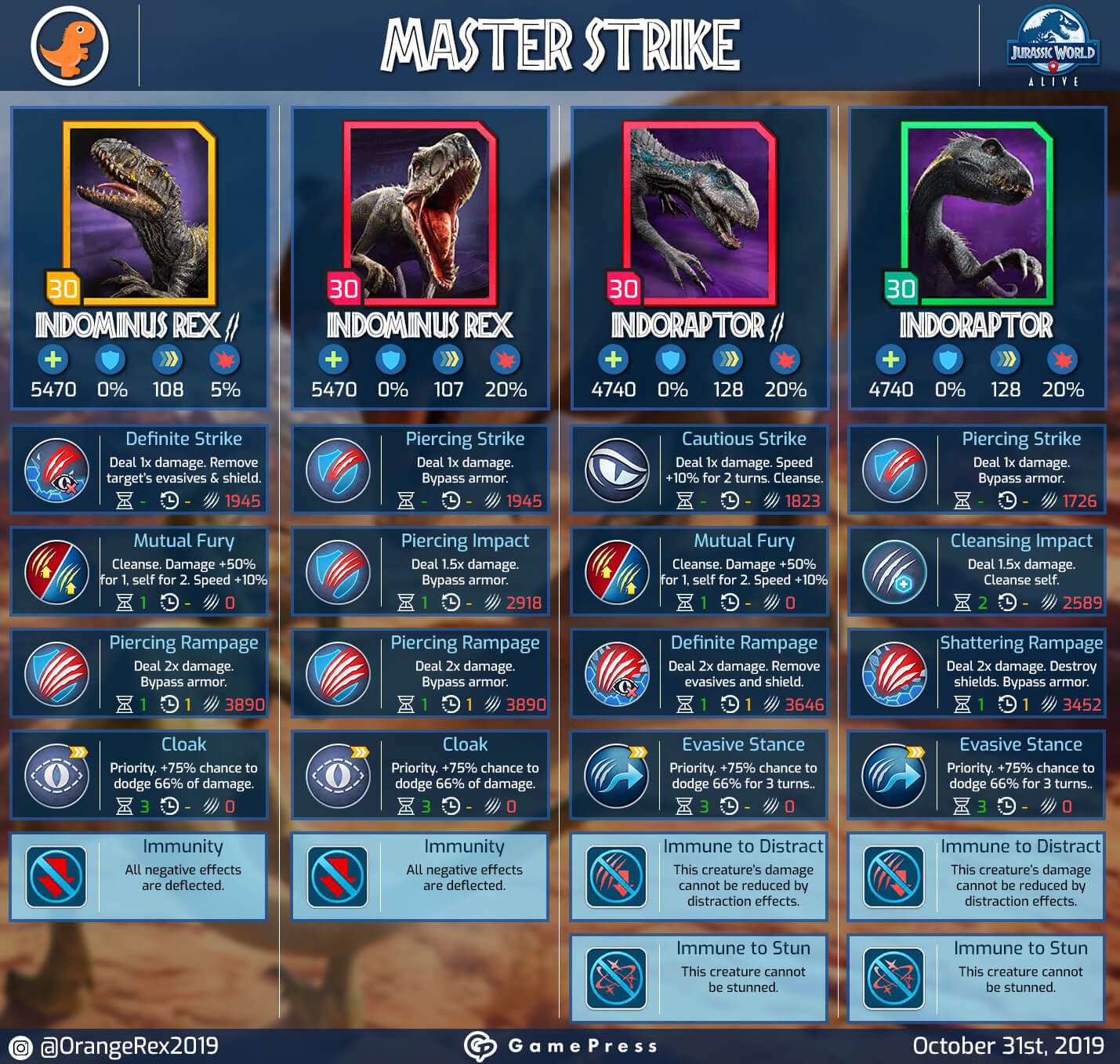 It's gonna be quite a wild ride to beat this fearsome foursome.

Indoraptor and Indoraptor Gen 2 are in part fearsome because they have so many tools to beat being killed. Both are immune to distraction and stuns, so you can't use faster creatures with pounce. Both have Evasive Stance so they can evade damage. Both have an insane 2x move that breaks shields and cuts through armor.

And both have cleanses that can counter bleeding, so it may not be worth it to use a bleed on either unless you're using a swap in wound as a sacrifice play or a hail mary (and you could still get unlucky on a cleanse).

The surest fire way to beat either Indo is to handle them with slowing moves, and punch as hard as you can. And the best way to do that effectively is to hit as hard as you can on turn 1 and swap in DC on turn two.

If you get lucky like I did, you might end up getting a mutual fury on turn 1 that boosts your damage. But maybe not. If the plan is swapping in DC, you want to use tanky creatures with slowing moves just in case you need 2 turns of damage. Especially since you may only get 2 turns before pretty much any dino in the game dies.

Remember: Indo Gen 2 is one of the top 3 dinos in matchups in the game. So you may have to throw everything you have at it. Building a team with some form of shields so you can handle the later Indominus Rex pair is going to be essential.

Let's take a look at the only decent counters to Indo Gen 2 right now (assuming even levels).

Again, because Indo Gen 2 is so flippin difficult, don't be afraid to use up everything you have on that and deal with the next problem as it comes. You need to walk away from this first match with as much health as possible to make it through the rest. Even playing something like Thor, which may not be a great counter but at least will get two solid shots in on a sacrifice play, may be worthwhile.

Thank goodness beating Indoraptor isn't as hard as it used to be -- back when nullifying didn't remove cloak, and it had cloak instead of evasive stance, and it killed everything in the game in 2 turns and there were no swap in actions.

It wasn't pretty back then.

Let's take a look at the strong counters for Indoraptor - courtesy of our dinodex and battle simulator.

There's a lot of trends in the above. Lots of cloaking for cloaking, lots of nullifying, lots of breaking cloaks with definite hits and slowing moves. The real key to beating Indoraptor is to slow it the turn before you kill it (or after its blown cleansing impact on turn one). Stuff that has a decelerating rampage or decelerating impact on turn 1 is ideal. Armor won't help much, but can be used if desperate.

Again, Indoraptor cannot be stunned or distracted, but it can be slowed. And the above counters are assuming equal level (which you may not have) so just because you are using one doesn't mean you'll win the matchup.

If you've still got a high level Stegodeus lying around from the early days of Jurassic World Alive, it's a good option (especially if it can survive the first two hits). If nothing else, slowing indo down, doing a rampage or big hit before death, and bringing in another slow chomper like Thor or Tryko will allow you to finish off Indoraptor before it can lay on even more hurt.

At least in this case, a shield can save you from a devastating blow (though the definite strike can still break your shield -- it'll at least be less damage than a rampage + cloak (4x attack).

Let's take a look at what the sim has to say.

We've got plenty of tanky options with nullification here to clear out a cloak attempt. Thankfully Indom G2 is slower than most of the nullifying creatures so using a nullifier may help, but it's gotta have enough bulk to survive.

Honestly you may be able to get away with 1-2 tanky options that would counter Indom Gen1 and use it for both. While a cloak + rampage would kill, having a shielding tank like Stegodeus or Alankylosaurus or something with an invincibility is only going to take a 2x hit from definite strike if the Indom Gen 2 plays correctly (and doesn't try for a rampage).

Unfortunately, Indom and Indom Gen 2 cannot be bled and are immune to everything (distract, stun, slow, bleed, lockdown, you name it) so you've gotta have something faster, something that can take a hit, and something that can shield if a cloak happens for both of them.

Finally we have Indominus Rex, the least fearsome and yet still troublesome beast that likely made your life a living hell as you progressed through lower arenas (or is maybe giving you a hard time now).

Let's take a look at what the battle simulator says about counters!

The classic Stegodeus counter works wonders for Indominus Rex. The biggest trend you'l see in these counters is that they all have shields and they all kick out decent damage for tanks.

Having a pocket nullifier like Tanycolagreus may actually save your bacon in a matchup like this, but there's no room for a single counter when you're in a straight up epic 4v4 matchup like this Epic Strike event.

The counters above should help you, but it still may be a really close one for most of us.

If you beat this Strike Event, you’ll be rewarded with a Bloodstained Epic Incubator at your level. That means you'll get either Indominus Gen 2 dna or Allosaurus Gen 2 dna (or maybe both). You'll also get the other voted on fearsome beasts (Suchotator, Rex Gen 2, Kelenken, Tarbosaurus, Tanycolagreus, Velociraptor).

This Strike Event is extremely difficult, so be sure you’re going in prepared. With the new Boosts system, there will be more difficulty taking these creatures down! Were you able to defeat it? Let us know how in our Discord server! We hope to see you on there!