So you've decided to use Stygidaryx 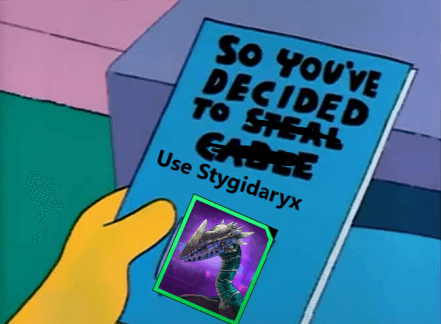 With the changes to Stygidaryx in the last few patches, people are finally starting to see the viability of this unique bird. One of our discord members and moderators, DadJokes, has always been a champion for this often underrated Unique bird and wants to share his thoughts on the most recent changes and how it can be useful on teams.

Last year during the lunar event, I wanted as many incubators as I could get. I was darting every single Darwin that I had a shot at, and I was praying for Darwin as rewards in strike events. I wanted to create Stygidaryx. I needed to create Stygidaryx. I had never purchased any of the $49.99 incubators in fact I had told myself that I would never spend that much on this game but that changed when I had a chance to get Darwin DNA. I instantly put it on my team. It didn’t matter it wasn’t team level. It didn’t matter that everyone told me I was wrong for creating Daryx over Vexus (which wasn’t even really that good at that point). I was excited to have Daryx and I wanted to show it off in the arena and now I see everyone saying that they are thinking about adding Daryx to their squads and I’m HYPED! I love it!

Stygidaryx has been the laughingstock of the arena for many patches but are Daryx’s days as a joke in the past? Maybe. The NO ESCAPE ability is an interesting one. My initial reaction was “Yes! Daryx got some love in 1.12!” and then it was a little bit of confusion because its only bleed moves are swoops. So how do you use NO ESCAPE if you’re always swooping away? Well don’t worry! I got you. We will address that on our journey. 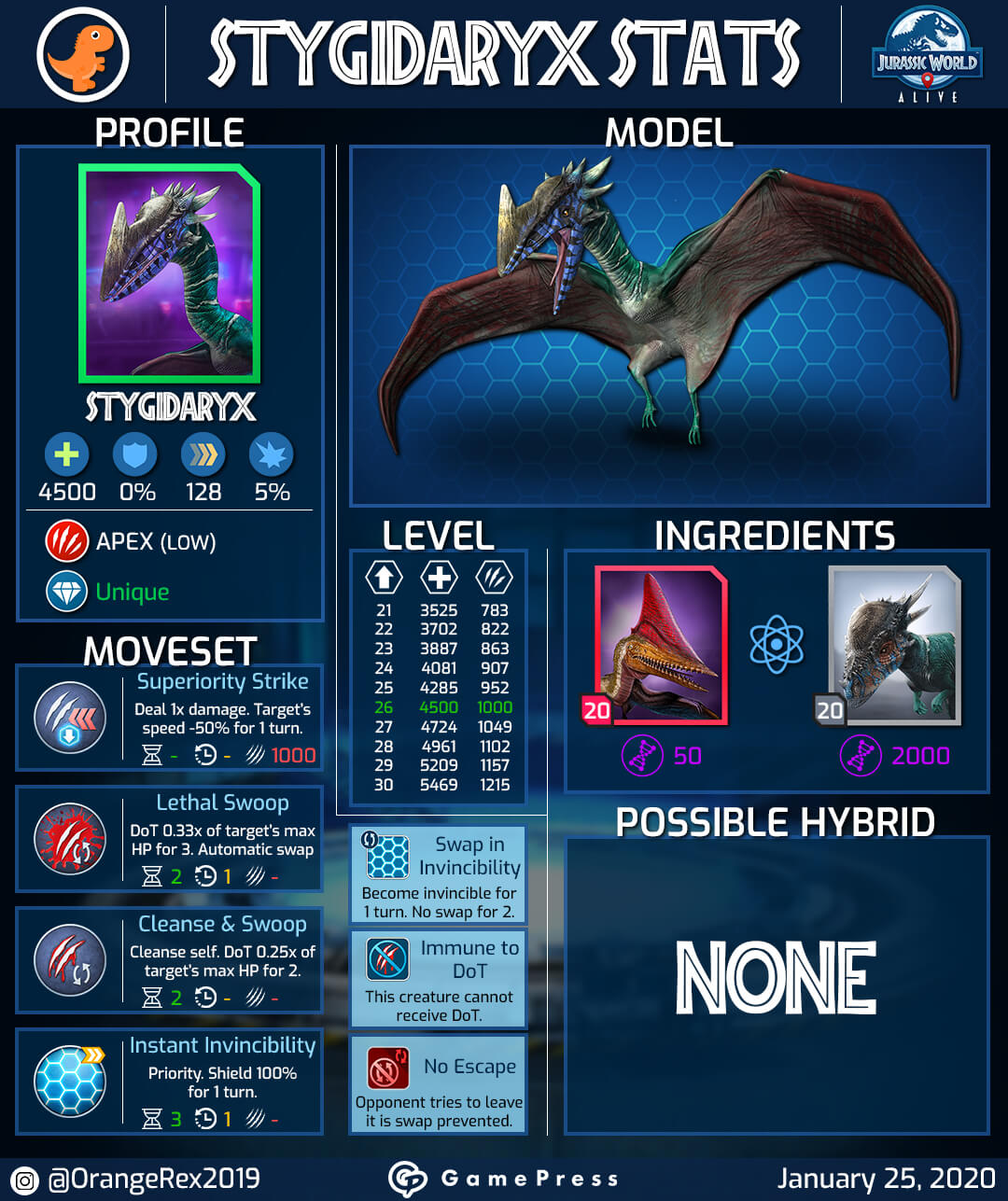 Daryx’s moveset is nothing new, but its new passive ability NO ESCAPE is. (And yes NO ESCAPE is all caps. Gets the point across that you’re trapped). Let’s take a look: 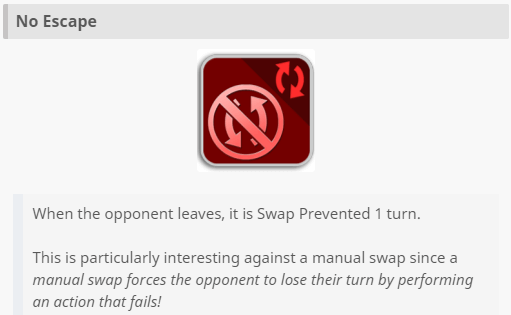 So, what does this mean? How does this work in realtime? Well if you try to swap its just that, you lose your turn. The screen posts this sweet “NO ESCAPE” graphic and nothing happens. I have used this a few ways. As a late-game pinner and as an effective bleeder especially against 2 tanks that are very common in arenas currently (Grypolyth & Dioraja). Both of these creatures do massive damage with their counter attacks, so a creature that doesn’t really have any attacks is their perfect counter.

Now we know that Stygidaryx’s attack stat isn’t great so this isn’t always going to be effective. I have used NO ESCAPE basically to pin a low health dinosaur when the score is 2-1 or 2-2 and I just need 1 more knockout to win. Paired with swap in invincibility it can be a great way to get a full health creature in to do some damage and deal that knockout blow. This isn’t always easy to pull off but when you see that your opponent is trying to swap and the words NO ESCAPE come across the screen, it’s a good feeling for sure.

Against Grypolyth it’s easy, you use grypo’s own NO ESCAPE ability against it to stack your bleeding moves. You can go cleansing swoop, followed by lethal swoop, followed by instant invincibility and then repeat. Because Grypo can regen you typically have to use 3 bleeds to finish it off.

Dioraja is a little trickier because when you swoop, you leave. Dioraja is also going to do some damage with its ferocious strike & superiority strike but another great thing about Daryx is that it’s a chonk. A high health pool allows you use to Stygidaryx to eat damage, so the rest of your team doesn’t have to. When I am swapping against a Dioraja, I look at my team and decide who do I want to take damage? If its Daryx, I wait to swap in until after the Dioraja has used ferocious strike. That way I am swapping into Dioraja’s superiority strike attack. This is blocked by Daryx’s shield but Daryx is slowed giving Dioraja priority on the next move. This is where I want to be. Now Daryx can use cleansing swoop, inflict DoT to Dioraja and bring someone else in. This is important because if the creature you swoop to is faster than the Dioraja you can swap back to Daryx on your next turn and Daryx will block Dioraja from leaving. Again, because game mechanics say if both opponents try to swap at the same time, the one with priority swaps first. So that means you get Daryx back in before the Dioraja swaps and NO ESCAPE pins it forcing your opponent to lose their turn and eat another bleed move. Typically, this is where I will use superiority strike. I will have to eat a counter, but it sets me up to finish the Dioraja. Afterward you can repeat the steps above as the Dioraja most likely used superiority strike again.

There are certainly lots of other creatures in the arena which Styigdaryx can be effective against.  I would love to discuss those with you 1 on 1 so if feel free to DM me on the GamePress server (DadJokes) and I will run some scenarios by you! I love Styigdaryx and I hope that you do as well, so I want to make sure you are using it in the best way possible!