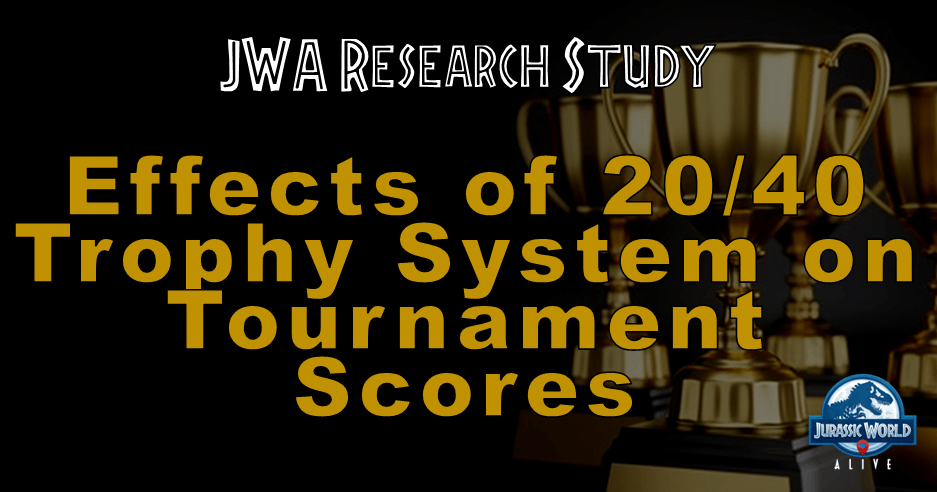 Despite previously ensuring us they would not implement 20/40 trophy system in tournament, Ludia decided to “take it back” and did just so this past weekend. Despite massive community outcry against this decision, they moved forward with it. So how did it play out? Let’s have a look at some numbers and conversations about it.

Inside the Numbers - Alliance Totals

Much speculation about this change is that they are subtly trying to suppress scores in order to prevent alliances from achieving higher rewards. They dangle this bonus reward carrot in a 5 week month and then implement a system where that becomes a bigger challenge.

In the 5 week ACs we had in March, 11 alliances achieved Tier 10. That was up from 6 who achieved it in November. Teams are working hard to add tournament slayers. They are working hard to evolve their existing members in to tournament slayers. As a leader of a long time Tier 10, I can assure you this task is not easy. And now we are in danger of missing Tier 10 for our first time because of this new system. After this week, the “pace” toward Tier 10 was 324,000 cups. There are only 6 alliances at this pace. After week two, there were upward of 15.

I keep spreadsheets of our tournament performances. After 3 weeks in March, our alliance sat at 329,720 total points. After 3 weeks in May, we are sitting at 321,624, and that’s with week 2 resulting in heavier contribution because of the boost shuffle. This major decline isn’t for lack of grind or trying. If anything, they are pushing even harder. It’s that there is more time spent making up for lost cups when it takes more matches to do so because of this system.

I reached out to some leadership of other Tier 10 alliances seeking out more numbers. PackBrewCrew, a tournament officer for Timmy What Is It (the perennial AC leader who always CRUSH the necessary numbers), told me: ”I did 3 different math equations. All have come out to projecting a 20% drop in total points. TWII scored 701K in March AC. At 80% we only would have gotten 561K which would be 89K short of T10.”

My initial plan was to compare progress after week 3 of the March ACs to progress after week 3 of May (thank you to PracticeKat for furnishing some numbers for that rabbit hole). However, as PBC pointed out, the boost reset in week 2 of May created opportunity to build a thicker cushion going in to week 3. In a conversation with Ethan, leader of Parks N Wreck, we figured out it's best to simply compare alliance totals in May Week 1 vs May Week 3 (both skills tournaments). With Ethan's help, I was able to compile the following information:

Imagine those reductions in all tournaments, and it's plain to see that this system will disallow for about anyone to ever achieve the highest rewards as they are currently set up.

Inside the Numbers - Individual Totals

This brings me to show you the math and how things play out in this system verse the old 30/30 system. I’d like to thank Banarel on the forums for initially sharing this and inspiring me (and others) to do the same.

kasicKO on the forum expressed a similar experience but invested more time. “After almost 10 hours of my playing time in this tournament with this super change I have to say I am exactly where did I start - 800 trophies. Usually I have 1200ish trophies at this point.”

I understand these aren’t all tremendous sample sizes, but it’s very evident what’s happening here. We are ultimately granted less for the same or even more work. On a per match basis, the net gains are trimmed by 3 to 7 trophies based on these three samples. Take an average of 5 and multiply that by the 4 matches it takes to get the 10 take downs. There’s a shortage of 20 cups per person right there. Then take that by 50 alliance members, and you’re collectively 1,000 cups below where you’d be in a 30/30 system. It’s very likely that this average decreases over time, but it’s extremely unlikely it ever flips to a position the player is averaging more per match. If you want to see more details and some pretty charts, here is a link to the forum post.

Taking a look at the leaderboards from weeks 1 and 3 (both Skills), you can see an evident decline in scores (20-25%). What's also interesting is almost a completely different set of names: 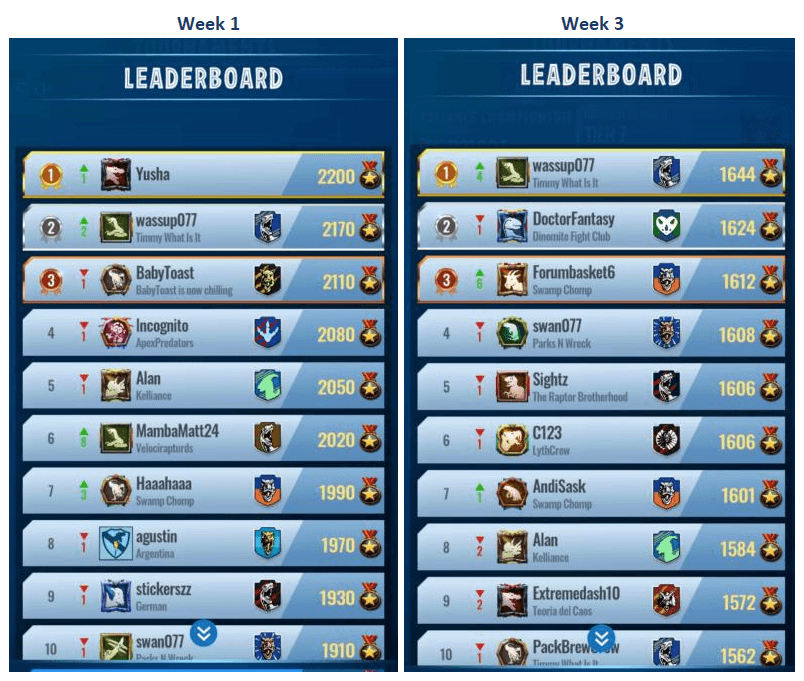 Now that we’ve given this a chance, how has the community responded? Mostly frustrated, as can be expected. It’s bad enough they chose not to hear what the community came together about. The most frustrating part is they didn’t even acknowledge it. They promised better communication yet refused to explain their choice to stick with the 20/40.

The system is destroying motivation to fight on. It is deflating players. Kelliance member, BaRaKuda, stated “Yea I’ve only been down 100 but knowing I have to win 5 straight to get to my high does deters me away from playing. I also thought burst playing would give me more trophies, not the case.” Forum member, DeLana, posted, “Although my members are required to get their 10 takedowns, I will certainly not expect them to do more since I can’t even motivate myself. And I usually love PVP…”

It’s extremely sad to see players express how this system is further ripping away their love for this game. Discord friend and forum user, BayonetteWork, said, “I’d rather eat broken glass with a spoon than participate in this, or any other tourney if this is the new standard.” Fellow GamePress moderator and LythCrew leader, p2nd2b32r, had a lengthy post sharing her experience from a variety of perspectives. The part that fits here was, “I love tournaments but after seeing the past couple of days, it has become such a burden and I became very tired, very fast.”

As of Monday morning, there is a now a survey asking for our feedback. Feedback we've given via many avenues. Perhaps it means more to them when they initiate it, or perhaps they don't want all our words just marked circles and boxes. Anyhow, here is that link, please represent your opinions.

How to Fix It?

I was always taught that if presenting a problem, it’s best to come armed with solutions. The basis of this problem is the 20/40 range is too great. The two to one ratio of possibility often puts players in a position where it takes two wins to make up one loss. If Ludia doesn’t want the even stevens 30/30 system, they should consider something like 25/35. They seem to be really bent on the ends equaling 60, so that feels in line with something they would do.

The logic behind this change is to reward players for beating stronger teams. This makes zero sense for Skills where our only limitations are if we haven’t unlocked something yet. Other than that, nobody’s team is better than anyone’s. Cup totals are mostly driven by time invested. Of course there are players who are naturally better at the game and others who benefit from RNG factors (speed ties, timely crits, etc). The game can not recognize the difference and should not reward or punish anyone based on their current progress. I can understand how this would make sense in Advantage, though sometimes you are overly punished because of things out of your control.

My proposal would be to keep it 30/30 in skills where there is no clear cut differential in team power. Use 25/35 in Advantage where there is and where one missed stun or one opponent’s perfectly timed 5% crit won’t completely derail you.

Perhaps Ludia’s toughest challenge will be winning the community back. They broke our trust by saying one thing and doing another. They broke our trust by promising to listen and communicate but in this case did neither. Whether the true intention was to suppress scores or that’s just a terrible side effect of a terrible idea, the proof is in the poutine that this system does just that. The system itself is evidenced as responsible, and the fact that players more easily give up only exacerbates the problem. What was your experience with this system and how might you change it? Join our Discord below and get in on the discussion!