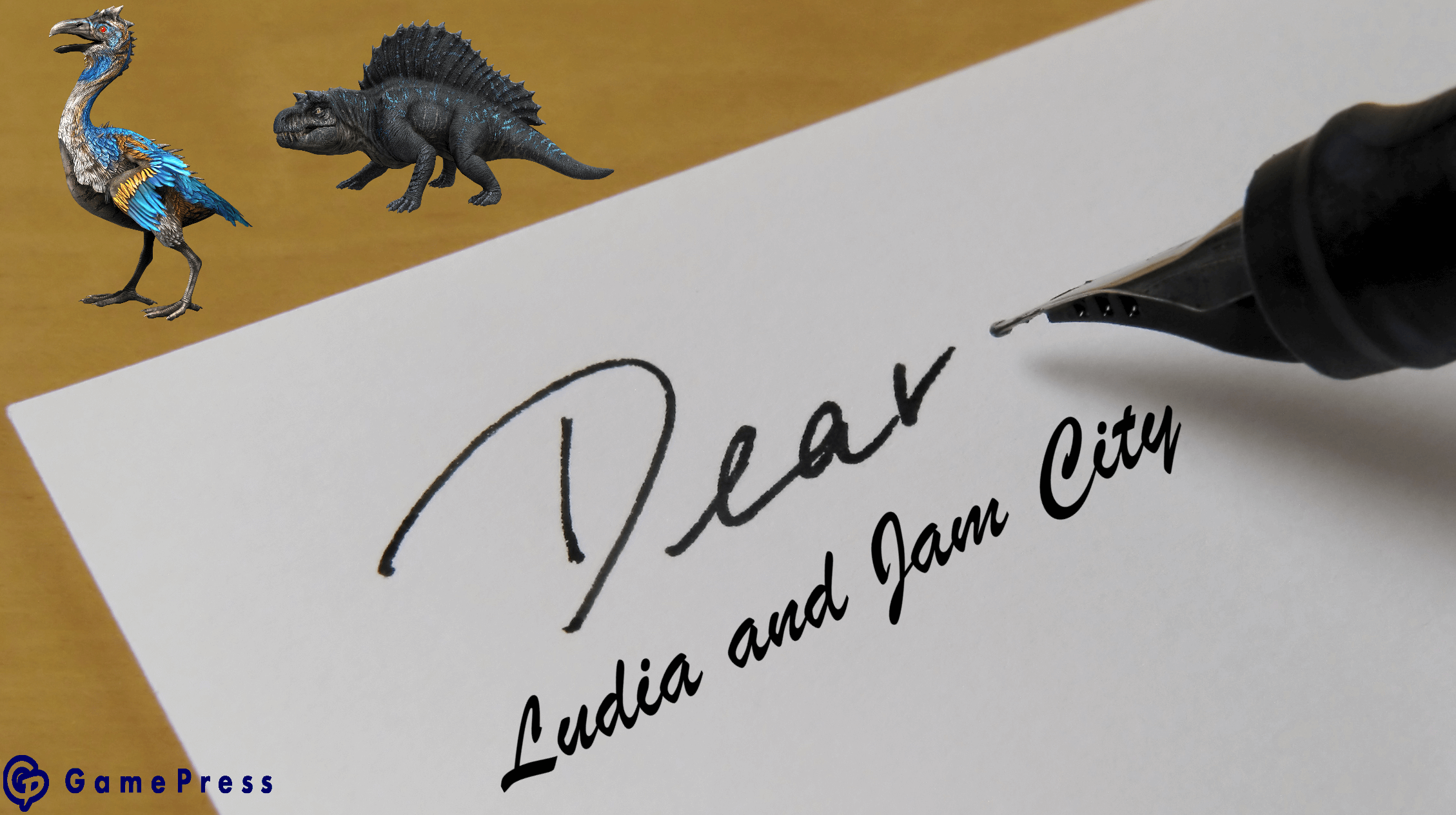 When I started Jurassic World Alive, in early 2018, hunting was a key part of this game. You had to physically go out and dart dinosaurs to get your hands on powerful creatures. When a player managed to unlock Trykosaurus, a Unique made of three incredibly hard to find creatures that one had to get to a pretty high level for the time of the game, it was an achievement to celebrate! The game rewarded you with an incredibly strong creature!  The player felt that this accomplishment was worth their time and effort going out. Soon, new ways to obtain creatures started, with Battle Exclusives, where you could only get a creature’s DNA from incubators.  This gave you an encouragement to battle and obtain Incubators, rewarding you when you win. How do you win a lot? By levelling up your creatures. How do you do that? By going out and collecting the resources needed by hunting. This way, hunting and battling went hand in hand with each other, complimenting each other and rewarding you with creature DNA for your effort and accomplishments.

However, Update 1.2 introduced a concept that would later be known as Event Exclusive Creatures. The introduction of Blue marked the first time where a player could not gather non-hybrid DNA from either the Arena or on the Map. You had to rely on the Event Drops that Ludia uses for the Weekly Events, creating a serious problem if you wanted to dart something else, as there was no other method of obtaining our favourite raptor. In later updates, more Event Exclusives such as Dsungaripterus, Diplodocus, Brachiosaurus, Pachycephalosaurus, Woolly Mammoth, and Nasutoceratops, to name a few, started getting introduced. The number of Event Exclusives slowly increased, and players wrote to Ludia about having difficulty obtaining the DNA needed for these creatures and their respective hybrids that got introduced. Introducing Sanctuaries in Update 1.8, this new feature allowed people to get their hands on Event Exclusive DNA at a more regular pace.  We could use our Food, Interaction, and Toys to get DNA from these creatures. The higher the Sanctuary, the more DNA you would get, so this also incentivised teamwork between Alliances. However, this new addition also opened the floodgates to more Event Exclusive creatures.

As of Update 2.15, 21 out of 155 creatures are Event Exclusive creatures. This including the new Rodrigues Solitaire, who I will shorten to Rodrigo from now on. Rodrigo caused quite the ruckus when Ludia announced it going from Huntable on the Map to Event Exclusive, with the Community actively expressing their disbelief and disappointment at this last-minute decision. This change properly angered many, and plenty of players voiced their frustration at this, mentioning it to be “yet another cash grab” to quote a community member from the JWA Discord Server.  Two days after the update, a Rodrigo Incubator was also sold in the Store.  As a business move, it may be considered smart, but this kind of change should not be done at the very last second. Timing matters.  If Ludia wanted Rodrigo to be an Event Exclusive, it should have been announced as an Event Exclusive from the start. The last-minute change was horrendous. This is how a company loses a player base, and that is ultimately what you need for a game to be running and profitable. I get it, a game needs to bring in some money. But there’s a community aspect to a game as well that leads to success- it is a balance.  The last-minute change to something the community was excitedly looking forward to and then taking that away is a very good way to kill off a player base.

The development of more and more Event Exclusives being the absolute top-tier creatures each update is once again apparent under Albertocevia, who has immediately shown itself to be the absolute best Unique in the game.   It is a solid contender for best creature in the game. This happened just two updates after the other Albertosaurus hybrid, Albertospinos, received a buff where it became one of the strongest creatures in the game. Now with Albertocevia, Albertospinos immediately became irrelevant, as Albertocevia just outclassed it in every way possible. This seems to be a trend with Event Exclusive hybrids, and to a certain degree all new creatures that are being introduced, but most apparent with Event Exclusive hybrids. Ankylos Lux, Arctovasilas, Albertocevia, Ardontognathus, Parasauthops, Skoonasaurus, Andrewtops – just a few of the creatures these last updates that have shaped the meta, and some are already getting power crept out of the meta. The fact that more and more powerful creatures are getting introduced, each requiring difficult-to-get components that we cannot truly hunt for aside from spinning Supply Drops for FIP items to use in Sanctuaries is just incredibly demoralizing. The excitement for Jurassic World Alive is about the hunt, not about the FIP. People want to go out and explore, not sit in a chair and FIP their way to new creatures. That is not how this game was at the start, and that is not how this game should be now.

Ludia and Jam City, we love this game of dinosaurs.  Jurassic World Alive.  Creatures ALIVE in our world- our town, city, park- to hunt & dart.  We love going out and exploring our neighbourhood to hunt for the dinosaurs we need to create our superpowered hybrids. The last thing we want is for all the new and exciting toys to be locked behind a wall only surmountable by either paying for it or waiting until you drop an Event for it. We want hunting to become relevant again. We want to once again relive the excitement that we had in the old time, of hunting rare creatures to unlock the powerful Unique or Legendary. It felt rewarding. Right now, with the Sanctuaries and the FIP items required, it doesn’t. We really want hunting to become great and enjoyable again, but things need to change in order for that to happen. The amount of Event Exclusive creatures is too much, and we, the community, would love for this to be changed.

GamePress will release a follow-up article to this letter in the coming week where we will propose a few solutions to the hunting problem that we and the community came up with. An example being a monthly rotation system, similar to how the Hybrid Pursuit functions. Each month, one or two Event Exclusives become Global creatures for a month. For example, in April, Bumpy and Cervalces will be huntable, while in May, Rodrigo and Blue become huntable. This gives the hunters in JWA a chance to obtain valuable DNA that otherwise would be difficult to obtain. We will go more in-depth on ideas like this in the future article, so be sure to watch our media channels for that one.

I want to reiterate that the community really does want the best for this game, even if we don’t always praise it. We have all stuck around for a reason, and this is the hope that one day, Jurassic World Alive will become a great game to play again. But in order to do that, we need to see some changes in hunting and power creep. We understand that this might not be something to easily fix or implement a solution to, but some communication about it or a mention of it actually being a priority to Ludia/Jam City would come a long way. I truly hope that this letter will reach you guys, and that the message I want to convey comes across as well. I will once again remind you that there will be screenshots of player quotes below this letter, where the community has shared their opinion on Event Exclusivity and the Rodrigo switch to being Event Exclusive. 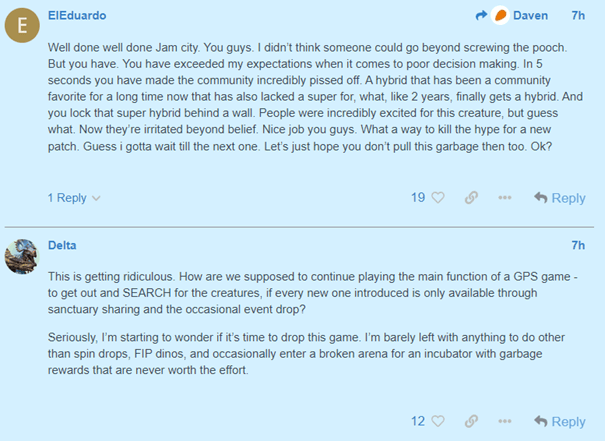