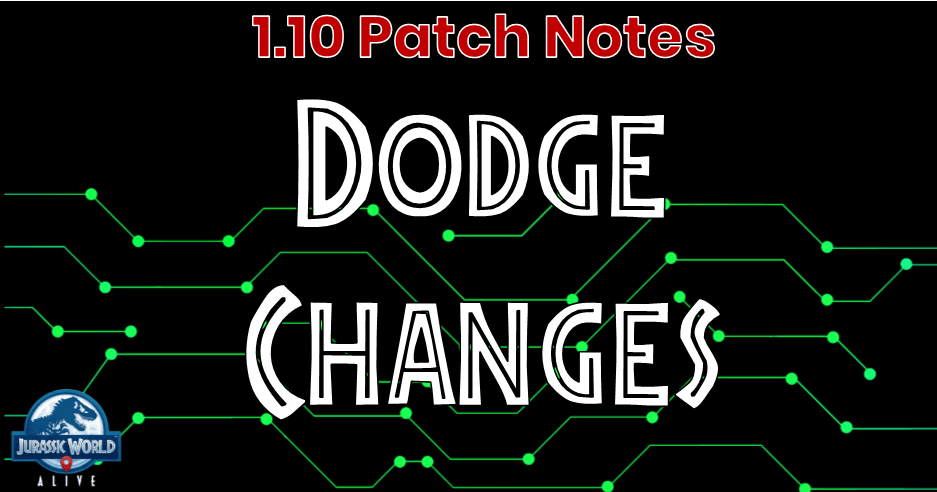 Patch 1.10 is coming soon, and it appears to be a patch between patches, one that focuses on some great quality of life features that were needed in the game, and some fun new stuff as well. We’ve got changes to realism (bring on the bloody reality of dinosaurs slashing each other), some changes that were previously mentioned to stat boosts (be sure to check out our stat boost tool to calculate yours), some changes to Dodge and minor balancing for creatures based on those changes, and some cool changes to how long sanctuaries get shared with alliances.

We’ve got you covered on all of it! Let’s dive into what we’re seeing and what we think it’ll mean for Jurassic World Alive!

Presently, the dodge mechanic works sort of like a reverse distraction. Rather than distracting your opponent causing them to reduce their damage (something that can be cleansed) – dodge offers the opportunity for your creature to take less damage from opponent moves.

For a long time (through patch 1.8) that mechanic gave you a 50% chance to dodge 100% of the damage done. This led to some frustrating results. Some creatures would dodge attack after attack in a sheer RNG streak, and it was infuriating.

Later on, counters to dodge arose but they still left a bad taste in a player’s mouth. While you could use nullify to get rid of a dodge, and later definite strike to clear a dodge and hit for sure (breaking armor and shields as well), dinosaurs with these moves were hard to level to the extent that it mattered immediately.

When dodge was further changed to have a 50/50 chance to negate 66% of damage – people started removing dodgers from their teams. Often dodge dinos had lower health, and getting hit no matter what was also hard for moves that ONLY dodge. Evasive Stance for instance became a move that most people didn’t even bother to use as it could be a wasted turn. Getting hit for 100% of damage on one turn and 33% of damage on the second might be enough to kill a dino before it could even do anything besides evade.

But now, Ludia is making yet another dodge change and it looks to have an impact.

Ludia sent out a survey a month or so ago asking people what they wanted to see in the dodge chance, and the results are in!

Most people wanted to keep the damage negation the same (at 66%) but make it more likely to work. Now, Dodge is as reliable as stunning (75% of the time) which means it will more often than not end up favoring the dodging creature.

The patch notes hint that even this may not be enough to bring dodge back to relevance (stating that “For now – it becomes more potent than pre-1.10” but they will “continue internal discussion for Evasive Stance in the future.” This could mean that Evasive Stance gets more changes in the future.

The key takeaways here are as follows:

But what impact will this have on the numbers themselves?

Toying with the numbers

Back when we had a few options available for dodge, we figured we’d do a little noodling with the battle simulator to see how this might affect various creatures in various situations. Overall, it seems like this change will have a decent and yet not overpowering effect on matchups.

Some creatures with dodge moved up as much as 10 spots in the simulation (things like Indoraptor came up as high as top 20 from well below that). Other creatures only moved a few slots. Granted, we were not yet able to test these creatures with the stat changes mentioned – just modeled “what would happen if Ludia decided to change it to 75% chance to dodge or changed it back to negating 100% damage etc.”

We’re certainly interested to see how it all plays out with these new stats in conjunction with these new dodge chance figures, and it seems like it should make some things viable that weren’t viable before – especially with a full boost reset that we’ll be seeing with version 1.10.

Overall, we’re looking forward to seeing how it plays out, and still hope some changes come to Evasive Stance (and maybe Cautious Strike deserves a bit of a nerf… cause dang that move does everything). We can’t wait to see it all in action!