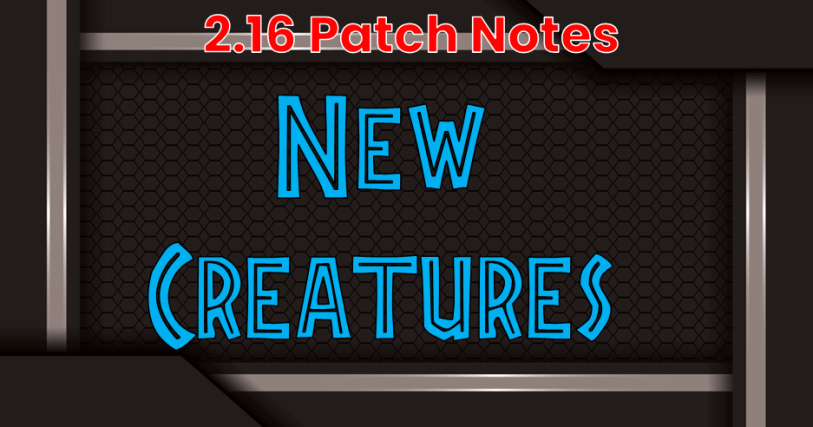 Explorers! Update 2.16 is here, and it brings a slew of new features, creatures and QoL to the table! Be sure to read everything about it in our articles, where we break down everything related to this Update!

In this article, we will be breaking down the New Creatures! What toys has Ludia given us to play with this time? We have four non-hybrids that coincidentally are also all in the new Dominion movie, and 3 new hybrids to play around with. Let’s see how they stack up!

This new Rare sauropod is the first Sauropod we’ve received in a very long time! It fits in with the other Sauropods due to its focus on Deceleration, and a touch of Shielding and Vulnerability to give it some more tricks to use. While nothing is known on its Stats and Resistances, being a Sauropod will probably mean that it has high HP, but lower Attack and Speed. Either way, this is going to be a welcome addition to the game, as it seems to be a Flock counter above all else!

Dreadnoughtus will spawn on the Map, meaning you can go out and hunt it! When we know the location, we will update our Spawn Guide as soon as possible!

The Biosyn Engineered Therizinosaurus sports a twenty-foot-long neck and weighs up to 11,000 pounds. The three razor sharp claws on each of this herbivore's forelimbs measure a whopping three feet, the longest of any known animal!

The first time ever since the start of the game that we get a new non-hybrid Therizinosaurid, and it is the Therizinosaurus itself! This long-clawed creature acts similar to Erlikosaurus and Erlikosaurus G2, but focuses on hitting harder than its family members. With Cunning Ferocious Strike, Therizinosaurus buffs its own damage while reducing the opponents damage output, and with its Delayed Precise Rampage it’ll hit where it hurts! Armor and Shields are Therizinosaurus’ bane though, and it shouldn’t fare too well against Flocks either. However, we’re more than excited to see this Rare being introduced into the game. Stats and Resistances once again unknown, but we think we can expect something similar to the Erlikosaurus family: High Speed and Attack, lower Health.

Therizinosaurus will be Event Exclusive, meaning you can’t dart it.

Lystrosaurus is a Cunning, Hit & Runner.

Meet Lystrosaurus, the “shovel lizard”! This tiny herbivore is a powerful digger that nests with its kin in burrows overnight.

A new Flock has joined the fray, yay! Lystrosaurus presents a mobility-focused Flock, focusing on staying alive for long periods of time and chipping away at the opponent. With Cunning Strike and Evasive Restore it will attempt to stay alive as long as possible, and Impact and Run will allow it to get out of tricky situations quickly. Swapping in will allow it to heal back, and swapping out of it will give Lystrosaurus a Speed boost and more Dodge chances. Seems Ludia designed this one to be hard to kill, but the Stats and Resistances will have to determine how hard it truly is to kill.

Lystrosaurus will be on the Map, meaning you can hunt for it! Once we know the location, we will update the Spawn Guide!

This Cretaceous period theropod is the largest known terrestrial carnivore. The Biosyn Engineered Giganotosaurus measures approximately 43 feet in length and can reach speeds of up to 30 mph!

The big bad of Dominion is here, ready for a showdown with its opponent! This Fierce is all about damage, and it shows with its kit. Group Defense Shattering Impact gives it an option against those pesky Flocks, while keeping the damage output high with Fierce Rampage! You can even opt for some passive healing with Fierce Devouring Strike! Alert Showdown is the most interesting move on its kit, healing both it and the opponent to full health and then locking both in to have a good ol’ fashioned 1 on 1 brawl. A very unique and interesting addition to JWA! As its description mentions a Fierce, Low Speed attacker, we don’t expect this Epic to have a Speed stat anywhere above 105, but to compensate that we expect High Health and Attack from this creature, similar to the Tyrannosaurus Rex, or maybe even similar to Rexy!

Giganotosaurus will be Event Exclusive, meaning you can’t dart it.

Mature Lystrosuchus resemble juvenile Ceratopsids, leading some groups of these creatures to even be adopted into Triceratops herds!

The first-ever Flock with a damaging Swap In Ability is here in the form of Lystrosuchus. These small ceratopsid look-alikes focus on dishing out damage as quickly as possible, after a not-so-good T1 option of only Cunning Strike. They can heal back with Evasive Restore, get out of tricky situations while crippling the opponent with Stunning Impact and Run, meaning you can potentially bypass any On Escape ability, and then get out to swap back in later! An interesting creature, as long as the stats are not too high for it to be unkillable!

The tiny Dreadactylus may not have the impressive size of its hybrid parent Dreadnoughtus, but they do seem to share some affinities! Flocks of Dreadactylus have been observed congregating in the air around massive Dreadnoughtus like plover birds on crocodiles!

Jurassic World’s tiniest and largest combine to fuse the Dreadactylus – a Flock focusing on inflicting Vulnerability with its Counterattack and then dishing out the big damage with its Impact and Rampage attacks! Group Decelerating Strike and Superior Vulnerability allow it to get the Speed advantage on its opponents, making sure that it will attack first each time. There is no way to restore Flock members on this creature, so be sure to use it wisely!

Though Giganyx’ vision is poor, studies by the DPG suggest it is very sensitive to flashing light, movement and scent! This may be an adaptation for nocturnal hunting.

Finally, we have Giganyx, the only Unique to be introduced in this patch. Giganyx looks to be a Fierce focusing on raw damage, and keeping the opponent stuck with it. Obstructing Fierce Impact and Crushing Alert Showdown will lock the opponent in with Giganyx, forcing them to deal with the big damage output this creature has with Fierce Rampage aided by Ferocious Restore. Crushing Alert Showdown will also speed Giganyx up, making this creature even faster. As it is listed as a Fast anti-Tank Tank, we expect Giganyx to have good Stats around the board, similar to Tryostronix, but then with more Attack and Health. The Resistances on Giganyx will probably also be amazing due to the Tryostronix lineage, but we don’t know for certain until the Patch comes out on Tuesday.

And that’s it for the New Creatures! What were your favorite new creatures? Let us know in the comment section or in the Discord server!