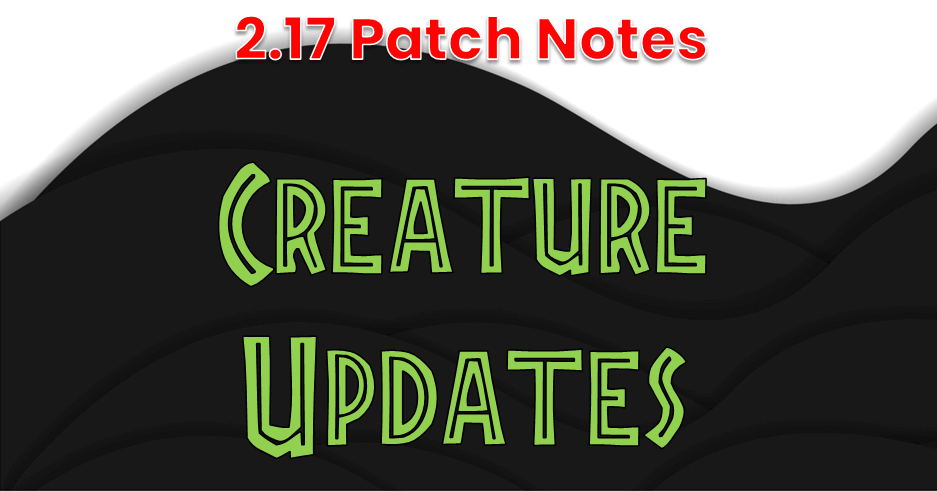 This article will focus on the Creature Changes! 2.17 brings six creature changes. One of them we already know, that being the Giganyx change, which was announced a few weeks ago and has already been implemented in the game. This leaves five more creatures, and Ludia has revealed the creatures that have been BUFFED! Some are more exciting than the other, with some of them even getting near complete reworks! Let’s jump right in and see what happened!

Tragodistis has received a lot of reworks in its kit in order to make it a better Flock-counter. This is achieved with Dispersed Superior Vulnerability and Group Decelerating Impact replacing their weaker versions Superior Vulnerability and Group Decelerating Strike, now also giving Tragodistis an Armor Piercing option to deal with Ankylodactylus. This also makes Tragodistis better in Raids, now being able to hit both the Raid Boss and the Minions. Tragodistis is now also a bit better at chipping away at the opponent due to the reintroduction of its Medium Counterattack. Finally, its Lesser Group Heal was changed with Shelter, which makes Tragodistis less of a team healer, but more of a support creature, as it Heals the lowest teammate for 2x the Attack value, and it also speeds up the healed creature for 30%! This change also makes Tragodistis better in the Arena, as it now has a better Heal to compliment its high Health and Armor stat, and a Speedup move on top of that, making it more capable of dealing with Flocks. With its high bulk and better offensive presence against Flocks, Tragodistis should be a lot better in Legendary Tournaments, which desperately need more Flock counters!

Tenontorex has also received a small tweak in order to make it a bit bulkier by adding a Devour effect to its Distracting Impact. It should help it a bit with survivability, but it will not make Tenontorex a proper force in the meta. If Ludia does want to make it better, it needs the Superiority Strike back, or Superior Vulnerability if Ludia wants to keep its Vulnerability aspect from Resilient Strike. Overall, a decent change that will help Tenontorex survive better, but we are not sure if this will help it become meta as much as Utarinex will be, our next creature to cover.

Utarinex is one of the most changed creatures in this Update, and this change might make it into a meta creature right away. It now has a Swap In damage attack from its component Dracorex, receiving Swap-In Resilient Strike. Coming off of Utarinex’ 1650 Attack stat, this gives Utarinex more damage than already prominent Swap-In damager Parasauthops, similar to Albertocevia! As for mobility, Utarinex received TWO new Running moves, with then being Distracting Impact and Run and Stunning Rampage and Run, the latter having a 100% chance to Stun, making it a vastly superior version of Lystrosuchus’ Stunning Impact and Run. With Swap-In Stunning Strike locking the user down for two turns, Utarinex can use both of the Running moves at the same time. It has also received a better version of Instant Charge in Instant Stunning Strike, which is basically Instant Charge, but without the Delay and with a higher Cooldown. But with Utarinex’ two Running moves, it doesn’t really care about this long Cooldown. With Utarinex’ frailty, this makes it balanced in the Arena, as it will not be able to tank many hits but dish out tons of damage while staying alive due to the Stunning and Distracting abilities in its arsenal. These changes should make Utarinex a very powerful creature that will definitely make it be used more often!

This creature got reworked the most out of all of the six creatures (well technically five if you exclude Giganyx) that were reworked this Update. It received Stat changes and move changes, and all of them were buffs. To start off, Diloracheirus’ Healing abilities changed in order to be more interesting, as its Lesser Group Heal turned into an Accelerating Team Heal, accelerating the team with 25% speed increase for two turns. Its Greater Emergency Heal also got buffed, changing into a Group Heal worth 2x damage, and also Distracting the highest damage opponent with 25% for two turns. This makes Diloracheirus a better option in Raids, and one that might be worth exploring to replace Tuoramoloch and Parasauthops in certain strategies. As for other changes, Diloracheirus received a Counterattack, Darting Counter. For each hit it takes, Diloracheirus receives 20% speed increase for 2 turns, and it deals 1x damage to the opponent. For a creature that now has 1650 attack, this seems like a giant threat to any opponent that does not have Armor or Shields. Diloracheirus also received a Health and Speed buff, with its 4350 Health changing to 4470, a very weird number if you ask us, and its 127 Speed changing to 128. This makes Diloracheirus a powerful opponent that can deal with many Fierce and Cunning creatures, but should still have major trouble with bulky Resilients such as Ankylos Lux and Skoonasaurus. It should become quite powerful in the meta, especially against the dominant Fierce class creatures that have been dominating a lot recently!

These changes seem very interesting! All of these creatures have received buffs that should make them more useful, with some receiving a bit more love than the others. Are you going to use any of these newly reworked creatures? Let us know in our Discord server or in the comments down below!