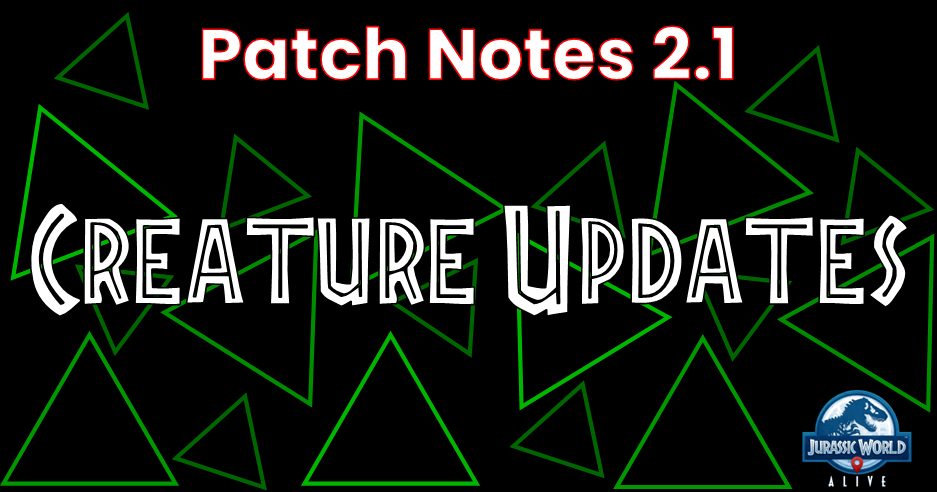 This article will focus on Creature Updates. Ludias goal from the start of 2.0 was to create a game with balanced creatures, but we all know how that ended in 2.0. There were a couple creatures that dominated the game, but Ludia has touched them and a lot more creatures in this Update. We will cover the main changes but also have a table for you to see how everything got changed. Without further ado, let’s jump right into the creature changes.

When you heard people complain about the Arena you might likely heard them mention this sauropod as well. Ardentismaxima was the bane of many people’s teams (including mine) and people all over called for a nerf, as there were just too little creatures that could counter it. These are the changes that Ardentismaxima got:

These changes are pretty big, but fortunately Ardentismaxima keeps its amazing movepool, retaining its double Rampages, Instant Invincibility Taunt and Resilient Strike. While these changes might seem like they are too harsh, we think Ardentismaxima is still a very potent offensive creature with its double Rampages, amazing Speed control and Defense Shattering abilities.

This creature was often seen as one of the big losers at the start of 2.0. Definite Shield Advantage locked behind a turn of Delay, a Health nerf, it not being Immune to DoT anymore, the Decelerating Rampage having a cooldown of 2 now instead of 1 – the list goes on. However as the weeks went and people experimented more with Geminititan people saw how it still is quite good. And it got even better. Not due to stat changes, but to tweaks to its moves that really make it amazing. If you want a proper analysis of the changed moves, you should go to our Ability Updates article, but I will briefly show it here to showcase what changed for Geminititan:

These changes make Geminititan the new best sauropod in town. It’s arguably better than Ardentismaxima now with more damage, better Distract resistance and a better Defense Shattering move. Group Invincibility will also be a key asset in Raids, as it will protect you from lots of damage for two turns. We will see how balanced Geminititan will be in the Arena.

Finally we have Trykosaurus and it got a small change that really made it lose a step.

Trykosaurus now cannot slow you down with its Counterattack anymore, making it impossible for it to apply a double layer of Deceleration on you anymore. Now its only Slowing move is Resilient Impact, allowing it to slow you down only every other turn. We think that this change balanced out Trykosaurus well enough for it to be brought down to the other Uniques. The small Attack buff it received to compensate helps it out with a couple of situations, but it will still be in line with other Uniques.

As part of the creature changes Ludia mentions that Cunning creatures were undervalued. They adjusted the creatures’ stats in order for them to receive some buffs that hopefully makes them more viable. Here is a list of all the changes that were made:

As you can see all creatures received a Health and/or Attack buff. We hope that this will allow these creatures to do a bit better in the Arena, as currently even Fierce creatures have a high probability to take them out. Cunning was clearly the worst of the three types and with this change it hopefully changes things for the better for them.

There are several other changes that were made. Some were just some stat tweaks, others received a bit more change.

Some noteworthy ones are Grypolyth, who received a change of its basic attack from Group Cleansing Strike to Fierce Strike, basically giving it back its pre-2.0 Defense Shattering Strike. Its attack also got buffed to 1100, giving it more Healing abilities that allow it to heal over 50% of its Health in PvP.

Another noteworthy one is Blue. Blue was reworked into a pure Cunning creature instead of the Cunning/Resilient creature it currently is. Short Defense got changed to Evasive Impact, it lost its 10% Armor, the Health got changed from 3000 to 2400, and it gained a 100% Resistance to Distraction. This makes Blue much more of a Cunning creature.

We also have Nodopatosaurus as a creature that got changed a lot. This creature got changed the most out of all creatures except Ardentismaxima.

Overall we think Ludia has done an excellent job at trying to balance the game. They have seen the comments the community has made on 2.0 balancing creatures and we are glad that Ludia has decided to change up some creatures. What do you think of the balancing? Let us know in our Discord server! Be sure to read up on our other Patch Notes articles as well!