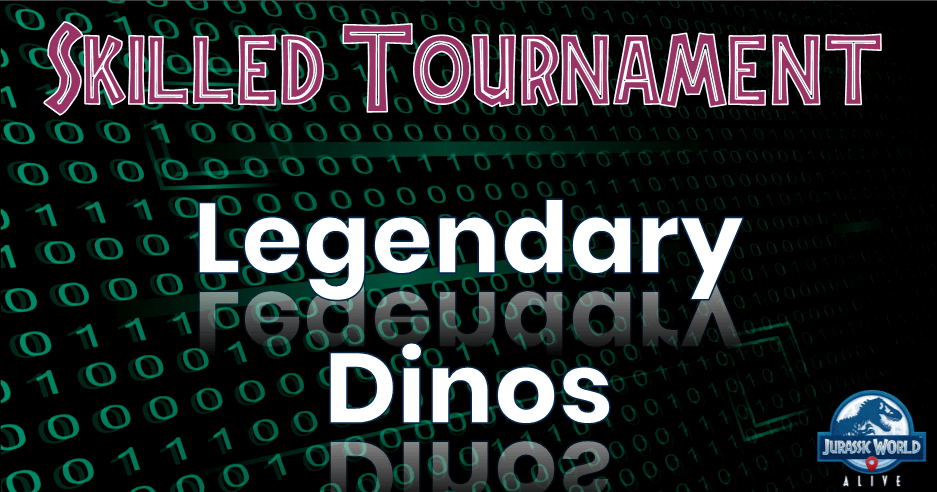 Hello again Explorers! we have yet another skills tournament this weekend and it will feature legendary dinos. Here are the details on it: 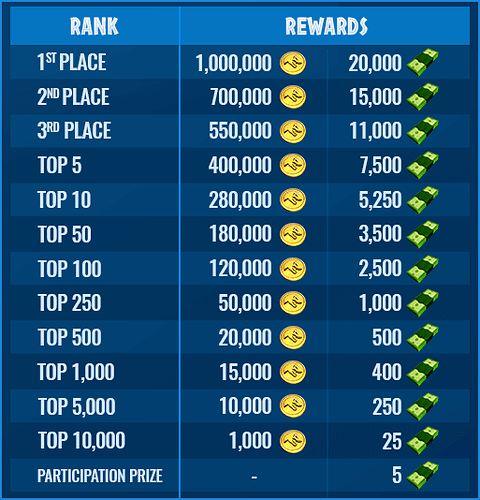 This is a pretty steep entry fee and you won't get that money back unless you place in top 5,000. That being said, this should be a really fun tournament with the chance to play with a lot of the newer creatures and play with some old Legendary friends that have been riding the bench for a while. The top prizes are also really good, so if you have time, it could be worth the grind! It's also worth noting that you can earn 80 HC through supply drops and alliance missions and daily missions.

Since this tournament is limited to one rarity, there aren't as many creatures available, but there are a very wide variety of creatures. In total, there are 37 different creatures you can play with.

To answer that we went back to our Battle Simulator tool and did a simulation of all legendary dinos against each other.

Before we reveal the results though, our usual disclaimer. This tool is a great way for us to see how creatures do in a 1v1 situation, but keep in mind we play with a 4 dino team. This is a new and updated simulator that we hope will bring more accurate results to our analysis. We have created a new field that analyzes swaps. In the previous iteration of the simulator, a dino that has a swap out move would perform that move but, stay in the battle and that could skew some of the results. Now, if a dino performs a swap out move the battle will end and a score is applied based on a complex formula we won't bore you with. In the image below, you will see dinos like Paramoloch that have a 0% loss rate and that is because they always swap out in the simulator to save itself and never technically die because the battle ends at that point. Swapping isn't a good or a bad thing as it solely depends on the course of the battle and what creature is being swapped in to. The sim still uses swap in moves about 50% of the time. So any creature with a swap in or swap out move may not show favorable and could still be a good option on your team. Y.

Because we love infographics, we created one to show the top 20 legendary creatures. Below each image, you will see the win (green), loss (red), and swap out (yellow) percentages. The swap-out percentage is when either dino swaps out of the match and the battle essentially ends.

So without further ado, here are the top 20 Epic and Legendary dinos ranked in order according to the simulator we ran: 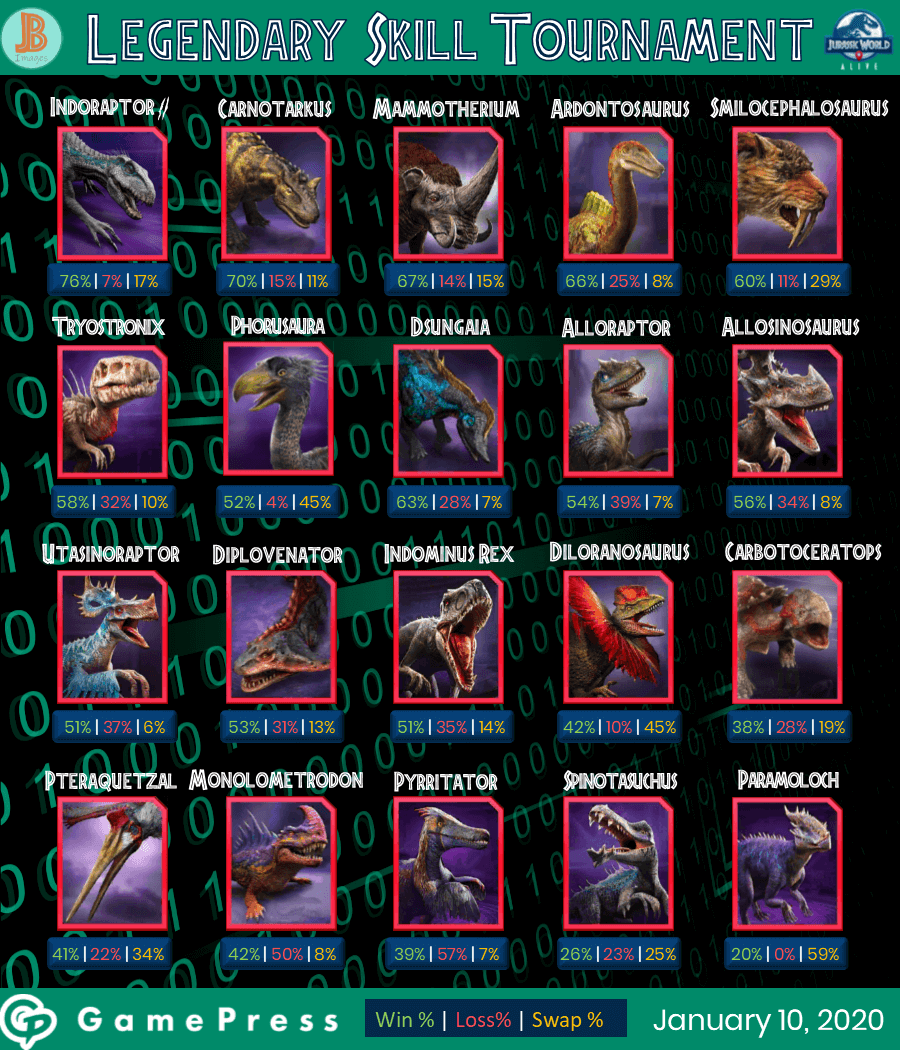 As usual, Dracoceratops isn't listed anywhere on the top 20 results. Since this dino solely relies on its swap in damage, it doesn't do well in the simulator results. The change to Swap in Savagery really changed the role this dino plays but it might still be relevant in this tournament (especially to deal with Indo2). Remember that the swap in does 40% of the maximum Health of the creature it is swapping in to. And it won't go through Armor or Shields. It could still work on something like a swap heavy team, but you might not be able to regen and get out of there as easily.

In addition to the new swap mechanics, we also implemented some additional data called "Win Quality". This is basically the percentage of health left of the dino that won. This is really useful information to see that while that certain dino might have a great win percentage, the HP is pretty low and it might be a setup opportunity for the next dino that comes in. Below are the Win/Loss/Swap out results for all of the creatures as well as the Win Quality.

First of all, don't just pick the top 8 and go with those. As we mentioned, the sim is a head to head match up visualization so there are plenty of dinos that work well on a team that may not necessarily be in the top 20. And some of them may just end up being set up fodder for the next dino (as seen by the win quality). Experiment and see what works best for you. Ideally, you want a diverse group so you need speed, armor, tanks and probably a couple of counter attackers as well.

2 of the top dinos are going to be found on every team and are going to be hard to deal with. Indoraptor Gen 2 and Mammotherium are a good combination of health, speed, and power and have very few true counters. There are so few counters, in fact, that we felt it necessary to include those from the Simulator results as well. These are the Legendary creatures that counter Indoraptor and Mammotherium by at least a 50% win rate.

Indoraptor Gen 2 is immune to distractions and stuns so you are going to need to slow it to be able to get a hit on it. And don't be afraid to use Mutual Fury either. This move is great to use when you are slower than your opponent (as long as you can take a hit). It will allow you to cleanse the slow, speed up, and hit your opponent with a 50% buffed hit.

Indoraptor Gen 2 only has 1 true 100% counter and that is Ardontosaurus. With access to Definite strike decelerating Impact and Defense Shattering rampage, it can remove hit through Indo2 evasive stance or cautious strike while maintaining speed control. It is also immune so it can't be bled and access to Instant Invincibility could also help it against other dinos such as Phorusaura as well.

Mammotherium's basic move, Persistent Ferocious Strike, allows it to hit you hard. Especially when it stacks. It also has a shielded speed up move with Dig In, as well as a shielded decelerating move in Bellow. So it can deal with a lot of different dinos in a lot of different situations. It also has an almost unblockable Definite Rampage. If you can't take it out in 2 hits, you are likely going to go down or have very little HP when it is done with you.

Mammotherium has 2 creatures that are 100% counters to it according to the sims: Smilocephalosaurus and Indoraptor Gen 2. The Deliberate Prowl/Pounce combo of Smiloceph can take out a big chunk of health and then you can rampage and run away and come back again for more. Now remember that Mammotherium has a rampage that will hit through evasive so there are some mind games with that matchup. It should also be noted that some RNG might be a factor in some of these matchups as well as far as crits and dodges.

Carnotarkus made a surprise appearance in the top 3. With access to a greater rending counter-attack and a precise rampage, it has the opportunity to deal some damage. Superiority Strike could also allow it to be a good counter to Indoraptor Gen 2 if played right.

With our new swap formula, Phorusaura moved up in the simulator where it deserves to be. This newly crowned Tyrant has swap in stun (which doesn't always work so it's best not to rely on it) and access to 2 rampage moves with Instant Rampage and Rampage and Run. Since it is immune to swap prevention, this one is actually a good one to bring out naturally. Even if you are slower you can get an Instant Rampage off and if they swap to something that isn't a good matchup for it you can run away.

Alloraptor also deserves a mention. It is immune to decel and can't be locked down thanks to its immunity to swap prevention. It has Definite Impact (although it has a cooldown) as well as distraction, pounce and rending takedown. Rending takedown will take out 60% of your opponent's health! So this is a great little damage dealer. It is almost a counter to Mammotherium. It might be if played right, but the Dig In move from Mammotherium will make it faster than Alloraptor

There are a lot of possibilities with this tournament and just because a creature isn't on the image or isn't mentioned above doesn't mean it won't be good. There are so many other good options we can mention, we just can't go through them all. With all the creatures there are to play with, feel free to change your team to suit your needs and playstyle. There will be a lot of variance in the top teams so go with what works for you, not just what other people are using. And make sure to practice! Some of these are newer creatures with moves you might not be familiar with. Grab an alliance mate and do some friendlies so you get familiar with the team you plan to run.

We are extremely excited about this tournament! I personally enjoy playing with the legendary creatures and the ability to try out some of the new hybrids will be really fun. Our discord has already been buzzing about their teams and what will be the best dinos to have. While the simulator isn't the end all be all, hopefully, it helps you get an idea of what dinos might be good to use. Since this is a skills tournament, all the creature levels are set and friendly battles will be a great way to practice. Try a variety of different dinos and see what works best for you. Most importantly, have fun! Make sure to join our discord to get in on the discussion as well!