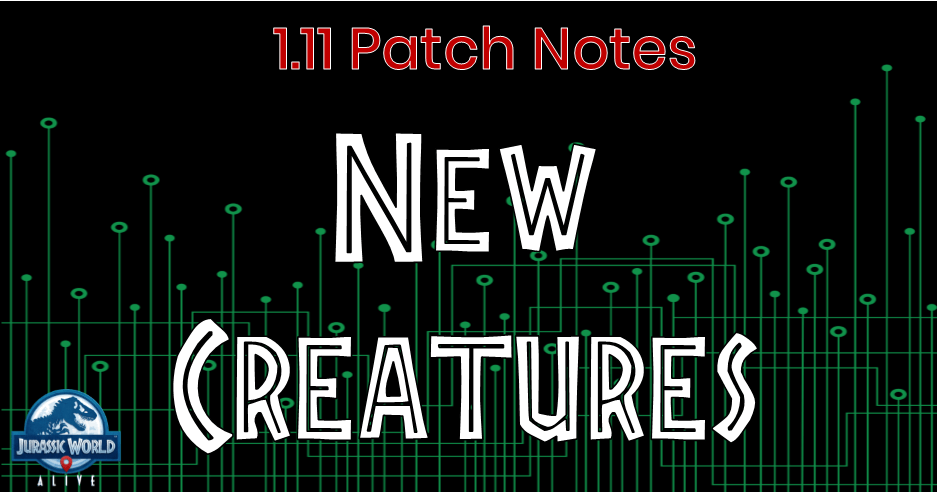 New creatures have always been my favorite part of a new update. New creatures to find, level, and create for the ultimate goal of completing the Dinodex. This patch we are getting 10 new creatures and hybrids!  So here is what we have to look forward to.

Bajadasaurus is a tall sauropod that is at her best when she can use her Superior Vulnerability before attacking with Devastation. With Swap in Heal, she can be swapped out for something else when she has taken some damage then swapped back in (in order to heal up and take another hit).

Bellow lets her gain Shields and speed control against faster creatures. Bajadasaurus has average damage, high HP, low speed, and is Immune to Damage Over Time.

Having a tank that is immune to Damage Over Time seems like a good creature to have on the team. Especially one with a 3x attack move! While this probably isn't something we see in late game, this could be a great option for newer players before they have hybrids. And this also has a hybrid that sounds like it's going to be just as good.

The Giant Deer interposes its panache in order to use its Shielded Decelerating Strike. With high speed and HP, it uses Swap In Heal and Dig In to Heal up and cleanse at opportune moments. For longer-lasting speed control, it can choose its Decelerating Impact to maintain the speed superiority for more than one turn. Megaloceros is Immune to Deceleration.

High HP and high speed? It sounds like a speedy tank similar to something like Tragodistis. Swap in heal sounds like a move that could be useful to tank a hit and then use Dig In to further gain HP back. It sounds like it might only have one real damage move (Decelerating Impact) so this might work best with a swap heavy team.

Woolly Rhinoceros uses its cavity tooth in order to pierce the opponent’s flesh with its Lethal Wound. It has high health, low speed, and average attack. None can get out of the way of its Definite Rampage. When it needs a leg up against a speedy foe, Woolly Rhinoceros uses its Decelerating Strike. Its thick fur makes it Immune to Damage Over Time and gives it a bit of armor.

Another high HP creature with immune to DOT. It can dish out its own DOT and with a basic move like Decelerating Strike, it can often keep priority over faster opponents. It also has a definite rampage move that will be vital in the new meta of dodging creatures we are seeing emerge.

Woolly Mammoth swipes its tusks in order to stoke its own fury with Persistent Ferocious Strike. It has high health, low speed, and a higher-than-average attack. Woolly Mammoth raises its trunk and unleashes a Bellow to initiate Shields and gain Speed control. Armor Piercing Rampage lets it get the advantage against armored foes. Its thick fur makes it Immune to Damage Over Time and gives it a bit of armor.

This is the creature I am most excited about (I am going to name mine Manny). It has a new move called Persistent Ferocious Strike (PSF), which will allow it to increase its damage by 50% for 2 turns. This might be a great stacking move for ultimate damage output. It also has a rampage move that will work nicely with the PFS move and it is also immune to DOT meaning you might want to bring a chomper to bring it down.

Mixing the genes of Allosaurus GEN2 and Delta, Alloraptor is a fast anti-tank creature that can use its Definite Impact and Rending Takedown to deal with armored and/or shielded foes. Alloraptor has 1350 attack, 3600 health and 127 speed. With Pounce and Distraction, it can take care of Fierce creatures that aren’t immune to distraction. While its speed does not compete with that of most raptors, Alloraptor is at least Immune to Deceleration. Delta’s special mobility trait emerges of the hybridization process as Immune to Swap Prevention.

It looks like the rest of the raptor pack will be getting hybrids this patch. With Delta fusing with Allosaurus Gen 2. The combination of a Definite Move with Rending Takedown could allow it to deal with a lot of the High Apex and Tyrant dinos that are causing havoc in the arena right now. This is the only hybrid we know actual stats for at the moment.

Edmontoguanodon is an even better tank with the addition of Bajadasaurus DNA. Trading Edmontoguanodon’s stunning abilities for Healing ones, Bajatonodon gains Swap in Heal and retains Regenerate and Run. It can also Bellow at the opponent to gain some temporary shields and longer-term speed advantage. Like Bajadasaurus, it is Immune to Damage Over Time and has the effective ability combo of Superior Vulnerability and Devastation. As expected, Bajatonodon has high health, average attack, and low speed.

I am so excited about the possibilities of this creature. Edmontoguanadon has always been one of my favorite hybrids and this creature will pair beautifully with a swap heavy team. It has the SV/Devastation combo that does so well on creatures like Carbonemys. And it has the ability to run away from a decent matchup. Average attack means that Devastaion move should hit pretty hard (especially if boosted).

Fusing Charlie and Erlikosaurus GEN2, this creature remains as cunning as its progenitors. Short of being stunned or taken out, nothing can keep Erlikogamma at bay with its Immune to Swap Prevention. It uses Precise Pounce and Rampage and Run to deal tremendous amounts of damage while relying on Debilitating Distraction to keep its opponent’s damage in check. When facing opponents of similar speeds, it can use its Minimal Speedup Strike to gain (or keep) its fast edge. Erlikogamma has higher-than-average damage, lower-than-average health, and extreme speed.

As someone who was actively working on Erlikospyx, it hurts to see Erlikosaurus Gen 2 getting another hybrid. And this one looks like a great option for an epic creature. Extreme speed should hopefully mean it is in the 130-131 range. It also has 2 different rampage moves with one of them having the ability to hit through Cloak or Evasive.

Combining the DNA of Woolly Mammoth and Elasmotherium, Mammotherium is an Anti-Tank Tank. With high attack, high health, and average armor, Mammotherium can duel against most armored and/or shielded foes thanks to its Definite Rampage. It can increase that powerful attack with Mammoth’s own Persistent Ferocious Strike. In between these offensive bursts, Mammotherium regains lost health and cleanses any impediments with Dig In and keeps the speed superiority with Bellow.

Honestly, this legendary hybrid sounds like a better version of Monostegotops (RIP Monostego). It has a similar move set, except it hopefully has a higher attack and the ability to hit through cloak and shields with Definite Rampage. It also has a slowing move with Bellow and a speed up move with Dig In. Overall, this seems like the next "swiss army knife" type creature that can deal with a variety of other creatures and matchups.

Add some Woolly Rhinoceros DNA to the Monolometrodon and you create the Monolorhino. Because two of its “ingredients” are common, Monolorhino can be a Unique for players who are below the Leagues in the rankings.

With average damage, high health, average speed, and a bit of armor, Monolorhino can defeat Resilient opponents with its Lethal Wound and Definite Impact. With the latter ability and Nullifying Strike, it can successfully deal with Dodgers. With Distracting Impact, it can deal with high damage opponents for a few turns. Thanks to its Immunity, Monolorhino’s speed cannot be reduced, giving it an edge in some matchups against slow speed control tanks.

We are excited to get another unique and this one seems like a great option for those in the lower arenas (look at it as a Magna with armor and bleed). It doesn't have a rampage move but has a diverse kit that allows it to deal with a variety of situations.

Mixing Diplotator and Scaphognathus results in a very mobile Scaphotator. With Swap in Wound and Swoop, Scaphotator is highly mobile and efficient at inflicting enough damage over time to take out a creature in three turns. Scaphotator boasts higher-than-average attack and health, and high speed. In between its arrival and its departure, Scaphotator has access to Regeneration and Distracting Impact. With Distraction, Scaphotator can reduce the opponent’s offense to zero (barring any Ferocious buffs), and set itself up to Swoop out a turn later.

The image for this dino shows legendary, but the text says epic so we arent 100% sure what the rarity will be. This also seems like the perfect creature to add to a swapping team. Similar to Pteravexus with a Swap in Wound and Swoop as well as a Distracting Impact. The addition of regeneration and a basic distract move should allow it to get out without too much damage being done or at least allow it to gain some HP back if you are able to predict a passive move from the opponent that doesn't do any damage.

To see what levels each of the hybrid components needs to be, we made a handy chart for you. Note that the image for Scaphotator is legendary but the text says epic so we actually aren't 100% positive on the rarity of it. We put the components at 10 just in case it is an epic as we wouldn't want anyone to over level it. If it is a legendary creature than Scaphognathus and Diplotator would need to be level 15. 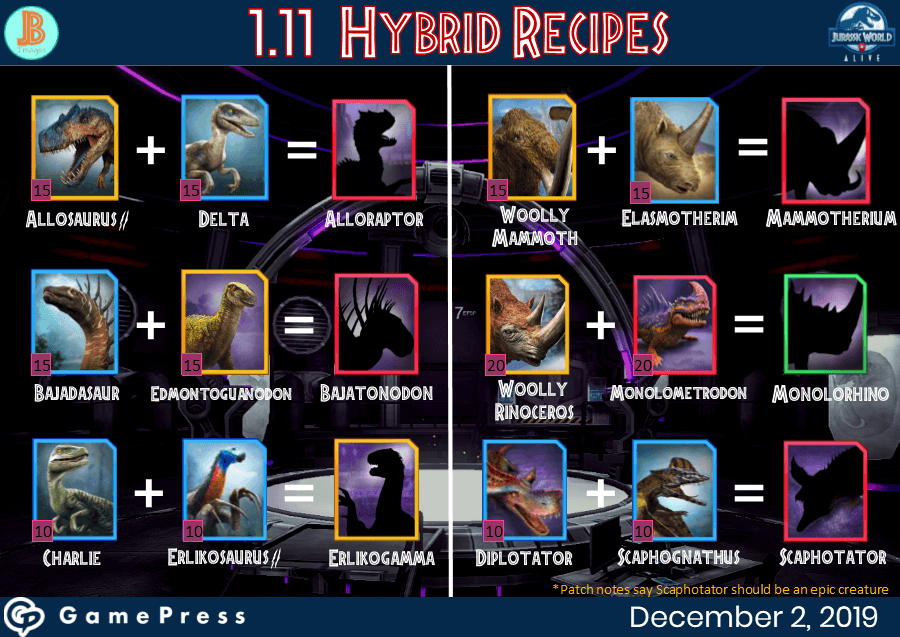 We are pretty excited about the new creatures this patch! They seem to have a variety in moves and move sets and I especially can't wait to see what they look like. I also hope they are easy to hunt for so we can actually get these new hybrids to team level quickly. Stay tuned as we will definitely have some follow up articles after the patch goes live with more information on how these creatures do in the simulation matchups and how best to use them in the arena. Make sure to follow us on Twitter and Facebook where we will keep you up to date with information, and join our discussion on discord as we talk about the patch notes and what it means for our teams and the arena!