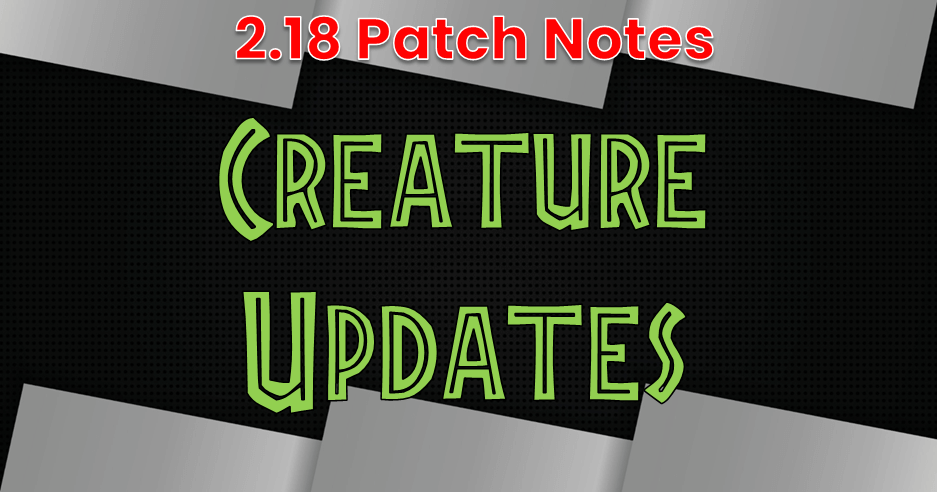 Explorers! Patch Notes for Update 2.18 are here and as always we have all the coverage on everything. This update is dubbed the Indonemys update. This article will focus on the various creature changes we will see as well as some spawn changes.

So it looks like all of the new creatures except Moros Intrepidus (which has a hybrid) will be huntable. We're also excited to see Brachiosaurus come back to the wild as well.

We will also see some new raids starting in October.

There are several creature updates this patch including some buffs to some old favorites.

Albertocevia has become a staple of many teams, due to its excellent kit and stats. However, it can be a little overwhelming with its wealth of options. Therefore we decided to lower its attack stat a bit, to make it more manageable.

This is a pretty small attack nerf so we don't think this will drop this creature off any teams any time soon. It might change some specific matchups but expect to still see this one running around the arena.

Our analytics found that Albertospinos was overall performing worse than expected, especially compared to its Albertocevia sibling. Therefore we are increasing its attack to more meaningful levels, as well as making its passive a bit stronger.

This is a buff to Albertospinos but we don't see that it really changes its role in the arena. We'll have to see what happens when the patch goes live, but we don't think this will really make it that relevant.

Dsungaia’s current kit suits it well, but its stats needed a solid upgrade. We’ve increased its attack by a little and its durability by a lot, while also giving it some new and improved resistances.

I remember when this creature was one of the creatures to have in both the arena and the tournament. Ever since the update where it got the decel counter, it lost its usefulness. But Dsungaia lovers need not fret, because this creature is back to play. Dsungaia is now an absolute beast. It originally struggled with bulk, but with this big hp increase, that is obviously not a problem anymore. This buff, as well as the other buffs coming up are really putting a strain on all the flocks present in the legendary format, and we aren't complaining. However, watch out for this stegosaur as it's looking like it'll make a huge comeback

This early hybrid creature has fallen out of style recently and has lacked a proper identity in the JWA meta. We’ve reworked its kit to better counter flocks, as well as updated its stats for use as a more offensive tank.

We have been asking for another legendary flock counter and boy did they deliver! We think Gigaspikasaur is going to be a force in tournaments especially. The combination of a huge HP buff, attack buff, a group rampage, and a 1x precise counter attack will make this creature tough to take down without taking a lot of damage yourself. It will also get resistance to distraction and vulnerability making it even more difficult to bring down that massive HP without a rend or bleed creature. We are excited to see this OG creature get some love.

Glyptoceras’ stats don’t fit a modern creature of its rarity, causing an inflated loss rate. We’ve made a general buff to its stats to make the creature more effective in battle while maintaining its current identity.

We were really hoping to see Glyptoceras become as relevant as something like Fukuimimus given its continental creature exclusivity. While the small buff is nice, we don't really think it's enough to put it on par with the other legendary continental hybrids.

Like Gigaspikasaur, Nodopatotitan’s kit was outdated and needed some sprucing. We’ve revamped its kit and stats to make it even more bulky, truly be worthy of the name “Titan”.

Nodopatotitan also got a much needed buff and could become something to use in legendary tournaments, but we still think Gigaspika is the better option of the 2. The group impact and .25x precise counter will help with flocks and it looks like it has a healing move as well that will heal 20% of its HP when used. It didn't get as big of an HP and Attack buff as Gigaspika did, but we still think it'll be another good flock counter option.

After release, Rinchicyon had trouble finding much of a place in the Legendary meta, especially with the flock infestation. Therefore we’re sprucing its Fierce Impact to a group attack, bolstering its effectiveness in Flock matchups and Raids.

Rinchicyon is similar to Glyptoceras where it just isn't on par with what we think legendary continental creatures should be at. Having a group move is nice, but we don't think this is enough to really make a place in the meta. It also doesn't have a way to hit through dodge so we don't see this creature as the best flock counter, but it is better than it was originally.

Tarbognathus has been terrorizing other legendary creatures since its implementation, especially in Tournaments. This tiny terror needed to be scoped down slightly to make it more manageable by opponents, so we’ve reduced its damage a smidge.

We think this is a fair balance to this creature. 100 attack will make it a little less overpowering but it'll still be able to compete where it needs to.

We are really excited to see some of the changes to older creatures and can't wait to see them in the tournaments. We also think the nerfs are fair and balanced and won't push anything out of the meta so hopefully, people won't feel like they spend resources in vain. What do you think about all the changes? Head over to our discord and let us know!