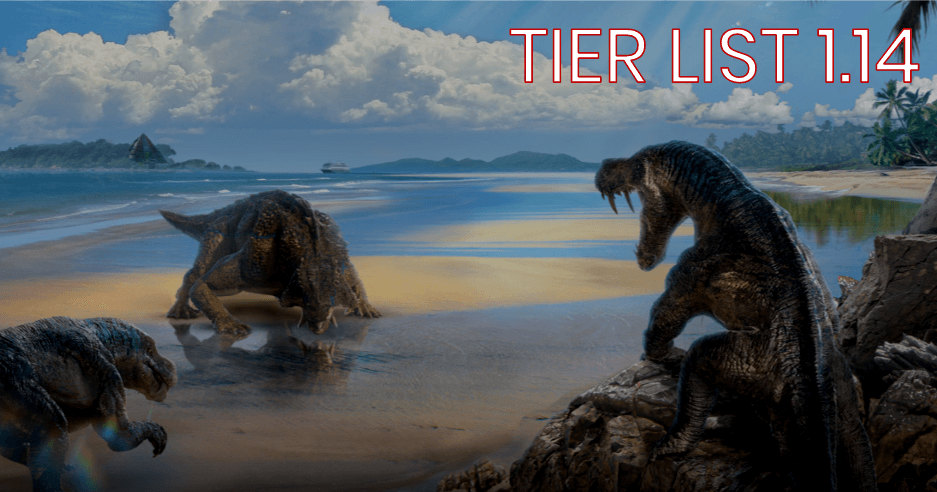 We are extremely excited to be done with Tier List 1.14! This wasn't as difficult as previous patches but as always we had our trouble maker creatures that caused much discussion. Before we share anything, however, we need to thank all those involved in the tier list!

And our celebrity squad of PokefodderYT and MattE from the JWA Field Guide App.

We truly wouldn't be able to do the tier list for the community without all of the people involved. We don't always 100% agree on everything (cough Yoshi cough), but we try to bring in a diverse group of people that will give the best analysis of the dinos and where they should fall. So let's get to it!

There weren't a lot of significant changes to creatures this patch so we only voted on Apex and above as well as any that had any changes (like Definite Rampage moves) and new creatures. There were options for write-in creatures if someone felt something needed to be brought up that wasn't on the initial votes. As mentioned above, once we tallied all the votes, the creatures that had less than 65% majority were put on the contested list. We have 75% as the threshold for the Tyrant tier as we feel like that tier in particular needs a large majority of voters to agree on it.

The table below reflects the initial contested creatures and how they were voted. As you will see later, many ranks change dramatically after the initial votes.

High Tyrant was completely uncontested this time around just showing how incredibly powerful these 3 hybrids really are. In fact, Geminititan had a 91.3% Vote to High Tyrant so it was almost unanimous. As always, there were other creatures that came up early, often, and repeatedly. We won't go over all of the creatures that changed tiers, but a few of the most hotly contested or most discussed ones were Thorodolosaur (we seriously can't get away from this one), Procerathomimus, Mammotherium, and Stygidaryx.

Thor has become a bit of a four-letter word in the eyes of the tier list participants. As you remember it dropped down to Mid Apex last patch and people were not happy about it. GamePress stands by the placement though as we still believe Thor is one of the most annoyingly boosted creatures out there and when you are constantly losing to the same creature in the arena it's hard to think of it as Mid Apex. But as we always base our list on unboosted creatures, that is where most of us still feel it falls. We aren't going to lie, most of us were pretty much burned out by the Thor debate. We discussed in full last patch and not much changed for it this patch. We still had some discussions but we made the decision to bring it to votes pretty quickly as we didn't want another 12-hour discussion as we've had in the past.

The votes weren't as close as last time as we had 6 people for High Apex and 17 people for Mid Apex. So for once, Thor doesn't move, but I will give credit where credit is due to the people who want it to raise. They are a determined bunch and would like it known that they are 100% against it being in Mid Apex. But we still love them.

Yoshi was another creature that many people were not happy about the drop. We still had a very divided camp when it came to our tier list group and spent a lot of time analyzing data and figuring out how to analyze the data to get our respective points across. We still believe Yoshi should get its own tier as it really is right in the middle of Low Tyrant and High Apex. What was ultimately decided is Yoshi does very well in many 1v1 situations but once it uses up its Rampage move, it has to wait for 2 more turns before it can get a big hit in again. And with armor, immunity, and evasive bypassing abilities available on so many of the Tyrants, Yoshi just couldn't last as long as many of them. The debates got heated (what's a tier list without a heated debate) and once again we left it up to the majority vote.

The votes were tied for quite a while, but a couple of people were persuaded otherwise, and it was ultimately placed in High Apex with 14 votes. Low Tyrant had 11 votes. Please note that just like last time, we still think this is an incredibly strong creature and while we don't rank each tier, we can all agree that it is probably the strongest in High Apex.

This was another tough one for us. Mammotherium is no doubt a strong hybrid, but the change to Definite Rampage (2 turn cooldown instead of 1) hurt it more than the hybrid it creates, Mammolania. It still has the stalling ability, but since it is still vulnerable to stuns, slow, and distract, it can't keep taking down creatures like it once used to. It is still a very viable end game creature and is best used late in a match. But once the Definite Rampage is used up, it's often a sitting duck to whatever comes out next allowing that creature to possibly set up on it. We think because of all those reasons, it isn't quite Tyrant material anymore and therefore dropped down to High Apex.

Daryx took a surprise leap last patch and while it didn't receive any direct nerfs or buffs there was questions about its High Apex status. Daryx is a very niche dino, as are many of the Mid and High Apex creatures. It does very well against a specific group of creatures (like Grypolyth and Diorajasaur) but still struggles immensely against many of the other High Apex and Tyrant creatures that are immune or can't be bled. It still has incredible versatility on the right team and now that Cautious Strike doesn't cleanse, it is a viable Indoraptor Gen 2 counter. The vote was extremely close on this one with 10 people voting High Apex, and 11 people voting Mid Apex. So we were pretty much torn right down the middle with this one with Mid Apex barely edging out the others.

We also know that with all the changes we are expecting next patch (based on the "teasers" we have seen so far) this list might look completely different in a couple of months. We can't wait to see what changes the next patch brings and hope it's the big shake up most people are expecting. 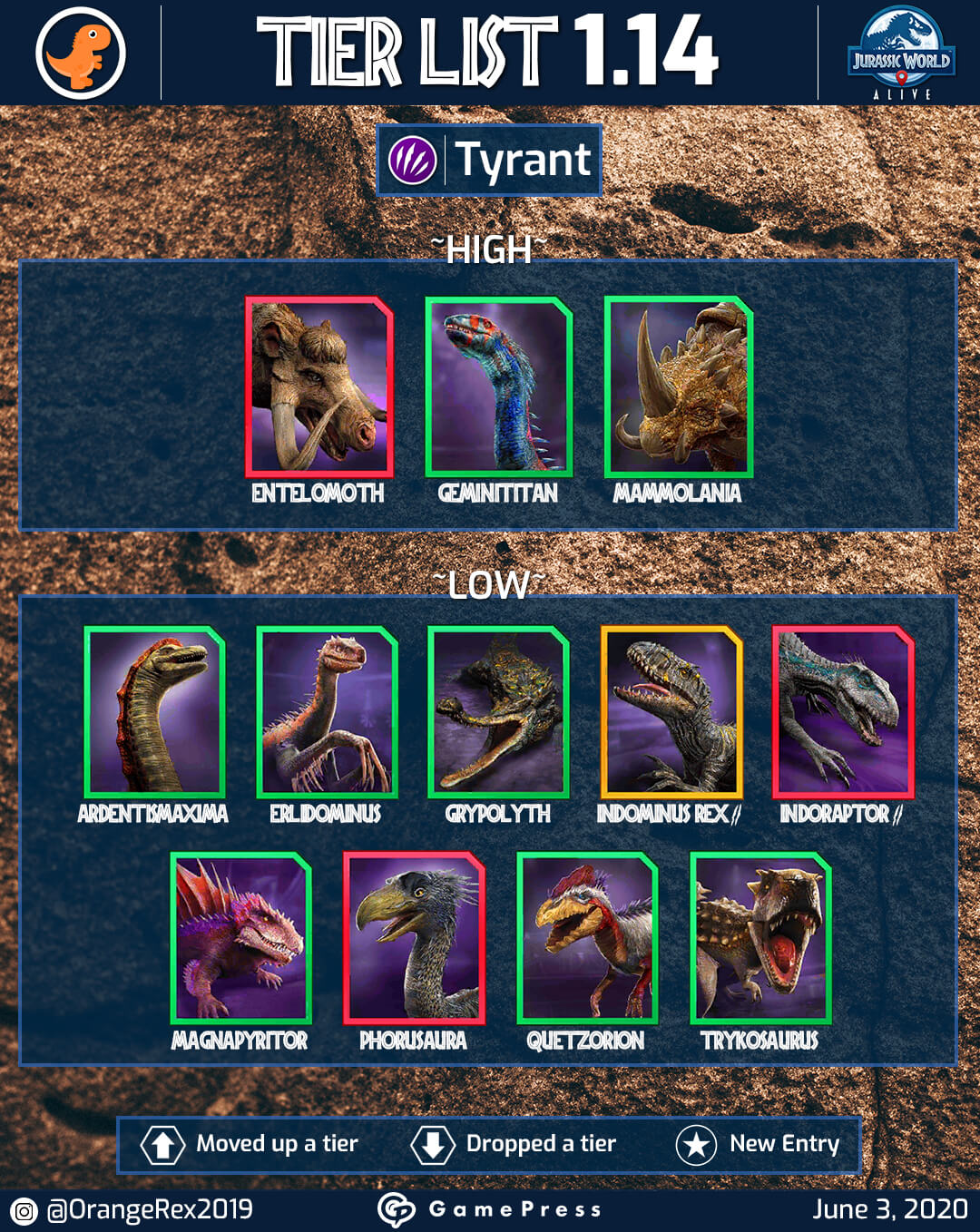 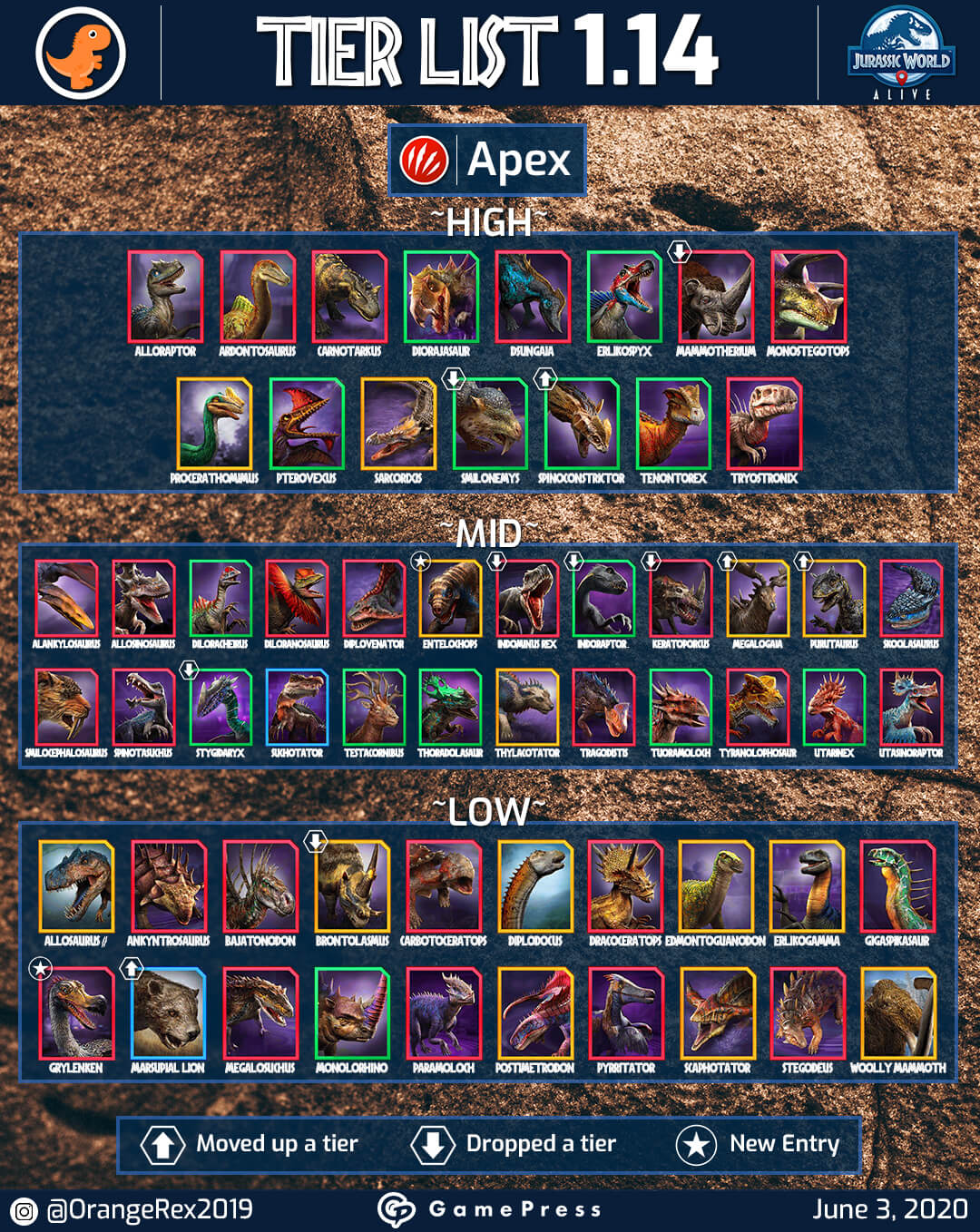 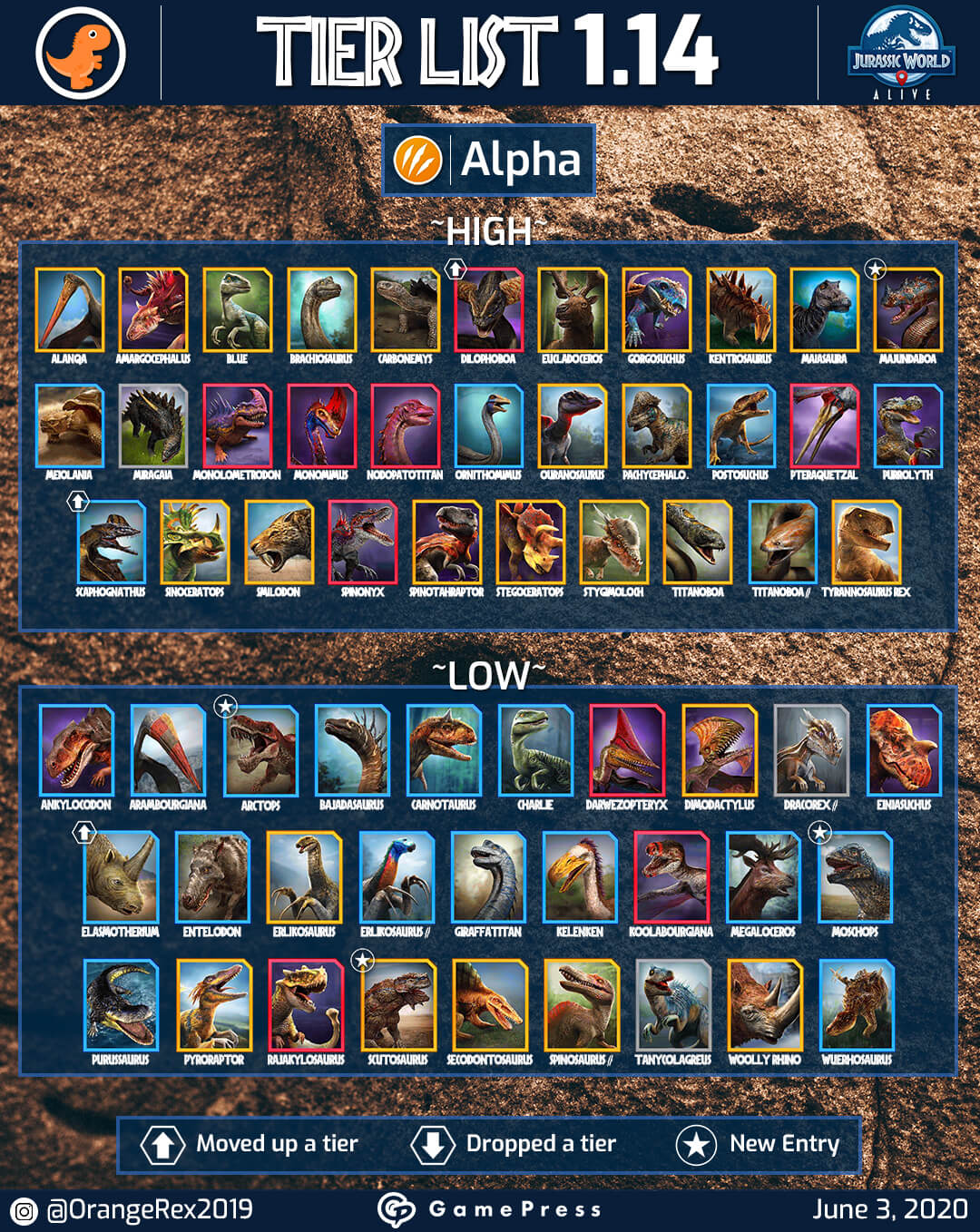 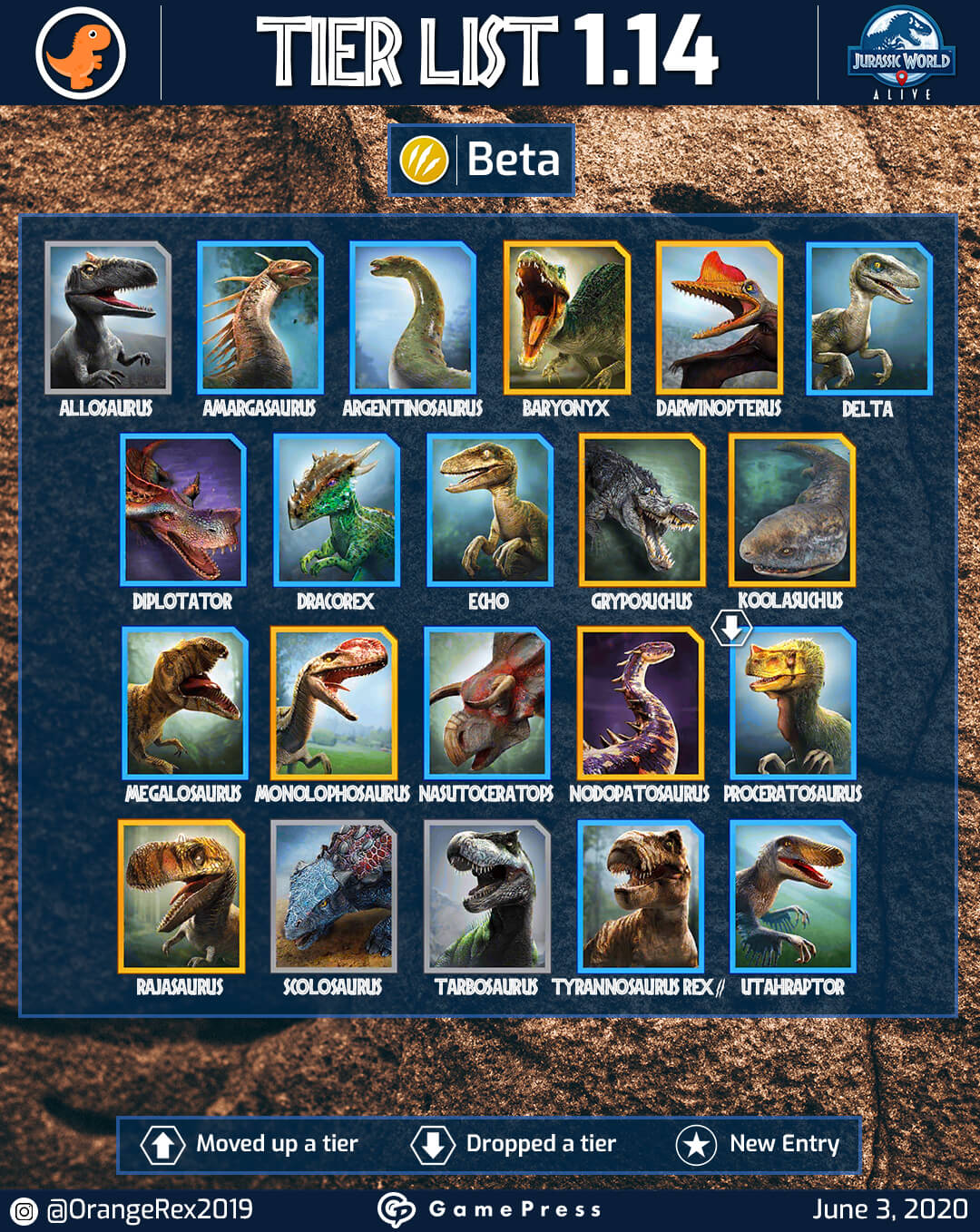 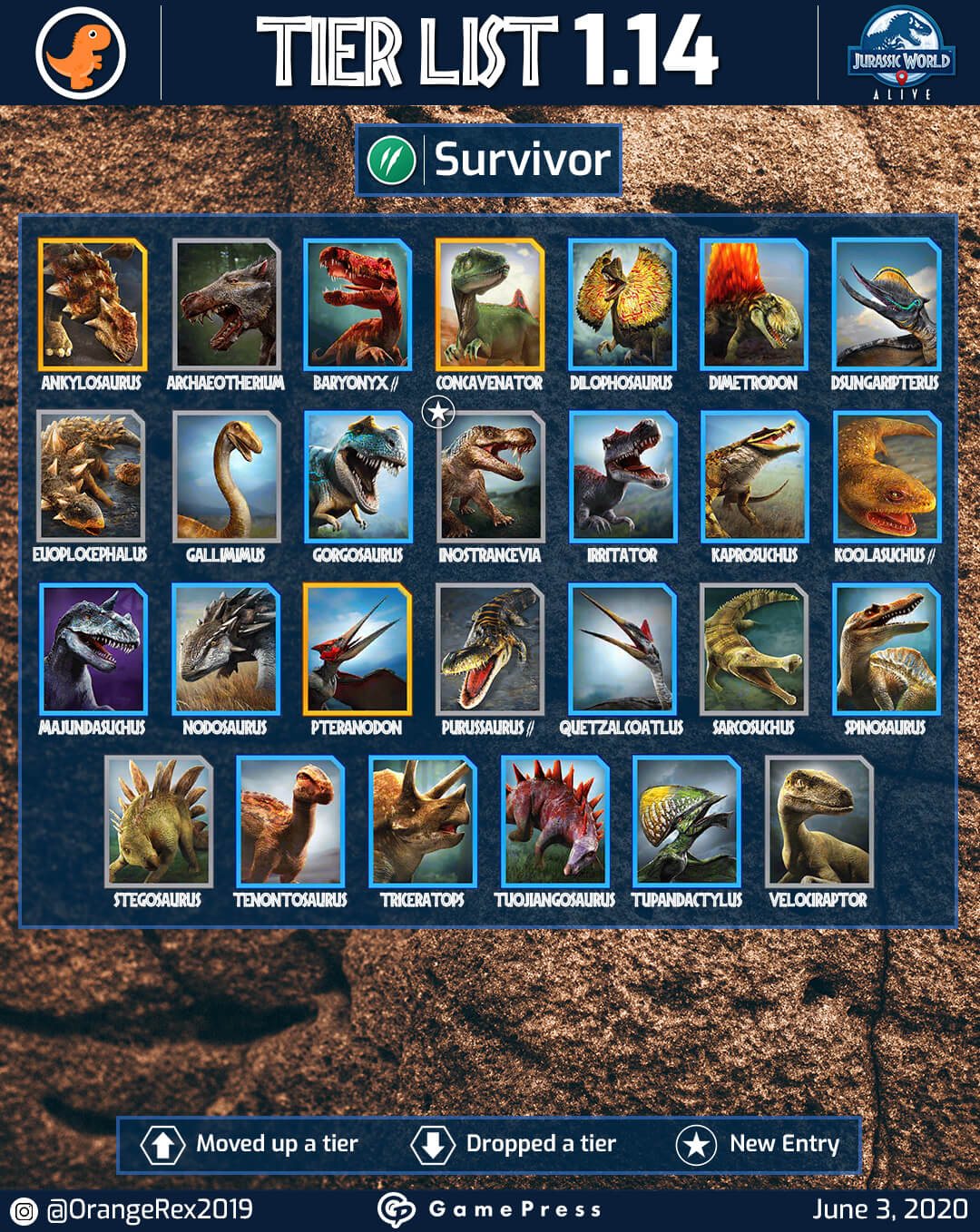 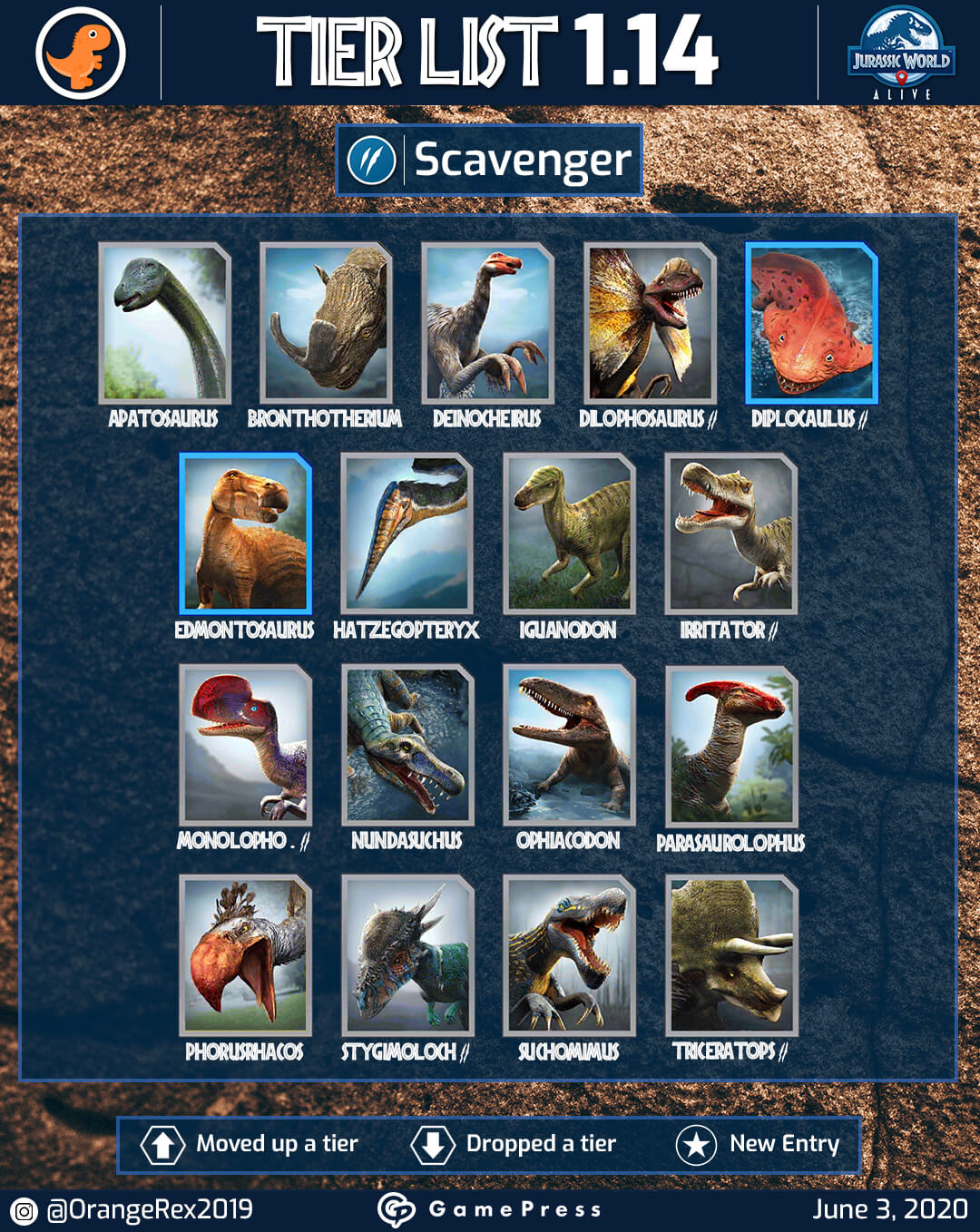 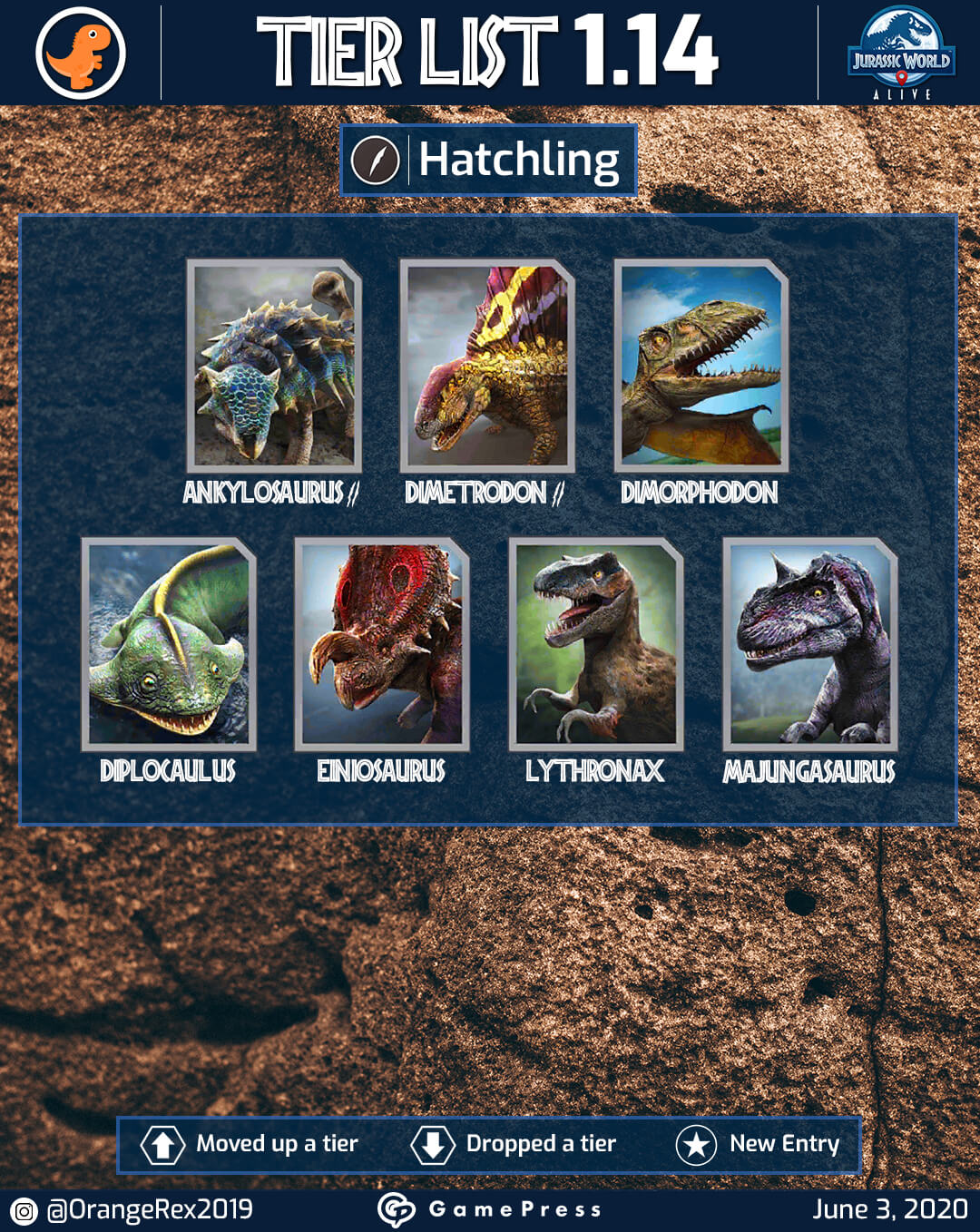