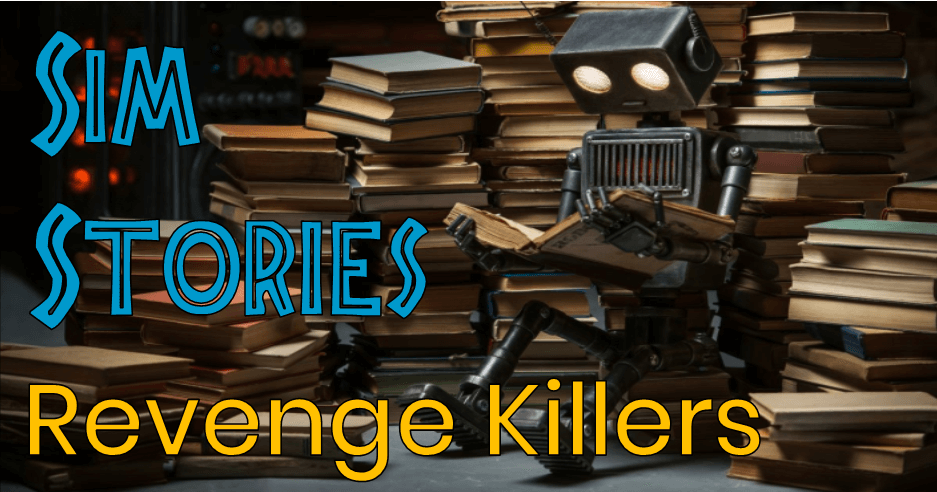 Hello!  Welcome to my new (hopefully) regular series, Sim Stories!  Here I will select a specific topic and use the amazing Battle Sim created by the amazing Matt to analyze it.  This could be ranking creatures by some metric, tweaking stats, or maybe even creating all new creatures!  For my first entry, I want to take a look at one of my favorite parts of battling: Revenge Killing.  Revenge killing is when your opponent kills one of your creatures and you send in something that can easily kill their now weakened creature as revenge.  The idea is that now your revenge killer is has all its most powerful moves ready to take on the next creature with no health lost.  Now, the simulations used to create the tier list are for 1v1, so we need a few additional rules so that our data reflects the situation I've just outlined.  Let's define those now.

First of all, I just want to say how amazing Matt is for setting this up.  As we were creating these rules, we kept realizing more and more things needed to be taken into account.  Some of those things weren't possible at the time, but he whipped up the functionality we needed in no time!  Here is what we ended up with:

Here is the scenario these rules represent.  Your creature was just killed, but the opponent's creature was weakened.  You send out a creature that finishes them off in a single move.  This move is assumed to be the creature's basic move OR a self buffing move.  It is also assumed that your creature can finish their creature off before it can do any damage or debuff your creature.

Here are the 20 creatures with the highest win percentage according to the rules we just defined:

As you can see, these results indicate the move used to kill the previous creature.  That means these results are ONLY valid if that is the actual move you used to get the revenge kill.  If you use Critical Impact with your Utasinoraptor to get the revenge kill, you're likelihood of beating the next creature will be different than what you see here.  You'll also notice speed is included in these results.  That's because in reality, slower creatures don't make good revenge killers.  The scenario we set up assumes that your revenge killer took zero damage or debuffs from the previous creature.  99% of the time, this means that it was faster.  So while I've included all the results for clarity's sake, I'm only going to be analyzing the creatures with a base speed of at least 124.  Why 124?  That's the speed of Tryostronix, which is what many consider to be the definition of a good revenge killer.  I had to draw the speed line somewhere and that's where I drew it. 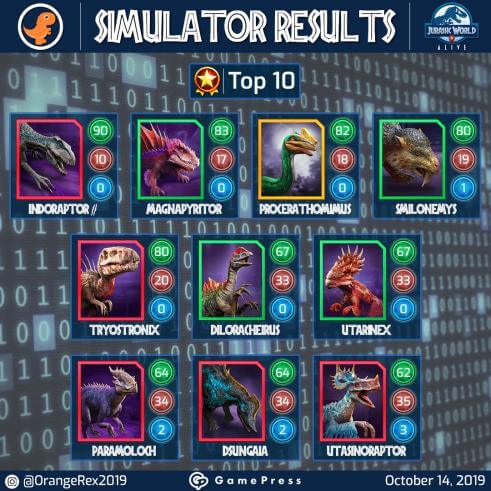 The first 4 creatures in the 124 and over bracket are no surprise.  They're already in Tyrant tier and worth considering for an endgame tier based on that alone.  What I'm really interested in the the lower tiers that are at the top of the revenge kill list.  These are the things you might want to consider on your team specifically for their revenge kill potential.

Of those, it's no surprise that Tryostronix is at the top.  The buff from Ferocious Impact sets it up perfectly for a massive Defense Shattering Rampage against the next opponent.

Next up we have Diloracheirus.  The introduction of more immunities in 1.9 were a big factor in dropping it from Tyrant to High Apex, but you'll be happy to know that access to 2 Rampages keeps it very high on the list of revenge killers.

Utarinex is one that I'm going to have to place an asterisk next to.  The sim doesn't really handle fleeing abilities very well and so Utarinex's performance might be a little skewed as a result.  Utarinex users tell me it does in fact perform well in this role, but make sure you take that into account when using as a revenge killer.

Number 8 is the one I think is most interesting.  Coming up all the way from Low Apex is Paramoloch.  I was ready to give Paramoloch the same asterisk as Utarinex due to Regenerate and Run, but then I looked at some of the battles from the sim.  Instead of abusing Regenerate and Run, it actually loses the match most of the time when it uses it too early.  So while I'm not going to say the sim is 100% accurate here, I do think Paramoloch is up there.

Next is Dsungaia, but only when the revenge kill move was Shielded Decelerating Strike.  This is a bit surprising since the other option was Ferocious Strike and that buff is what took Tryostronix to so high on this list.  When Dsungia starts with it, it actually lands a full 10 percentage points lower in the list.  Sometimes the best offense is a good defense.

So what else can we take from these results?  Let's go back to those 4 Tyrants at the top of the list.  These all happen to also be at the top of the 1v1 list, which makes the great leads.  Now let's take one, Magnapyritor, and compare it to another good lead that's not on the revenge kill list: Erlikospyx.  Erlikospyx has a worse win rate as a lead than Magnapyritor.  Erlikospyx also has a worse win rate as a revenge killer than Magnapyritor by a much higher margin.  So even though Magnapyritor is the better lead, Erlikopyx is an abysmal revenge killer.  This means if I had to choose between the two at the very start of the match, I'm probably better of choosing Erlikospyx because of its more narrow role.

That wraps up my introduction into Sim Stories!  Looking into all this data was really fun.  I hope you found it as interesting as I did.  As always, remember that these are only the results of a mass simulation and your actual experience will depend on the actual creatures you encounter in the arena.  This list can't tell you who to choose as your revenge killer in the heat of the moment, but maybe this will help you decide on that last slot on your team.  If you have any suggestions on something you'd like analyzed next or just feedback on this series in general, be sure to find me on our Discord server and let me know!