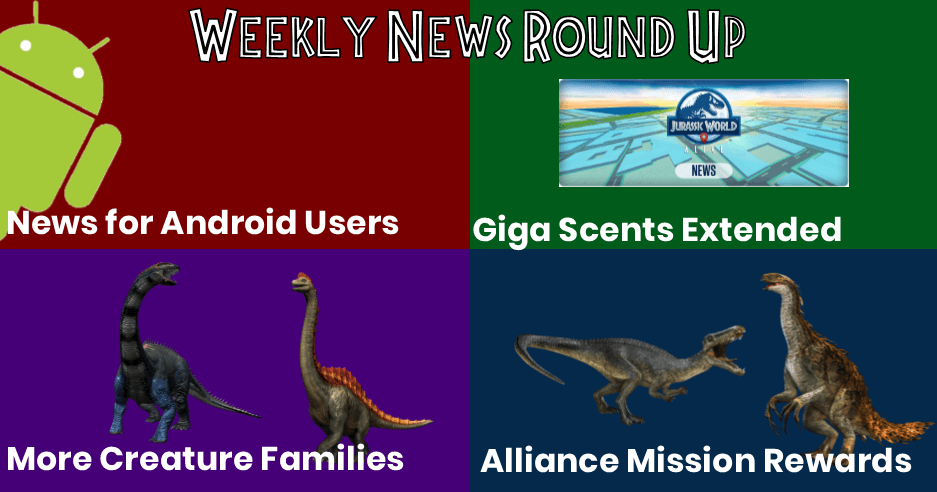 Hello Explorers! I hope you have been able to collect a lot of Titanoboa DNA this week! It's currently out on pursuit so you have until Monday reset time to get out there and get it! Next week we will have Dilophosaurus Gen 2 as the pursuit creature. In other news this week: There will be new Alliance Mission Rewards on Monday, more Creature Families have been announced, Giga Scents are being extended again, and there is some important information for anyone running the game on an older Android device.

JWA Update Update: What we know and Speculation!

We have our next set of alliance missions announced and we are pretty excited to see some of the creatures that will be featured.

There is already some hype about Erlikosaurus and Irritator DNA being featured as they are needed for some very powerful hybrids in Erlidomnius and Magnapyritor. Overall they aren't bad mission rewards.

They announced 2 more creature families today in addition to the 5 that have already been teased so far.

Here we have the Sauropods family!

The list of possible abilities is as long as these creatures’ necks! For one, this powerful group will alter your opponent’s pace when you use the Area of Effect Speed Control abilities. The Sauropods will also wreak havoc when using Area of Effect Damage!

This strong family consists of: 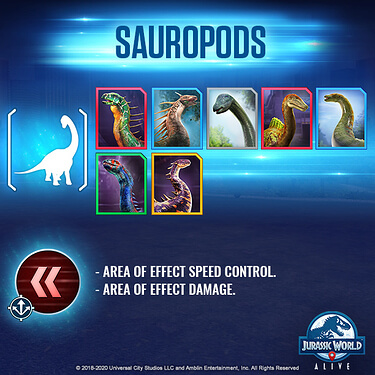 We’ve got another fierce group of long neck creatures for you! The mighty Brachiosauridae will tease and beat your opponent with High HP Taunters. Your opponent will try very hard to beat this family, but this group will remain undefeated by using the Shields and Speed Control!

This mega family consists of: 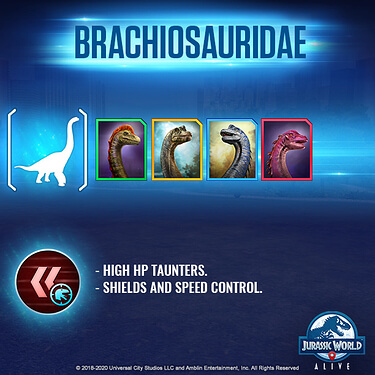 People were quick to point out the lack of Diplodocus and Bajadasaurus in these families, but it looks like they aren't included for a reason. When asked why certain creatures aren't in the family an official Forum Support staff said the following:

Dinos who are in those families but not on the list means that they won’t be gaining the co-op abilities.

We still don't know if these changes will only be for PvE or if they will also affect PvP arena as well, but it sounds like some creatures won't have co-op abilities at all. We can't wait to see more families, and we are loving the sneak peeks they have been giving out.

As the COVID situation continues to affect players around the world it looks like Ludia is taking it a couple of weeks at a time regarding their response and the in-game perks we are receiving as a result.The last announcement said they would be extended until June 15th (which is Monday), but it looks like they have extended it once again until June 30th. Posting on the forum:

We hope everyone is staying safe during this time. As we have previously mentioned, Jurassic World Alive is adjusting the game to make your playing experience a good one from home. Here are some of the new changes:

We are really enjoying the Giga scents especially and hope we get an Entelomoth pursuit soon so we have even more chances to get out there and get that Mammoth DNA!

In a gear up for the next update, or simply because of performance issues that have been reported, Ludia announced today that they would no longer be supporting Android devices that are 5.0 and below:

Please be informed that Jurassic World Alive is increasing the minimum supported Android OS version to 5.1 and will cease support for older Android devices (5.0 and below) effective immediately.

While we continue to focus on optimizing and developing new features for the game, we highly encourage all our players to update their operating system or log into their game on a supported device so they can continue playing as usual.

If you are currently playing on an Android device running 5.0 or below, you can contact our support staff at [email protected] with your Support Key to transfer your Guest account to a supported device. Our support team will be there to assist you in any way they can!

To check and see what version you are running you can go to Settings > System > About Phone (thanks Magnarock from the forums for this info). As long as it is 5.1 or above you are still okay to run the game. If you have a device below those minimum requirements you won't be able to operate JWA on it anymore. It seems that Android 5.1 was released in early 2015 so as long as your phone model was released after that, you should be good to go.

As always we'll continue to keep you update as we know more information about the upcoming patch and boost reset. Meanwhile we'll be busy in the tournament getting those alliance points so make sure to send us a GG if you meet one of us! And make sure to join our discord for more discussion and the most up to day information in the world of JWA!