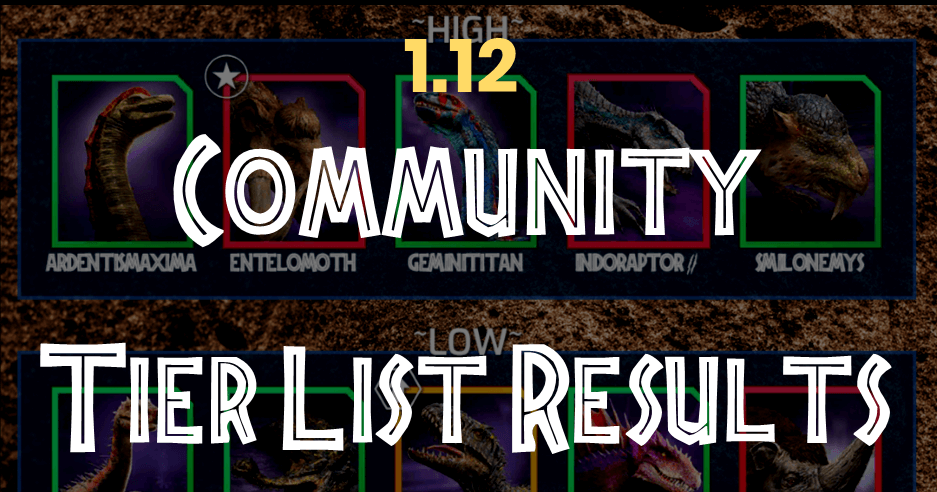 Explorers! We are excited to bring you the 1.12 community tier list results! We did things a little differently this time around. Instead of doing the community tier list vote after we had released our official one, we had you vote at the same time as we were working on ours! This was to help get a real view on where the community thinks creatures should fall without the bias of our list already being published. We also did not disclose these results or use them during our discussions so we wouldn't be biased either. Make sure you click the link below to read up on how our tier list discussions went. The idea behind the community tier list is another way for you to show your thoughts on where you think creatures should fall. We love our community and we love the opinions you have. We can't let everyone actually participate in the official discussions so this is our way of letting you voice those opinions. We appreciate every person who completed the survey and we also read every comment that was made.

As mentioned above, we actually had you vote at the same time that we were discussing ours. We also changed things up this time around as we decided to split Tyrant tier into High and Low Tyrant so everything that was Tyrant needed a new spot. Most people didn't vote on anything past the Apex tiers so we aren't going to include Alpha in the list below (even though it was in the survey). So without further ado, here are the top Tyrant and Apex tiers for 1.12 according to the community!

In our normal tier list, we pull the results and look more closely at the dinos that did not get a 65% majority vote. Those dinos would be considered "contested" and we would put them up for discussion. Then all 30+ people involved in the tier list would discuss why they thought dinos should be in a specific tier. According to the community, the following dinos would be on our "contested list" and would be up for discussion.

Breaking down the Dinos

Based on the list above, we would normally put these up for discussion and spend a lot of time trying to figure out where they should go. Sometimes they stayed and sometimes they moved. Obviously we can't get all of you together to discuss all of them, but we will acknowledge that there are some dinos that you think need to be moved.

And if you notice, many of the creatures you didn't agree with, were ones that we spent a LOT of time talking about. Things like Tuoramoloch, Utarinex, Utasinoraptor, and we can't forget Thor. It looks like you agreed with the democratic majority on Thor being High Apex, however. The community Mid Apex tier was also quite large. We actually did a total re-work of that tier and had multiple votes and discussions on it, so that is why you see so many differences in it.

Other notable creatures are the new hybrids such as Spinoconstrictor and Dilophoboa. We placed them much lower than the community voted for. And there are still discussions on our discord about Spinocontrictor in particular. While we like the idea of these new hybrids, in most cases they were too situational to be effective in a majority of matchups. Dilophoboa, in particular, was very disappointing in the friendly battles we ran and just dies way too easily. We hope the snake hybrids get some reworks to make them more viable in the arena, but right now we just don't see them as high as you put them.

It's also important to note that the official GamePress tier list is based on no boosts and all equal levels. But we also understand that doesn't 100% reflect the actual arena. And each arena has it's own little "mini meta" where a dino that doesn't do well higher up can be absolutely wrecking people in the lower arenas. So the community list reflects that in a way because you have players from all arenas and voting based on their personal experience.

Thank you to everyone that filled out the survey! We read all of your comments and take encouragement that you appreciate the work we are doing. We love hearing the opinions from our readers and discussions that come about based on our tier list. We will always keep you in mind as we are working on content and future lists. As we start looking forward to 1.13 and wondering what that will bring, we are excited to see how the meta shakes up again and what might change. Make sure to join our discord for more discussion and let us know if you would change anything on the tier list!