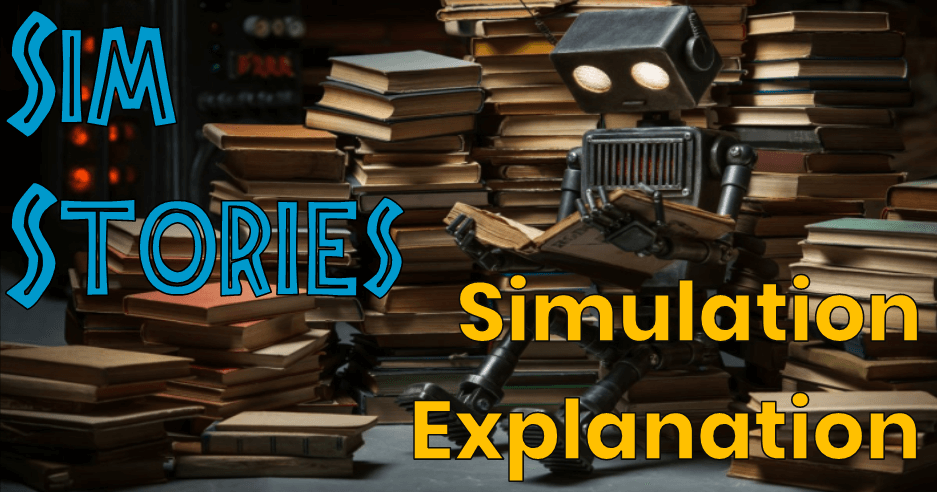 After my first couple of articles, I realized I might have jumped the gun a bit.  I got a lot of questions on how the sim works and most of them showed a fundamental misunderstanding of what was going on.  That’s not a bad thing! They were very reasonable assumptions that just happened to be incorrect. So I’d like to use this article to make sure everyone is on the same page when it comes to this series.

What The Sim Is

In short, the sim is a tool that analyzes 1v1 matchups between creatures.  I chose the words “analyze” and “matchup” very carefully here because that’s a more accurate description of what is happening.  MNBrain touched on this in his article, but I’d like to go into a bit more specifics. As he said, the sim isn’t really “choosing” moves in the sense that most people think.  What it’s really doing is looking at all the possible move paths for both creatures at once. When a path ends, a “score” is attributed to that end point. Higher scores are good for Player 1 (P1) and lower scores are good for Player 2 (P2).  After the entire tree is scored, the score of the “correct” path is used to determine the winner. This “correct” path is the closest thing to choosing moves that happens. Starting with the faster creature, each player continues down the path that leads to its best score. P1 moves to the highest score and P2 moves to the lowest.  With every move, the end goal for either player may change due to their original goal no longer being an option. So it adapts to its current situation and moves towards the best end at any given point along the way. When this dance is over, the resulting score is recorded as the end result of the whole battle.  Then, to account for RNG elements, this same process is run a bunch more times.

What The Sim Isn’t

The sim is not gospel.  I cannot repeat that enough.  It has shortcomings. There is room for improvement and there probably always will be.  1v1 matchups don’t exactly translate to 4v4. We’re looking at ways to make that gap smaller.  It doesn’t handle swap-in/swap-out properly. We’re looking at ways to account for that.  As improvements are made, the results might change.  And that's OK! It’s very difficult to incorporate some of these things without biasing the way it works.  It needs to be kept as simple as possible so that these human influences are minimal. It’s a thin line between creating a tool that results in realistic outcomes and forcing those results to conform to your perceptions of reality.

The Goal Of Sim Stories

My goal with these articles is to work within the boundaries of the sim in order to produce scenarios that closely mimic reality.  Then I look at the resulting data and report my findings. I do my best to translate the contextless numbers into usable information for everyone.  Again, this is not gospel. I am the one coming up with the rules for each sim used in these articles and I could be using a bad set of rules for the thing I’m trying to analyze.  That’s definitely something I try to avoid, but it happens. It’s also a very high level representation of an actual arena experience.

For example, there are 1,297 possible boost combinations for each creature at level 30.  That sim would take a whopping 1,682,209 times longer to run than an unboosted sim. To save time (and Matt’s PC) I had cut this down to 4 rough archetypes and made up some profiles focused on each stat along with one that was balanced.  Do these results tell you the exact ways to boost? Heck no! But it can show you patterns about what stats are important. So what if we had a creature with archetypes that performed like this in the sim:

Does that mean it has to have 15 speed boosts?  Nope. Well it at least means that pumping boosts into HP is the worst, right?  Maybe, but not for certain. Let’s do what humans do best and look for patterns.  The most obvious pattern I see is that as speed goes down, performance goes down. That tells me that this creature needs to be faster to perform optimally.  We can then look at the two cases where speed is equal and see that damage is ranked higher than HP. Now, honestly, two cases isn’t much of a pattern so I might not lend too much weight to that, but we can keep it in mind and see if any later data supports it.  Sim Stories isn't about telling you what to do, it's about showing you how to think.

I know it seems a bit disappointing to hear that I’m not going to tell you exactly how to boost your creatures in order to dominate the arena, but it’s just not that simple.  The best I can offer is to give you the tools to make an informed decision. And if you think the scenarios I set up are fundamentally flawed or misleading, by all means contact me and we can discuss it!  I try to filter this data for noise, but sometimes I might be the noise! That’s why I’ll always tell you The Rules I used to generate the data I’m looking at. It gives much needed context to a big pile of numbers.