Tied with Charizard X for highest Sp.Atk in the game with decent self buffs and great Speed to boot, in a vacuum the pair seems like far and away one of the game's best. Unfortunately for it, Charizard X's downright insane Passives and buffing potential completely outclass it in its main niche, and it simply can't compare to something like Pheromosa or Sceptile in the early game with its 2 bar moves before Mega. Still, it's the best flying type Striker we've got by a wide margin and is versatile enough to leverage its amazing lategame dps on a huge variety of teams. 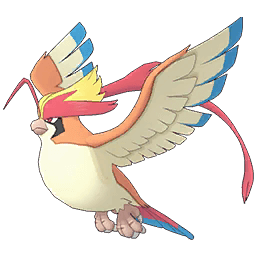 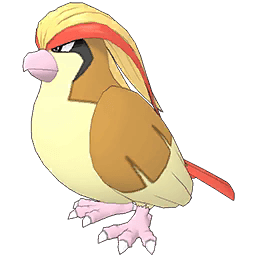 Pidgeot is an incredible Special Strike Pokemon, and Blue covers his partner's weaknesses spectacularly. Mega Pidgeot can get up to 403 Sp.Atk, making him a force to be reckoned with. This pair is a synergistic and self-contained wrecking ball waiting to happen, especially with teams built around them.

Similar to Houndoom, Pidgeot requires some special conditions be met before he can reach his full potential.

Pidgeot has one of the game's highest Sp.Atk values after triggering his Mega Evolution, and one of the highest Speed stats as well.

"Smell Ya Later!" boosts Evasion, Accuracy, and Critical Hit Rate, allowing Pidgeot to dodge many incoming attacks and hit back even harder.

Pidgeot's Accuracy and Speed can't be lowered thanks to his passives Haste and Acuity, which is an extremely valuable trait in many situations and ensures consistent performance.

Mega Pidgeot has some incredible offensive moves. Hurricane hits with an astounding 126 Base Power and can leave the enemy confused.

Air Cutter is AoE and strikes with an increased Critical Hit Rate.

Both moves are extremely powerful with Mega Pidgeot's Sp.Atk stat to back them up.

Hurricane is Mega Pidgeot's primary offensive move, but it only has a base Accuracy of 70%. This means Pidgeot requires an Accuracy buff or Rain Dance to be able to consistently land its main damage dealing move.

The latter isn't recommended since the Move Gauge is better spent buffing other aspects of Pidgeot while he raises his own Accuracy through "Smell Ya Later!".

Pidgeot is less efficient for quick encounters. Optimally, Pidgeot should plan around Mega Evolving and therefore stick to longer battles.

Pigeot really benefits from a Team that buffs Speed and Critical Hit Rate. Roxanne and Phoebe are great Teammate options because of this. These two take care of the Critical Hit Rate and Speed, and Nosepass also buffs Sp.Atk and Defense. See our Blue & Mega Pidgeot Team Composition Guide for a more detailed examination of how to build around this pair specifically!

Become Mega Pidgeot until the end of battle.