Abomasnow’s Offensive capabilities are very low, meaning Abomasnow is meant to play more of a Defensive Role. But as a Tank, Abomasnow can increase her Sp. DEF, but her Moves are costly and may not always be worth it. 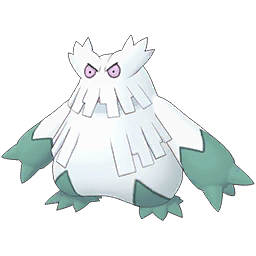 It blankets wide areas in snow by whipping up blizzards. It is also known as “The Ice Monster.”

Freeze
Speed Up: Self
Hail
Variable Move Gauge Use
Attack Up: Self
Sp. Def Up: Self
Freeze Immunity
Hailstorm Immunity

Abomasnow is a fairly powerful Ice Type Tech Pair with a solid moveset that is held back by its overall poor base stats. That being said, its rare typing, self-sufficiency, and ability to function without critical hit buffs give it a powerful niche in co-op where it is one of the most powerful Ice Type damage dealers and is an incredible option as an engine to set up hail and support its teammates. Overall, Abomasnow is a solid investment as a three star damage dealer with a unique niche that allows it to really shine in the right situations.

Powerful Ice Type damage dealers are few and far between, and Abomasnow’s three star rarity makes it a reliable, easy to aquire choice for an ice type striker on any co-op oriented player’s account. Especially going forward as many dragons are likely to be added to EX Challenges, ice type damage dealers are quite valuable.

Abomasnow’s access to X Speed and its unique move, It’s All About Focus! allows it to buff itself up to the point where it can do considerable amounts of damage without help from a support pair or the use of a Critical bonus, which not only allows it to be used to its full potential even in solo queue but also to deal full damage to raid bosses who are immune to Critical Hits and to benefit from Dire Hit All buffs against bosses who can be Critically Hiit. These qualities make it an extremely reliable pair that doesn’t require any sort of special team setup to be a powerful source of damage.

Another thing that sets Abomasnow apart from its contemporaries is its ability to reliably and easily set up hail while remaining a powerful member of the team in its own right. This lets it perform double duty as a support to pairs who can make use of hail and a self-sufficient damage dealer, something not many other ice pairs can claim to do.

While Abomasnow’s powerful moveset and typing make it a formidable pair, it is kept out of the upper echelon of damage dealers by its incredibly low base stats. While it can make up for this through the utility of also being a hail setter, its Attack stat of 182 means it should only be used as a primary striker against bosses weak to ice and its low bulk holds it back as a primary support.

Abomasnow’s ability to set hail makes it an incredible teammate for any pair with the ability to take advantage of the weather. Past that, its lack of a way to buff its own Critical Hit Chance makes Dusclops an excellent teammate for it since it can use its Dire Hit All+ to max out Abomasnow’s Critical Chance, greatly increasing its damage output.

Ice Punch
Has a very small chance of leaving the target frozen.

X Speed
Sharply raises the user’s Speed.
Hail
Causes a hailstorm.
It’s All about Focus!
Uses a maximum of three slots of the user’s move gauge. Based on the amount used, this move raises both the user’s Attack and Sp. Def by up to four stat ranks.
Hide Info

The power of this move is increased during a hailstorm.

Prevents the Pokémon from becoming frozen.