As undoubtedly the best of the game's Dauntless Draco Meteor archetype, Clair fills a solid, though small niche as the go-to for early game Dragon Type Special damage. Although it loses out to chief rival and fellow f2p unit Haxorus in terms of sheer flexibility (the latter's constantly repeatable self buffs make it an omnipresent force in the Villa), it makes up for this in the sheer damage Paralysis Synergy Draco Meteor dishes out. On top of passable stats, awesome Rain synergy, and the power of Paralysis, this is enough to make Kingdra the one time use nuke yin to Haxorus' consistently increasing damage yang, and both are excellent candidates for your hard-earned tickets and candies (which to go for first depends on your roster's needs, but Haxorus is generally considered the more overall useful pair, especially for new players). 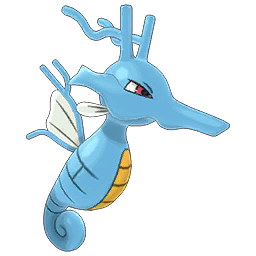 Kingdra lives at extreme ocean depths that are otherwise uninhabited. It has long been believed that the yawning of this Pokémon creates spiraling ocean currents.

Paralysis
Sp. Atk Up: Self
Crit Chance Up: Self
Normalize Lowered Stats
Rainy Move Gauge Up

Kingdra is a very polite Pokemon because she doesn’t just help her own Team, she helps the Enemy Team as well by reducing her own Sp. ATK, and removing her own Buffs when removing Debuffs.

Her stats are average across the board and while Rainy Day 2 is a great Passive Skill when Teamed with Rainy Day casters, there aren’t many arguments beyond that to add her to a Team.

Dragon Breath and Kingdra’s Sync Move are both pretty strong, and the former has a moderate chance of Paralyzing the Enemy. While Draco Meteor is also quite powerful, it and “X Sp. ATK” should be used in turns to ensure Kingdra’s Sp. ATK doesn’t drop too low.

“Victory Is Mine!” may remove Debuffs, but it also her Buffs Buffs too, so “X Sp. ATK” shouldn’t be used unless all uses of “Victory is Mine!” are used to avoid canceling her own Buffs. The one advantage to this Move is that it increases Critical Hit Rate with each use.

It doesn’t help anything that Draco Meteor also sharply reduces her Sp. ATK.

In the main Pokemon series, it’s pretty normal for Dragons to be weak against Dragon Type Moves, but in Pokemon Masters where each Pokemon only has one weakness, Clair & Kingdra are actually the only currently playable Sync Pair weak to Dragon Type Moves.

While there’s a more varied roster of Enemy Pokemon, Kingdra’s counterintuitive toolkit is just as much a disadvantage as the Enemy’s Moves.

Her Racing Rain 2 Passive Skill makes Kingdra a good Teammate for Rainy Day casters. Her Speed isn’t too bad either, so It’s not likely to slow anyone down.

Dragon Breath
Has a moderate chance of leaving the target paralyzed. 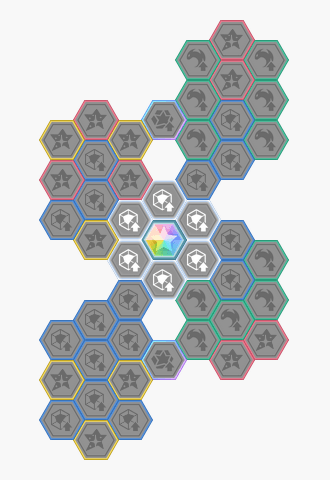