One of the strongest Legendary Sync pairs we've seen yet, Palkia is one of the few Strikers able to circumvent poor attacking stats through the sheer power of its moveset and Passive. While it does require a significant amount of Support to take advantage of Hydro Pump and Critical Strike 9's sheer power, pairs like Torchic and especially Alakazam that it synergizes with can transform the pair into a massively powerful early game force, while its dual typing and devastating Sync Move somewhat mitigate its issues with flexibility. 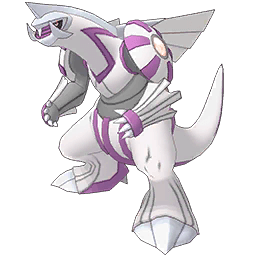 It is said to live in a gap in the spatial dimension parallel to ours. It appears in mythology.