Ariados' lack of a way to consistently apply Status along with its lackluster Stats and uselesness as a Damage dealer make it a highly impractical Pair that is hard to find a place for on any kind of Team Comp. 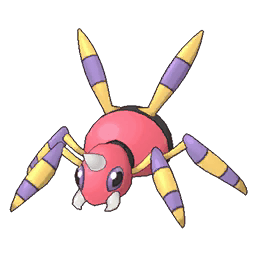 Every night, it wanders around in search of prey, whose movements it restrains by spewing threads before it bites into them with its fangs.

Ariados is a mixed bag of good Moves with poor RNG and stat distribution that could be better. Because of this, some Moves are used more to fix weaknesses than play up strengths. For a 3 star Pokemon, this isn’t too bad, but there’s always room for improvement.

Poisoning, even if the chance is small, is a great addition to a Move (ie., Cross Poison) that already guarantees an increased Critical Hit Rate. And even if it’s overly reliant on Poison, Venom Drench is still an extremely powerful Move--especially against Special Strike Enemies.

Hostile Environment 1 helps with that RNG too, so odds will only get better.

Cross Poison and Dire Hit both work to increase Ariados’ Critical Hit Rate, meaning that even if she isn’t always inflicting Poison, she will almost always land Critical hits.

“Move Like the Wind!” is a great Move, but it’s doing more to fix base stat weaknesses than work to Ariados’ strengths.

The Passive Skill Hostile Environment 1 helps to improve the low probability of inflicting Poison with Cross Poison, but it doesn’t fix the overarching problem of Ariados’ Venom Drench and Sync Move both relying on Poisoned Enemies to be effective.

A Supportive Teammate with “Dire Hit All” or “X Speed All” would be a great help for Ariados’ strengths and weaknesses.

Regardless, the more Teammates with Hostile Environment Passive Skills, the better.

This move’s power increases if the target is poisoned or badly poisoned.